Watson alumnus honored with BOLD 10 Under 10 Award at Homecoming

Associate Professor Shahrzad “Sherry” Towfighian served as a mentor for Mark Pallay during his time at Binghamton University earning his BS, MS and PhD in mechanical engineering. 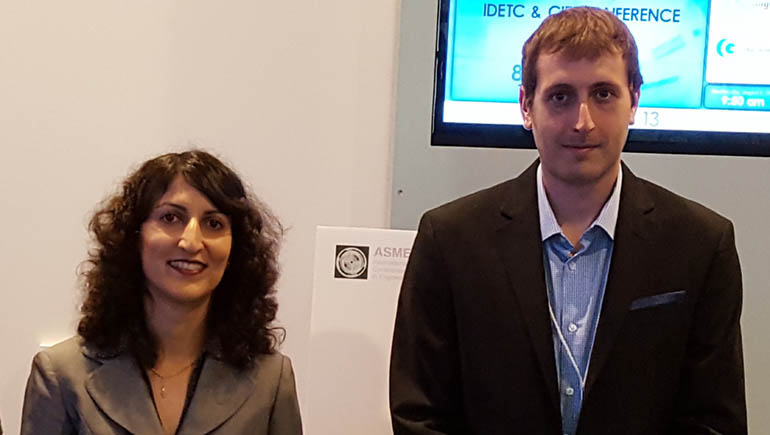 Associate Professor Shahrzad “Sherry” Towfighian served as a mentor for Mark Pallay during his time at Binghamton University earning his BS, MS and PhD in mechanical engineering.
By Chris Kocher

When he was very young — maybe 3 years old or so — Mark Pallay wanted to be an engineer. The kind that wears the striped cap and drives trains, of course.

By the fifth grade, he knew he would grow up to be a different kind of engineer, because he thought “the idea of building things and making things was really cool.”

During his first year as an undergraduate at Binghamton University’s Thomas J. Watson College of Engineering and Applied Science, he decided that mechanical engineering appealed to him more than other disciplines and pursued it with enthusiasm.

The Bearcats of the Last Decade (BOLD) 10 Under 10 Awards annually honor 10 special people who graduated from Binghamton University within the past 10 years.

The inaugural class of 10 Under 10 honorees will be recognized at a virtual event Friday, Oct. 16, during Homecoming week. Register in advance to receive a link to the Facebook premiere of the awards video.

And earlier this year, Pallay ‘14, MS ‘16, PhD ‘20, rounded off his 10-year academic career at Binghamton with his research work published in academic journals such as Applied Physics Letters, the Journal of Applied Physics and IEEE Transactions on Industrial Electronics. He also earned the Binghamton University Excellence in Research Award in 2018. Since February, Pallay has worked at Seagate Technology as a senior research and development engineer.

On Friday, he will add one more honor when he receives a Bearcats of the Last Decade (BOLD) 10 Under 10 Award as part of 2020’s Virtual Homecoming celebrations.

As a high school student in Glenmoore, Pa. — a community of about 8,000 residents near Philadelphia — Pallay had SUNY schools on his radar thanks to his father, a New York City native who attended SUNY Albany.

While he initially looked at Penn State and Bucknell University, his dad encouraged him to look further north. He applied and was accepted to both Binghamton and Stony Brook, but he became a Bearcat because “I decided that Binghamton was the better school.”

He admits that his original plan was to earn his bachelor’s degree at Binghamton and look elsewhere for graduate school, but his relationships with ME faculty members such as Associate Professor Shahrzad “Sherry” Towfighian and Distinguished Professor Ron Miles persuaded him to stay for his master’s degree and doctorate.

With Towfighian as his PhD advisor, Pallay aided her and Miles with their research on microelectromechanical systems (MEMS), which are microscopic devices with moving parts that are often produced in the same way as electronics. In 2019, their papers earned key citations from other researchers. The paper, titled “Pairing electrostatic levitation with triboelectric transduction for high-performance self-powered MEMS sensors and actuators” and published in Applied Physics Letters, received the 2020 Adaptive Structures & Material Systems (ASMS) Best Paper Award in Materials and Systems. The award recognizes the significant contribution to the field of adaptive structures and material systems and is governed by the ASMS branch of the American Society of Mechanical Engineers.

“Mark Pallay was one of the most passionate PhD students in my group who worked very hard on his project and conducted world-class research,” Towfighian said. “He achieved scientifically important results that are published in top-tier journals. His efforts resulted in his dream job as a research and development engineer at Seagate.”

Working with Towfighian, Miles and other faculty and students at Binghamton taught Pallay a lot about the mindset of a researcher.

“If you’re doing everything right, it’s easy to assume that everything is there because you told it to be there,” he said. “Then when you start moving into the experimental world, things that are part of our everyday life are going to be there, and that feels like 10 billion little details about everything.

“As Professor Miles says, ‘Doing experiments is very humbling,’ and I really agree with that. There’s so much that goes into absolutely everything.”

At Seagate, Pallay’s group designs recording head suspensions in hard drives. He occasionally tackles projects that are more immediate, most that he oversees are slated for release five years or more down the road.

“When you intercept a project at a very early stage, there’s more room to innovate,” he said. “If my group wants to integrate a MEMS device into the suspension to help with specific issues, my team is the one that will take that on.”

Although designing hard drives might seem quite different from his PhD work on a new kind of MEMS, the fundamentals of dynamic mechanical systems are what connect them — and that knowledge and attention to detail are things he learned at Binghamton.

“There are a lot of dynamics that need to be figured out in these devices,” he said. “The analogy my manager uses is that it’s the equivalent of needing to hold on to a 50-foot pole in a 100 mph crosswind and trying to keep the tip of it centered over a quarter. Tremendous precision is required.”