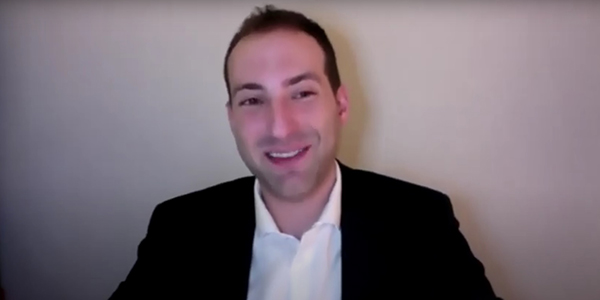 Though technology to create landmines has evolved over the last 100 years, for the most part, the methods of detecting them haven’t. Timothy de Smet and Alex Nikulin ‘05, two faculty members in Harpur College, have been working to change that.

They attached a thermal imaging camera to a cheap drone and tested this combination in a rubble field. The drone picked up on 90 percent of its intended targets. While 100 percent would be better, 90 is near enough.

“We don’t need to find all the mines,” said Nikulin, assistant professor of geological sciences and environmental studies. “We just need to find one…because once we find one, we can narrow down that area and declare it hazardous. That tremendously helps the demining organization because now they can prioritize their tasks.”

This is one of the research projects that alumni and friends learned about during TIER Talks, an Alumni Association-sponsored speaker event held Oct. 15 during the University’s virtual Homecoming week. The Zoom webinar showcased the work of four faculty members whose projects are supported by the Harpur College Advocacy Council Faculty Development Endowment. This grant program is funded by alumni donations and makes possible a wide range of research and creative projects by Harpur faculty.

“Support for faculty research allows for recruitment and retention of outstanding faculty,” said Michael Kerner ‘86, co-chair of the Harpur College Advocacy Council. “It supports scholarly work and has a deep impact on the experience of our students. We know from our own personal experience at Binghamton that interaction with faculty is one of the most lasting positive impacts that our students can have on campus.”

Elizabeth Mozer, an assistant professor and theatre artist specializing in movement, has written three plays since coming to Binghamton in 2012. Through a creative process that emphasizes mindfulness and being in the present moment, she develops plays in which a physical text with dance movement is interwoven with, and has equal weight to, the written text.

Mozer focused her talk on her third play, Natural Causes, which revolves around issues of deforestation and the people putting their bodies on the line to prevent it.

“It’s about activists who are participating in embodied acts of civil disobedience to save the plants, trees and animals that are so essential to our life, health and our very existence,” Mozer said.

Bryan Kirschen ’07, MA ‘08, assistant professor of romance languages, literature and linguistics, started his talk with a letter one of his students received from her grandfather. When he read the letter out loud, the language sounded like Spanish. However, when Kirschen showed the letter on the screen, the writings looked almost like Hebrew. What he presented was actually a language known as Judeo-Spanish.

“When Jews were expelled from Spain in 1492, they settled in the Ottoman Empire, in today’s Greece, Turkey and Bulgaria,” Kirschen said. “Sephardic Jews preserved varieties of Spanish, what we call Iberian Romance languages, but the language developed due to contact with neighboring languages. Judeo-Spanish was the mother tongue of generations of Sephardim. The language is considered endangered, as nearly all speakers have assimilated to the majority language of their countries where they’ve lived for generations.”

Kirschen discussed his project which located, collected, transcribed and translated content written in Solitreo, the Hebrew-based script once used by Sephardim. An undergraduate research assistant helped decipher the content and build documentingjudeospanish.com.

See the video of this session on the Binghamton Learning Network website.