Becoming a doctor: Physicians and med students talk about what it takes 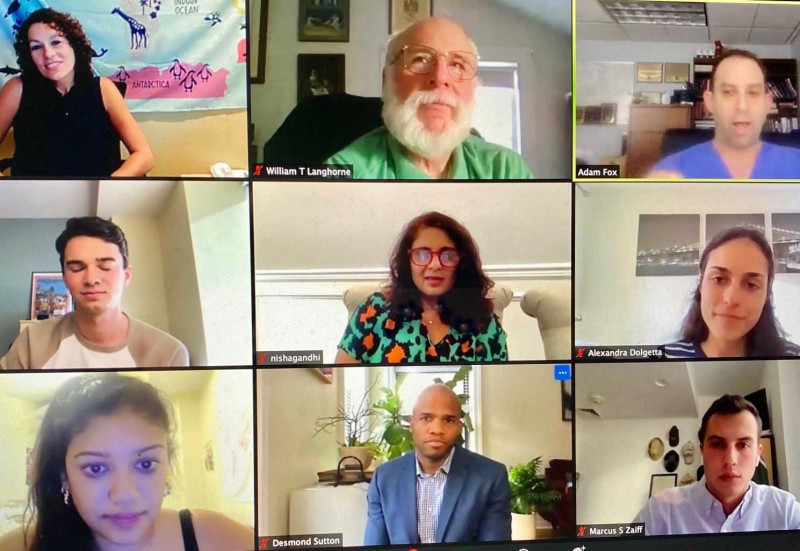 Pressured by her parents to study medicine, Nisha Gandhi ’93 was determined to become an actuary instead. But the math major’s equation for life worked out differently after she joined Harpur’s Ferry, Binghamton University’s student volunteer ambulance service.

“It became an obsession. I lived in Delaware Hall, next to where the ambulances were kept,” she said. “I found I really enjoyed doing emergency and critical care more than being at a desk and doing math problems.”

To fulfill her new dream, she did a year of graduate school to tackle her pre-med requirements, then enrolled in a Caribbean medical school before training in both the United Kingdom and the United States. Today, Dr. Nisha Gandhi is director of the medical-surgical intensive care unit at Englewood Hospital in New Jersey.

“There’s nothing like being at the bedside and taking care of patients. That’s how you learn critical care,” she said.

Interested in a health career? Check out your options via pre-health professions advising, or listen to first-hand accounts of life in medicine with the Physician Alumni Lecture Series.

She and several other Harpur alumni shared their stories of medical school and what comes after during the Oct. 23 Harpur Physician Alumni Panel, “Grey’s Anatomy vs. Reality.” Approximately 80 people attended the Zoom event, which is typically held in person during Homecoming Weekend.

Biological sciences is a popular major for future doctors, but as Gandhi’s story shows, it’s not the only one. Dr. Adam Fox ‘92, the event moderator, graduated from Harpur with a degree in political science. He’s currently an associate professor of surgery and section chief of trauma at Rutgers New Jersey Medical School and the Eric Munoz Trauma Center at University Hospital in Newark.

Contrary to popular belief, getting a less than spectacular grade in one of your classes won’t completely sink your medical school application. However, there are some limits, Fox explained.

“I did not do amazingly well in college and I went to podiatry school before I got my grades up,” Fox explained. “But there is a big push to look at how people do with tests. If they feel you can’t pass the boards, it’s a strike against you because residency and fellowship programs get dinged for it. You have to prove you can succeed in a very rigorous academic environment.”

Having a compelling story behind your medical school application can help you stand out, especially if you have a bad grade or two, advised Dr. Desmond Sutton ’10. His own story is particularly interesting: both he and his twin brother attended Binghamton and have since become physicians after attending different medical schools. Along the way, Sutton discovered his passion in high-risk obstetrics, and he’s now in the last year of a fellowship in maternal fetal medicine at Columbia University.

Many people typically take a gap year or several before medical school, but that wasn’t the case for Colin Pritchard and Alexandra Dolgetta. Pritchard, who graduated from Binghamton in May 2020, just started classes this fall at Upstate Medical University in Syracuse, where he is part of the Rural Medical Scholars Program. Dolgetta, who graduated in 2018, is now starting her rotations as a third-year medical student at the University of Maryland School of Medicine.

If you decide against taking a gap year, be prepared for interviewers to ask you about it, Dolgetta said. Once you get to medical school, the experience will be overwhelming, no matter how well you prepared, she said.

The first two years involve heavy studying; Dolgetta hit the books between 7 a.m. and 9 p.m. every day, with few breaks. She is enjoying her third year with its clinical rotations far more.

“You do all of this work to get into medical school. None of that compares to the work you do in medical school. It is truly daunting,” she said. “The hard work truly begins when you get here. You’ll be surprised at your capacity.”

Sometimes, people decide to go into medicine to make money — which is entirely the wrong reason, the panelists said.

While doctors are well-compensated, the debt burden is real, said Sutton, who started applying for 10-year loan forgiveness programs during his residency. That debt burden might influence your choice of specialty; Gandhi’s husband became an anesthesiologist rather than a pediatrician because he realized that he wouldn’t be able to pay off his loans before retirement if he chose the latter path.

Medicine is also immensely stressful. Trauma surgeons such as Fox deal with life-and-death scenarios, all-nighters and grieving families on a regular basis. Gandhi, who has three children, has missed family events and celebrations.

The tests don’t end with medical school, either, panelists said. To maintain their board certifications, physicians need to retest for them every 10 years — and they’re grueling eight-hour exams, Gandhi explained. She should know: she has four board certifications that she must test for.

Shadowing and internships are good ways to find out if medicine is a good fit for you. Pritchard shadowed a colorectal surgeon in Sayre, Pa., as well as the local doctor in his small hometown. Dolgetta’s best shadowing experience came through the Summer Physician Mentor Program, which paired her up with a Harpur College alum. After five years, they still keep in touch, she said.

Medicine is immensely challenging, but it is just as fulfilling to people who have the mission and the passion, according to panelists.

“You have to want to do it. Enjoy it, live it, love it,” Gandhi said of medicine.