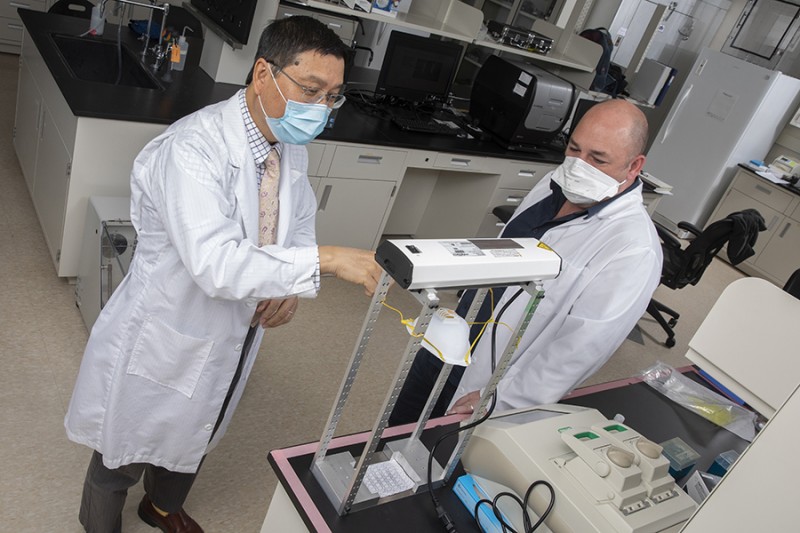 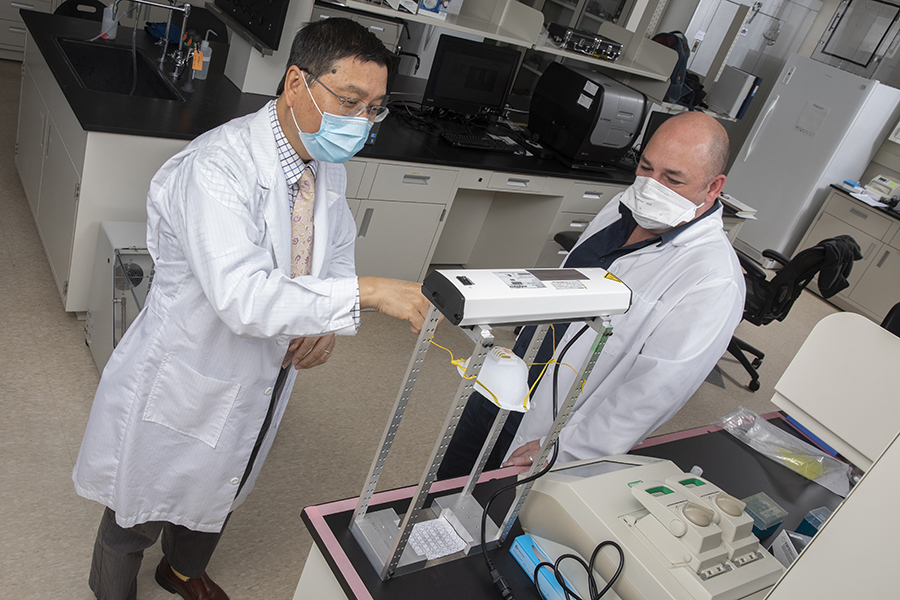 When the pandemic began, many Binghamton researchers hit back at it the way they knew best: They went into their labs or sat down at their computers and started thinking.

They asked big questions and they dove into scenarios few had considered previously. Can we build a face mask that diagnoses disease? Could nurses and doctors decontaminate their own protective gear? Do posts on social media offer a way to predict virus hotspots? What if we used drones to disinfect city streets?

The resulting innovations span a number of disciplines, from materials science to pharmacy and beyond. Several faculty members described their latest ideas and how they hope to make a difference as the world continues its fight against COVID-19.

SHINING A LIGHT ON STERILIZATION

A team of Binghamton engineers led by Kaiming Ye came up with a way to disinfect and safely reuse personal protective equipment (PPE), which continues to be in short supply. They devised stations with large ultraviolet lightbulbs and foil, and by mid-April, they had deployed the equipment at area hospitals.

However, the precise dosage required to do the job is unclear. The health effects of human exposure to various amounts of this light are also unknown. Ye, professor and chair of biomedical engineering, and Guy German, associate professor of biomedical engineering, received a one-year grant of nearly $200,000 through the National Science Foundation’s Rapid Response Research funding mechanism to answer these questions.

UV-C can sterilize PPE in small or large batches. It can even be used to disinfect an entire room, Ye says. He envisions providing medical professionals with a tool that will allow them to manage their own PPE sterilization and reuse.

“It’s the size of a refrigerator,” Ye says. “Every doctor’s office can have one of these systems. Masks, gowns, face shields can go into it. It’s very handy. They can sterilize anything they want to.”

Once people hear that UV-C light can kill the virus, it makes sense to think about using it on a much larger scale. Picture installing overhead lights in railway stations or airports, for example, or in classrooms.

There’s one major problem: No one knows how harmful UV-C light is for humans, especially for our skin and eyes. It may not be carcinogenic, but that’s not the same thing as saying it’s safe for people to be exposed to a lot of it.

“If you were to put these lights up in an airport, you wouldn’t have any SARS-CoV-2 around,” German says. “But you’d have lots of people with cracked, broken skin and a lot of infections.”

The Binghamton study will help to determine a safe and effective UV-C wavelength for use in clinical settings and in open spaces such as waiting rooms or subway stations. It might even establish an industry standard. Right now, it’s hard to know if UV cleaning devices sold online and in stores are safe or effective.

“The fundamental question,” German says, “is can we put these bulbs in the ceiling, or do we need to have robots and remove every human from the room to disinfect?”

Ye says answering that question will help people get back to life as we knew it before the pandemic.

MASKS THAT CAN DIAGNOSE DISEASE

What if the mask you have to wear in public could also tell you whether you’re getting sick or if there’s an increased risk of catching the SARS-CoV-2 virus from people nearby? That’s the goal of an interdisciplinary team that received seed funding from the Research Foundation of SUNY.

The team plans to develop an inexpensive, disposable mask with a sensor that analyzes respiratory patterns and identifies breathing signatures associated with respiratory disease. Data from the sensor would be sent to a smart phone, allowing users and healthcare providers to access information without special training.

“We’re focusing on low-cost materials that can be printed, much like a newspaper,” Mativetsky says. “There’s also a need for virus spread monitoring that goes beyond contact tracing. To address this, we will be collecting anonymous diagnostic information as well as location information to alert users about virus risk levels in their immediate surroundings.”

The group’s preliminary work on respiratory sensors shows that a thin layer of a soft gel material can be used to track breathing patterns. The scientists plan to print the gel onto mask materials.

The AI can already detect events such as coughing and talking in studies with a lab-bench prototype of the mask. Larger-scale experiments should enable the team to train the AI to diagnose specific respiratory illnesses, including COVID-19 as well as chronic obstructive pulmonary disease (COPD) and sleep apnea, based on breathing patterns.

Mativetsky sees the mask as a tool that would enable individuals to make better decisions about their own day-to-day activities.

“I think it’s very important for people to know when it’s OK to go to out,” he says. “We’re all wearing masks all the time. If you’re wearing this mask and it’s telling you when you’re starting to get some subtle signatures in your breathing that are looking problematic, that will allow you to make real-time decisions. Maybe you’ll stay home tonight or for a couple of days.”

In addition to people seeing their own information, data could be made available to healthcare providers to enhance telemedicine appointments. On a larger scale, if everyone in a hospital waiting room had a mask like this, the data might allow nurses and doctors to triage patients more efficiently.

“Can we keep COVID-19 patients alive longer so that their adaptive immune system kicks in and can resolve the infection?” asks Nathan Tumey, an assistant professor of pharmaceutical sciences.

That’s the pandemic research goal he set for himself along with Kanneboyina “Raju” Nagaraju, founding chair of pharmaceutical sciences.

Tumey’s background is in chemistry, while Nagaraju is an immunologist by training. Both have years of experience in drug development.

In fact, Tumey worked in the pharmaceutical industry for about 15 years before joining Binghamton’s faculty. Along the way, he developed an expertise and interest in a particular drug-delivery technology. Thus far that technology has been useful for treating cancer, and Tumey hopes that it may have applications in immunology as well.

Antibody drug conjugates, or ADCs, serve as a kind of homing device. They take a molecule that’s too toxic to be delivered systemically and bring it directly to certain cells. Seven ADCs have been approved by the Food and Drug Administration as cancer therapeutics.

Lung inflammation is ultimately the major cause of death for COVID-19 patients, Tumey says. One way to address that inflammation is to suppress Janus kinases, or JAKs, which are enzymes just downstream from a number of important cytokines that are being released in response to the lung infection.

Tumey and Nagaraju aim to shut down the JAK pathway in order to suppress inflammation.

It’s a strategy that is already used to treat rheumatoid arthritis, as well as other inflammatory diseases. The problem is that JAK inhibitors block adaptive immunity, our body’s ability to mount an immune response. That’s why they’re not typically used when a patient has an active viral infection.

Can JAK inhibitors be delivered to lung tissue while avoiding systemic exposure? The Binghamton team thinks it can be done, using an ADC to release the JAK inhibitors. They have seed funding from the Research Foundation of SUNY to explore the possibilities.