Subimal Chatterjee teaches an online class from his office in Academic A in April 2020. Image Credit: Jonathan Cohen. 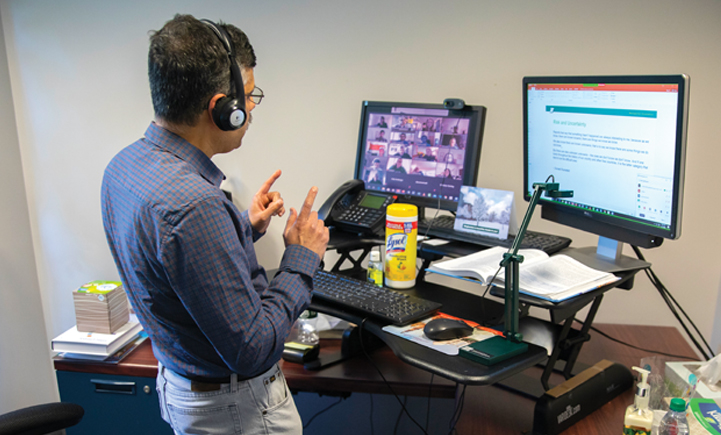 Subimal Chatterjee teaches an online class from his office in Academic A in April 2020. Photography: Jonathan Cohen.
By Allen Wengert

Alex Reksten ’20 realized during an early-March phone call that her senior year at Binghamton University was not going to end the way she originally anticipated.

The president of the School of Management’s PricewaterhouseCoopers (PwC) Scholars, she was discussing what to do about the group’s upcoming spring events with fellow members and firm relationship partners.

“I started that call looking at a completely packed calendar on my wall and by the end, nearly all of my obligations through May were crossed off,” says the business administration major. “I was devastated.”

It was the moment that the disruption the COVID-19 pandemic was about to cause became fully real to her. She wasn’t alone in beginning to prepare for the worst.

“By mid-February, I was pretty certain it was going to impact us in a major way,” says School of Management (SOM) Dean Upinder Dhillon. “It was just a matter of when.”

By the time the University officially announced on March 16 that in-person classes were over, SOM was ready to go virtual.

“We went into action pretty fast,” says Shelley Dionne, associate dean of SOM. “Once we got a handle on the top concerns of our faculty and students, the rest started to fall into place.”

With many instructors concerned about course continuance in light of a medical emergency, a “buddy system” was created. Each course had a backup instructor ready to step in at a moment’s notice.

Dionne says faculty were also sharing advice on what was and wasn’t working in the virtual teaching space. 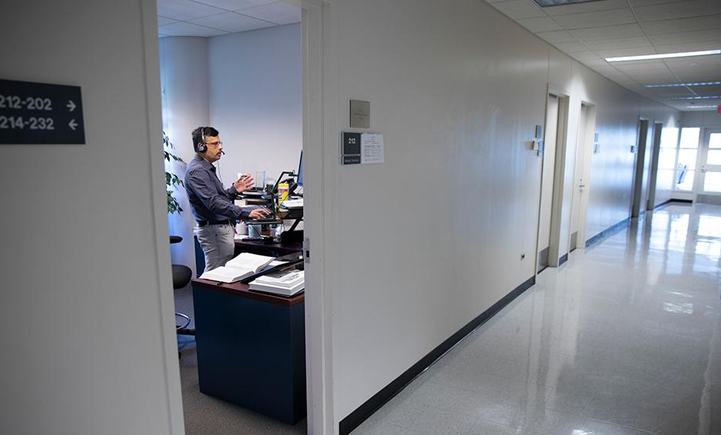 Subimal Chatterjee teaches his class, virtually, from his Academic A office in April 2020. Image Credit: Jonathan Cohen.
“This was new territory for most of us, but seeing everyone work together made me feel very comfortable as we transitioned into the virtual portion of the spring semester,” she says. “I’m so proud of the teamwork our school showed.”

While Subimal Chatterjee, SUNY distinguished teaching professor of marketing, had taught asynchronous online courses before, he admits that the sudden virtual transition took some getting used to.

“One day, there were 40 students sitting in front of me in a classroom. And just a couple of days later, I’m looking at a computer screen with 40 Zoom boxes that now represent these students,” says Chatterjee. “It was an adjustment.”

But after a few classes, Chatterjee began seeing advantages.

“With everyone’s name on the screen, I was able to easily ask targeted discussion questions directly to individuals,” he says. “Students who once stayed quiet in class were now asking questions within the chat feature in Zoom, meaning there was a new level of comfort that enabled them to participate in the discussion.”

Chatterjee says the feedback he was getting from his students was eye-opening.

“No matter how difficult it was for faculty, it was so much more difficult for students,” he says. “It was sobering to realize that not everyone had access to a high-speed internet connection or a laptop to take classes on or a home environment that’s suitable for learning.”

Reksten says it was the faculty’s understanding of student struggles that helped make the spring semester much better than it could’ve been.

“We no longer sat with our friends in class, studied in the library, played intramural sports or went to the gym. We lost a lot of things,” she says. “They were incredibly understanding of this, and for that, I am grateful.”

With in-person events now canceled, the SOM Career Services office got to work making sure students still had access to professional development opportunities.

“Students often swing by our office in between classes. Those impromptu visits have been important for us to make sure students know how we can help,” says Olivia Pasquale ’12, MPA ’17, director of internal operations. “We wanted to provide that same level of accessibility.” 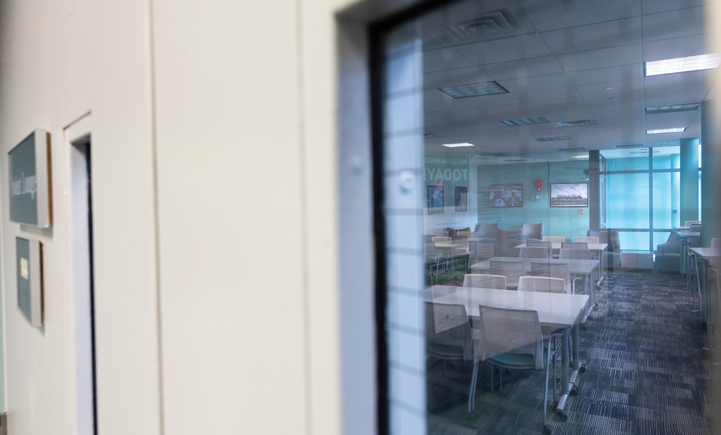 The SOM student lounge, typically one of the busiest areas in Academic A, is completely empty after classes went virtual in March 2020. Image Credit: Jonathan Cohen.

With everything from employer visits to networking events to office hours now taking place on videoconferencing platforms, Pasquale says she was surprised at how well things worked out.

“The world flipped upside down so quickly, but not much changed for our office in terms of the services and opportunities we provide to our students, who really made the most of it,” she says.

Pasquale feels optimistic about the long-term impacts the shift to virtual will have on recruitment.

“This made us really think outside the box to develop new opportunities that will benefit both our students and the employers that hire them,” she says.

With placement of graduates a major priority, alumni were asked to assist in finding jobs and internships for SOM students.

“We’ve worked hard to create a community mindset for the School of Management,” says Dhillon. “We want our students and alumni to feel part of this community long after they’ve left Binghamton. It’s a community where we help each other, and everyone ultimately benefits.”

The necessity of empathy

With so much still unknown about the full impact of the pandemic, Chatterjee sees this as an opportunity to innovate.

“It’s an exciting time to be a teacher in the sense that we, too, are learning so much,” he says. “I think the long-term adoption of some level of virtual education improves accessibility. Education is easier to share now. There will be bumps in the road, but we’ll adapt and make this a good learning environment.”

Dhillon says the School of Management will ultimately become a better school because of this experience.

“This has brought about an acceleration of our strategic vision. We’ve been heading toward more technology adoption and an analytics curriculum, but this has given us a sense of urgency to get there faster,” he says.

Dhillon says that while the pandemic is unlike anything he’s ever dealt with as dean, the strength of the SOM family gave him confidence throughout.

And while she graduated from college away from her friends, Reksten says the experience has made her feel even more connected to the Binghamton community.

“I believe the necessity of empathy was the greatest area of growth for me,” she says.

“Despite there existing greater distance between us than ever, I felt as though I could see my peers and professors more clearly than ever.”