Neanderthals had the capacity to perceive and produce human speech 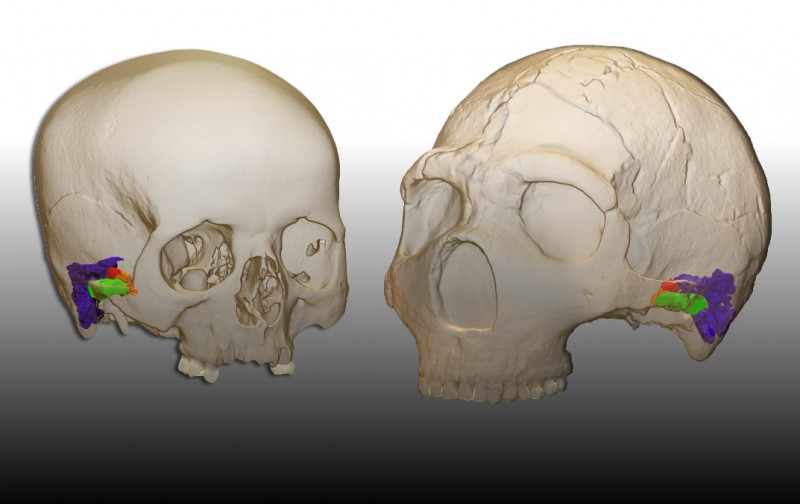 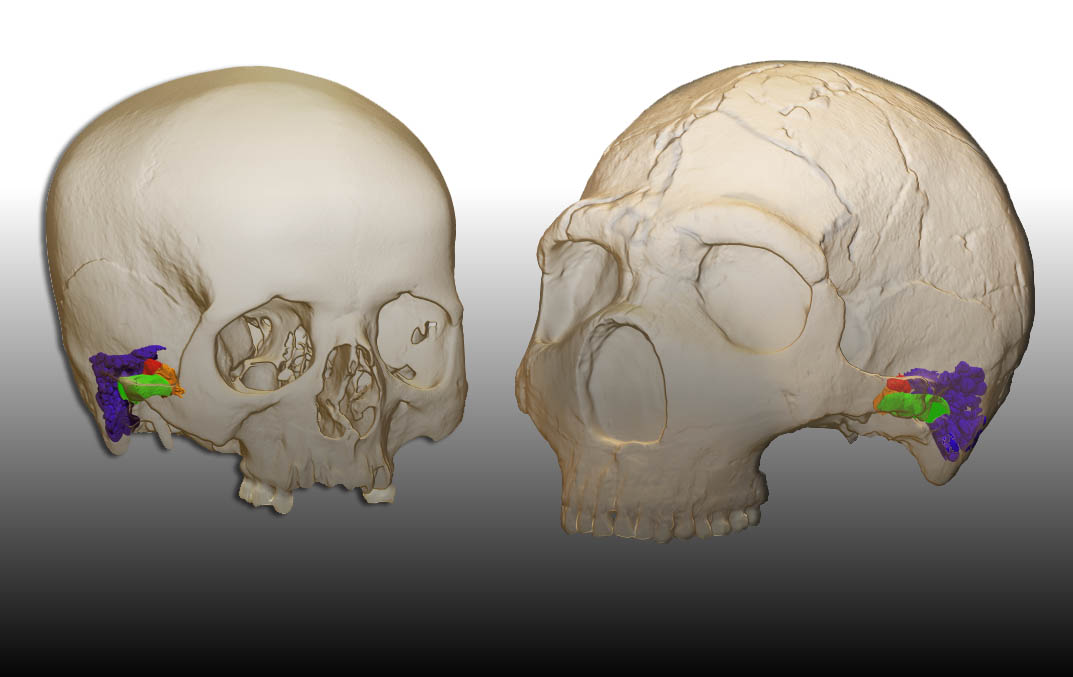 3D model and virtual reconstruction of the ear in a modern human (left) and the Amud 1 Neandertal (right) Image Credit: Mercedes Conde-Valverde.

Neanderthals — the closest ancestor to modern humans — possessed the ability to perceive and produce human speech, according to a new study published by an international multidisciplinary team of researchers including Binghamton University Associate Professor of Anthropology Rolf Quam and graduate student Alex Velez.

“This is one of the most important studies I have been involved in during my career,” said Quam. “The results are solid and clearly show the Neanderthals had the capacity to perceive and produce human speech. This is one of the very few current, ongoing research lines relying on fossil evidence to study the evolution of language, a notoriously tricky subject in anthropology.”

The evolution of language, and the linguistic capacities in Neanderthals in particular, is a long-standing question in human evolution.

“For decades, one of the central questions in human evolutionary studies has been whether the human form of communication, spoken language, was also present in any other species of human ancestor, especially the Neanderthals,” said coauthor Juan Luis Arsuaga, professor of paleontology at the Universidad Complutense de Madrid and co-director of excavations and research at the Atapuerca archaeological sites in northern Spain. The latest study has reconstructed how Neanderthals heard to draw some inferences about how they may have communicated.

The study relied on high resolution CT scans to create virtual 3D models of the ear structures in Homo sapiens and Neanderthals as well as earlier fossils from the site of Atapuerca that represent ancestors of the Neanderthals. Data collected on the 3D models were entered into a software-based model, developed in the field of auditory bioengineering, to estimate the hearing abilities up to 5 kHz, which encompasses most of the frequency range of modern human speech sounds. Compared with the Atapuerca fossils, the Neanderthals showed slightly better hearing between 4-5 kHz, resembling modern humans more closely.

In addition, the researchers were able to calculate the frequency range of maximum sensitivity, technically known as the occupied bandwidth, in each species. The occupied bandwidth is related to the communication system, such that a wider bandwidth allows for a larger number of easily distinguishable acoustic signals to be used in the oral communication of a species. This, in turn, improves the efficiency of communication, the ability to deliver a clear message in the shortest amount of time. The Neanderthals show a wider bandwidth compared with their ancestors from Atapuerca, more closely resembling modern humans in this feature.

“This really is the key,” said Mercedes Conde-Valverde, professor at the Universidad de Alcalá in Spain and lead author of the study. “The presence of similar hearing abilities, particularly the bandwidth, demonstrates that the Neanderthals possessed a communication system that was as complex and efficient as modern human speech.”

“One of the other interesting results from the study was the suggestion that Neanderthal speech likely included an increased use of consonants,” said Quam. “Most previous studies of Neanderthal speech capacities focused on their ability to produce the main vowels in English spoken language. However, we feel this emphasis is misplaced, since the use of consonants is a way to include more information in the vocal signal and it also separates human speech and language from the communication patterns in nearly all other primates. The fact that our study picked up on this is a really interesting aspect of the research and is a novel suggestion regarding the linguistic capacities in our fossil ancestors.”

Thus, Neanderthals had a similar capacity to us to produce the sounds of human speech, and their ear was “tuned” to perceive these frequencies. This change in the auditory capacities in Neanderthals, compared with their ancestors from Atapuerca, parallels archaeological evidence for increasingly complex behavioral patterns, including changes in stone tool technology, domestication of fire and possible symbolic practices. Along these lines, the study provides strong evidence in favor of the coevolution of increasingly complex behaviors and increasing efficiency in vocal communication throughout the course of human evolution.

The team behind the new study has been developing this research line for nearly two decades, and has ongoing collaborations to extend the analyses to additional fossil species. For the moment, however, the new results are exciting.

“These results are particularly gratifying,” said Ignacio Martinez, a professor at Universidad de Alcalá in Spain. “We believe, after more than a century of research into this question, that we have provided a conclusive answer to the question of Neanderthal speech capacities.”

The study, “Neandertals and modern humans had similar auditory and speech capacities,” was published in Nature Ecology and Evolution.