The dog days of campus: Yfke Havinga raises guide dogs for the blind 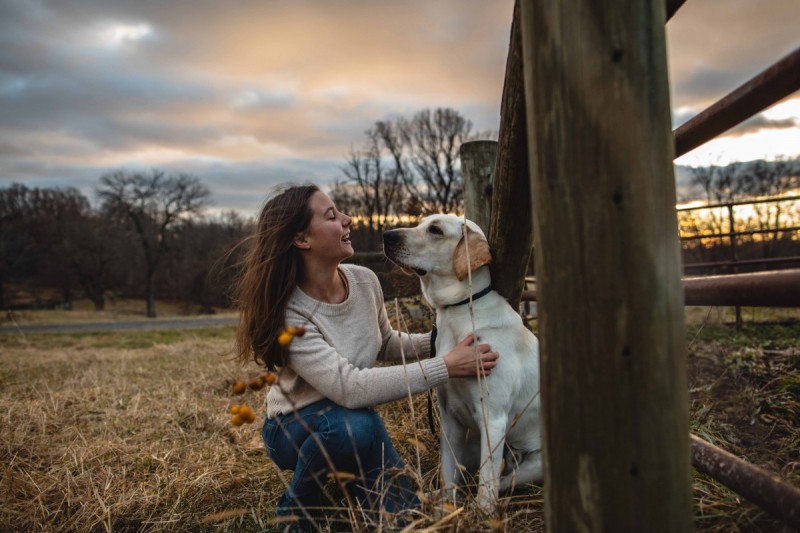 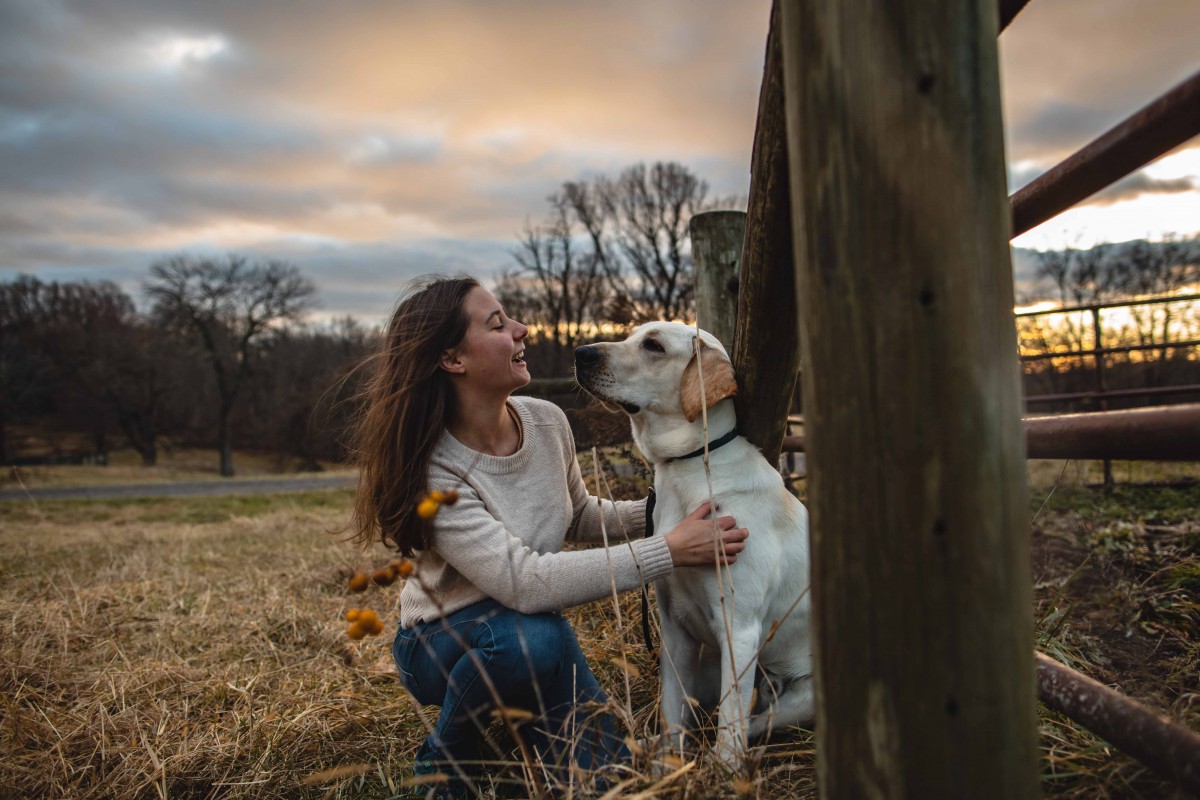 Stan didn’t participate in discussions during his Binghamton University classes, or pitch in during group projects. When the lectures began, he typically would close his eyes and snooze on the floor.

Behavior like that helped him earn his degree from Guiding Eyes for the Blind last year. Today, the yellow Labrador retriever is employed in New Jersey, where he helps a blind human companion navigate the realities of day-to-day life.

Yfke Havinga, the biological sciences major who brought Stan to class and taught him the basics of guide dog life, will graduate herself this May. From there, it’s on to veterinary school; she’s been accepted to three so far, and has chosen to attend Ohio State University’s College of Veterinary Medicine.

“It’s so much more than cuddling animals all day,” she said of becoming a veterinarian, a lifelong goal. “I have a really strong passion for science, caring for animals and working with people, and veterinary medicine really gives me the opportunity to have all those in my work career.”

A native of Larchmont in Westchester County, Havinga didn’t have a dog when she was growing up, so she would walk, play and train her neighbors’ dogs after school. She first became involved with socializing future guide dogs when she was 14; she would host six- to eight-week-old puppies during weekends, teaching them about household life and starting their potty and kennel training.

In her junior year of high school, she became a certified puppy-raiser and received the first of her yellow Labradors, Dax, in 2017. Raising dogs turned out to be a family affair, from the canine end: Stan is Dax’s son and her current guide dog-in-training, Lancelot, is Dax’s grandson.

Training actually begins before a guide dog is even born; their parents are chosen for health, temperament, and the drive and eagerness to please required in a guide dog. Humans handle the puppies from the very start so that they become accustomed to seeing and experiencing new things. At eight weeks old, puppies are tested by Guiding Eyes to see whether they would be suited for a guide dog career, or if they would fare better as family pets.

Based on their personalities, the puppies are then matched with volunteers who work with them until the dogs are 16 to 18 months old. Puppy-raisers teach the dogs basic commands, but above all expose them to new and sometimes challenging situations — schools, subway trains, the grocery store, the airport, the doctor’s office.

“The ideal for a puppy once they go into training is for them to have seen so much of the world that when they see a new object or go into a new place as a guide dog, they think, ‘That’s old news; I’ve done things like this before. I know how to behave and how to handle the situation,’” Havinga explained. “So that’s why, as a puppy-raiser, we expose our puppies to everything we possibly can.”

After this period, the dogs face another battery of tests. The very best — such as Dax — go into breeding. The rest begin harness training, their last step before being assigned to a human companion.

A fellow volunteer based in New Hampshire raises puppies until they are around four to five months old before giving them to Havinga, who finishes their training. Just like Binghamton students, future guide dogs take part in a graduation ceremony. Once the young dogs go on to the next phase of their training, Guiding Eyes for the Blind continues to update the volunteers on their progress.

Binghamton proved a useful learning experience for Stan, who attended classes and club meetings with Havinga in fall 2019 and spring 2020. (Luckily for Stan, he graduated from his own program before the University transitioned online after the start of the pandemic.)

Havinga first received permission from her professors to bring the dog to class, and explained the situation to her peers. They were asked to simply pretend he wasn’t there — which is typical for service dogs — unless Havinga granted permission for them to greet him.

For Stan, class time was largely naptime; settling down and waiting is an essential skill for guide dogs. He had some fun, too, such as when Havinga dressed him up as Big Bird for Halloween. He met Baxter the Bearcat twice, navigated busy corridors and saw a few basketball games.

“The campus fostered an awesome experience for Stan, who was learning what the world was like on a very busy campus,” Havinga said.

That college experience is coming in handy for Stan, who now accompanies his human in the Princeton University area. There are new challenges: he is now part of a family with children, for example.

Stan will retire after eight to 10 years of guide dog work. After that, he may be adopted by his current human companion or one of the volunteers; there is a lengthy waiting list to adopt retired guide dogs, who will live out their remaining years as family pets.

“Just like humans, they deserve the chance to retire and live out their golden days in a sunny spot on the floor,” Havinga said.

While having Stan was definitely a highlight, Havinga’s Binghamton experience was rewarding in its own right. She was initially attracted to Harpur College for the strength of its biological sciences program and its long tradition of liberal arts, which gave her the opportunity to widen her breadth of knowledge, she said. She loved the campus community, too, from her first visit.

“I’m really happy that I ended up going here; it’s exactly what I wanted from my college experience,” she said. “I’m excited to go to veterinary school, but I’m also sad that I will be leaving my second home.”

Professors who have made a difference for Havinga include lecturer Sarah Marcus and cell biology and histology technician Nancy McGee. Marcus proved a font of advice for Havinga’s veterinary future, while McGee made animal histology — now called tissue biology, a notoriously difficult course — a positive experience.

“She really makes every student feel important. It’s so awesome to know that, even though she’s high up in the administrative chain, she still wants to know what’s happening on the ground as a student,” Havinga said.

Prior to Havinga’s request, the University had no policies that covered this unique type of work, said Fiore-Conte, who put together a pilot program. She stayed in close touch with both Stan and Havinga, who followed the plan to the letter.

“She did amazing work and embodies what it is to be a Binghamton student. Yfke and Stan were pleasures to work with,” Fiore-Conte said.

Havinga has aided her peers as a teaching assistant and particularly loved those moments when she watched her fellow students grasp difficult material. She also enjoyed helping newer students become part of the campus community, fostering bonds that can last a lifetime. Outside of the classroom, she is president of the Pre-Veterinary Society and vice president of the campus’ chapter of the Alzheimer’s Foundation of America.

While the coronavirus pandemic has upended the normal course of her senior year, she isn’t attending her online classes alone. Meet her current trainee, Lancelot; five months old when he arrived in June 2020, he is now 14 months old and getting closer to a graduation of his own.

The pandemic has shaped his education, too, with opportunities for socialization unfolding more slowly than usual. Still, he took to the harness like a pro, Havinga said.

“He is super-sweet and eager to please, and has quite a goofy side to him. He’s really been a ray of sunshine during COVID,” she said.