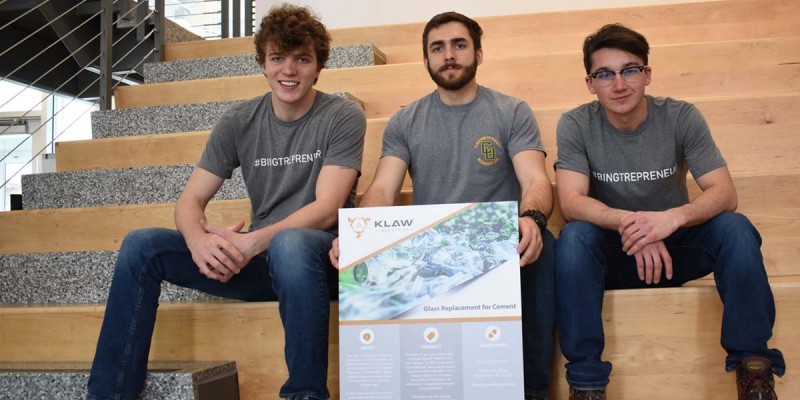 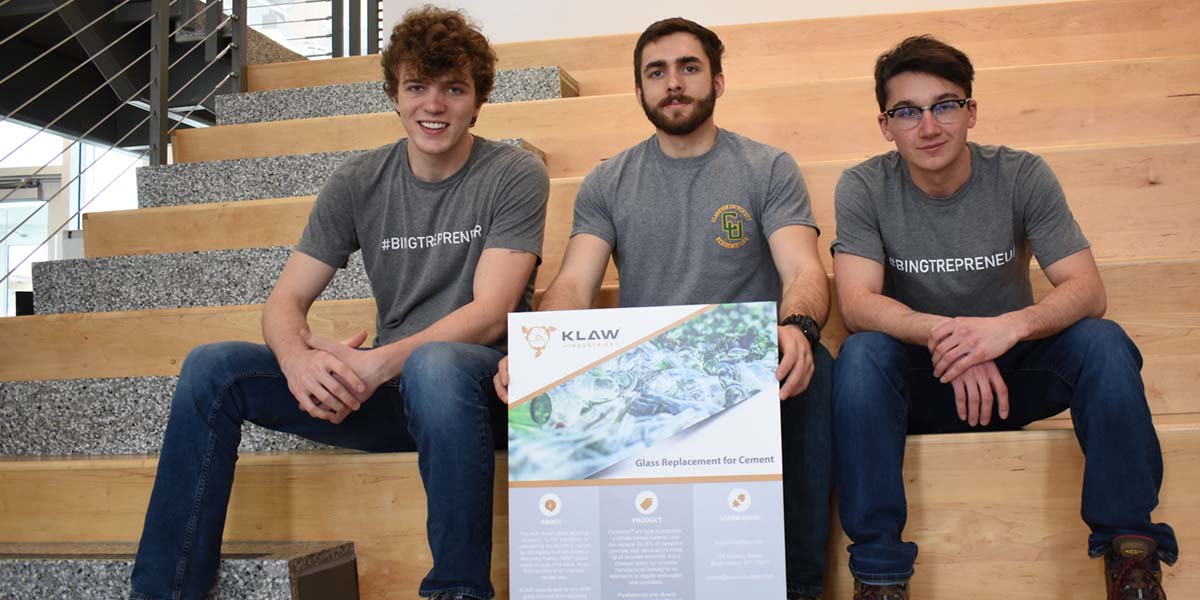 Binghamton University junior Jacob Kumpon did not wait until after graduation to start up his first company. KLAW Industries was founded by three friends from the Binghamton area and processes contaminated glass from recycling facilities into Pantheon, a cement replacement for use in concrete.

The acronym “KLAW” derives from the last names of all of the founders of the company.

As they attended Chenango Forks High School together, Kumpon said. “we all knew we wanted to start a business together. It seemed like a good idea, because we all work the same way. We played around with a few ideas, but we weren’t sure what we wanted our business to be.”

The friends looked into a possible technology field, but after six months they decided that it wasn’t working out the way they had hoped. Then in early 2019, they dedicated themselves to learning about the recycling industry.

“We just called recycling facilities,” Kumpon said, “and asked them for a tour.”

Many of the facilities gladly showed the group around, explaining how objects get recycled and how that process is sometimes contrary to many common beliefs. According to the federal Environmental Protection Agency, 75% of trash was deemed recyclable in 2015, but only 30% of it was properly recycled.

“What stuck out to us the most,” Kumpon said, “is that the glass that you put into the recycling bin is not always recycled. A lot of the time, it just ends up going straight to the landfill. Recycling facilities have a hard time finding suitable end markets for this glass; no one wants to send this glass to the landfill.”

That information sparked the plan for KLAW Industries. The friends found their motivation and knew that it was their time to make a difference.

“We built a process to remove the contamination from the glass, but then needed to find markets for recycled glass,” Kumpon said.

After doing more research, they learned that decontaminated glass could be used as a cement replacement in concrete. That idea had only been done in a lab, because no one was able to do it economically.

Clean glass is expensive, since it can be used to make new bottles or fiberglass insulation. This high price for raw material kept glass cement replacements out of the concrete market. However, KLAW Industries uses contaminated glass, a low-cost item, and removes the contaminations to reach the highest purity standard of the concrete industry.

“Since we are working with recycled glass, we are able to provide our cement replacement Pantheon at a lower cost than alternatives in the industry, such as fly ash and slag,” Kumpon said.

Pantheon is able to increase the compressive strength in concrete and also has a lower carbon footprint — all while being cheaper than traditional concrete.

The future of KLAW Industries is bright. The three friends already have won multiple competitions with their concepts and business plan, including $40,000 in Texas Christian University’s International Values and Ventures Competition and another $10,000 from the University of Georgia-Athens Next Top Entrepreneur Competition. KLAW Industries also has received both federal and state grants.