Revisiting the past 75 years 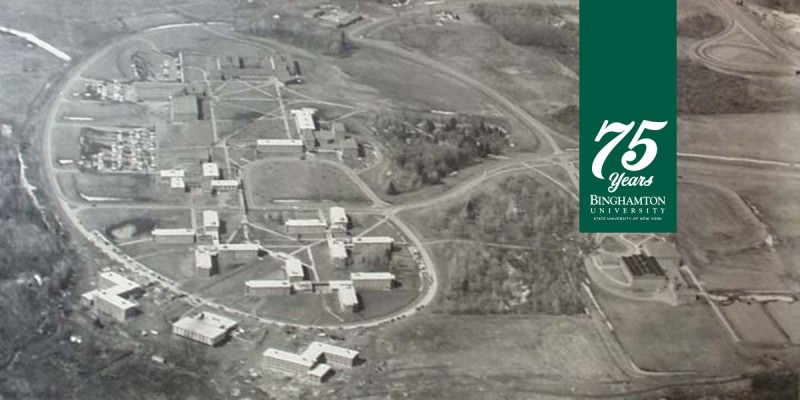 It nearly slipped by us, but June 6, 2021, was Binghamton University’s 75th anniversary.

It was June 6, 1946, when the University was officially launched as Triple Cities College (TCC) of Syracuse University with a dinner at the Arlington Hotel in Binghamton. The then two-year school opened its doors to 876 students on Sept. 30 of that year (Convocation was held Sept. 28), with Old Colonial Hall in Endicott, N.Y. as its base of operations.

Since then, as they say, the rest is history.

Four years later, TCC severed ties with Syracuse, took the name of Harpur College and was dedicated officially on Oct. 6, becoming the only liberal arts school in the SUNY system, after the closing of Champlain College in Plattsburgh.

Under its first president, Glenn G. Bartle, the school — now a four-year institution — flourished. Property was acquired in nearby Vestal, and, by 1961, the final move from Endicott was completed. The main campus now encompasses 930 acres, including the 190-acre Nature Preserve; the Innovative Technologies Complex adds another 20 acres; the Health Sciences Campus adds 15; and the University Downtown Center adds 2.5 acres.

In 1965, the University was designated one of the four University Centers in the SUNY 64-campus system.

Over the decades, Binghamton University has undergone several name changes, settling on its current popular name of Binghamton University in 1992; it has also grown from those original 876 students to over 18,000 students today, who now earn bachelor’s, master’s and doctoral degrees. (The first doctoral degrees conferred were to Roger Hekinian in geology and Marylou Korcykoski Lewandowski in English, in 1969.)

Growth also came through the addition of professional schools:

But growth can be measured in other ways as well. Seventy-five years ago, Binghamton University was established to educate GIs returning from the war. Since then, its educational mission has remained the same, but its vision has expanded to encompass research as a driving force for both education and discovery. The University achieved R1 (“very high”) research status by the Carnegie Classification of Institutions of Higher Education in 2019, and now annually sees more than $45 million in research expenditures.

And on the fundraising side, Glenn Bartle would not likely have predicted the successes the University has earned since SUNY campuses began fundraising operations in the 1990s. The University’s giving history indicated just over $1.6 million was raised in fiscal year 1991. Now, after two successful comprehensive gifts campaigns, the University is in the silent phase of a third campaign, and now raises multiple millions each year. (In the past five years alone, the University has received 19 gifts of more than $1 million.)