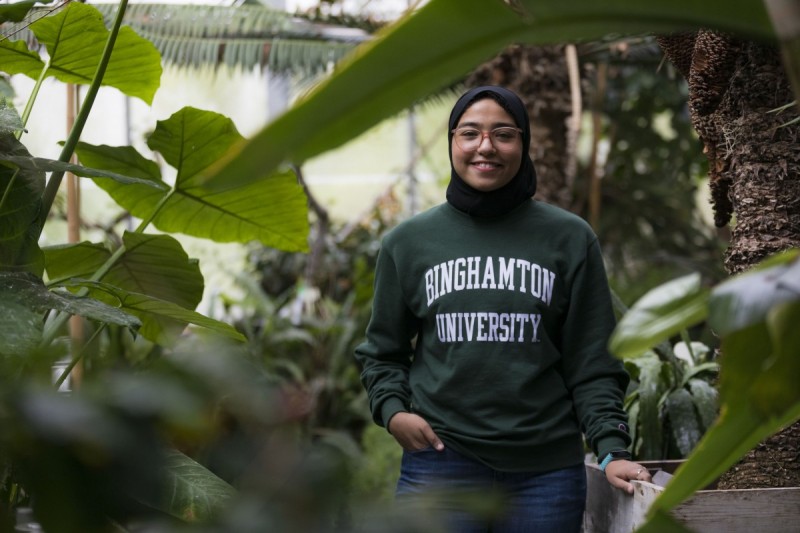 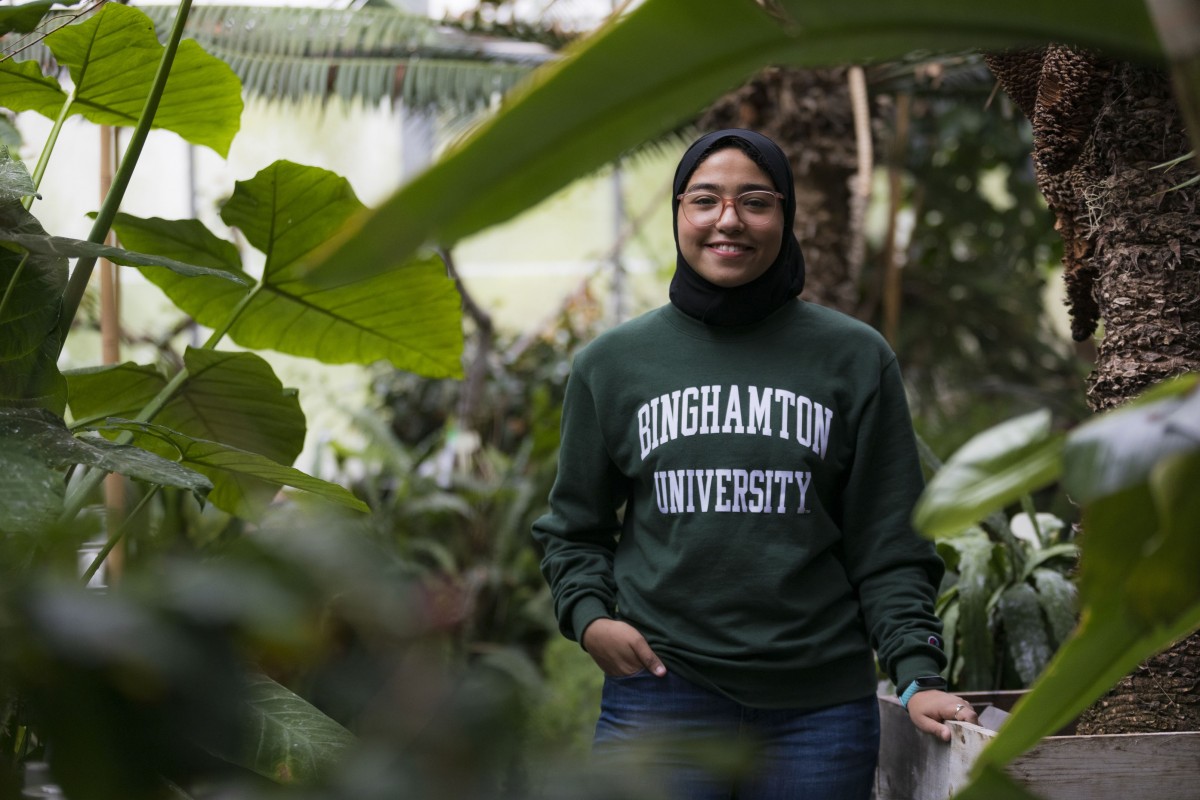 Growing up in Egypt, Hagar Soliman had access to a limited number of TV channels, but Discovery Science was among her favorites. Intrigued by what she saw, Soliman developed a love for science and research.

“What I would do, and I thought it was research, is to Google the terms that I hear on TV,” Soliman said. “And when I did that, the first result that you will get is Wikipedia. So I’d get into Wikipedia, and I got a small notebook. … And I would copy and paste, write down definitions.”

Soliman, a Fulbright scholar and graduate student in biological sciences at Binghamton, has been a researcher ever since. An evolutionary biologist interested in the formation of new and distinct species in Mimulus plants, Soliman studied biotechnology and molecular biology as an undergraduate at Cairo University.

Also known as monkeyflowers because some of its species have flowers resembling a monkey’s face, plants from the genus Mimulus are one of the model organisms used to study evolution.

In trying to answer how different Mimulus plant species are formed, Soliman and her colleagues complete basic plant care such as watering, repotting and fertilizing. Next, they conduct artificial crosses, where they move pollen from one plant to the female parts of another plant. This enables them to explore the reproductive isolation of the two plant species. They also study how much the hybrid seeds produced from those crosses suffer from reduction in fitness compared to their parents. This can help in understanding how separate species are created and maintained over time.

While she’s acclimated now, when Soliman began her master’s program in the fall, her new environment introduced a multitude of obstacles.

“Whenever I thought of my family, I would immediately cry,” she said. “And then I would think, no, I’m not sad. I’m just homesick. But you miss the food, you miss the family. You miss whatever activities you all used to do.”

Soliman eventually found ways to maintain that close connection with her family, making being away from them much easier to manage.

The close relationship Soliman has with her family extends to her education. Due to family influence and cultural norms, she neglected some of the subjects she initially wanted to study.

“In Egypt, astronomy is not a field that will bring you money and food on the table,” Soliman said. “You have to work in the medical field to get money because people care about medicine.”

Considering multiple fields chosen through culture and family influence, even researching evolution was risky for Soliman. Still, during her senior year of college, she took an evolutionary genetics course. At that moment, she knew no other topic piqued her interest like this one.

“I started to see in color, like everything before was black and white. Before, I didn’t pay attention, I just did the work to get my A plus,” Soliman said. “But this is when I began bothering and nagging my professor with constant questions.”

As she grew determined to study evolution, Soliman spoke with her professors and learned of the Fulbright scholars program from a chemistry teacher at her school.

This determination to understand more has also translated into Soliman’s work ethic as a researcher at Binghamton. James Sobel, an associate professor of biological sciences and Soliman’s mentor, described her as unique.

“She is the kind of person who asks questions constantly. She has this drive to know things and a curiosity that is overwhelming,” Sobel said. “That is the only thing I can’t teach a student — or at least I haven’t figured out how to — that intrinsic motivation. It’s one of those things that some students develop, but as a graduate student you either have it or you don’t.”

After completing graduate school in the spring of 2022, Soliman plans to teach at her alma mater. She ultimately wants to continue her research in evolution and obtain a doctorate in the United States.

“Pursue your dreams and do whatever you like even if it’s against the odds,” Soliman said. “Just do the hard work, and everything will come to you.”