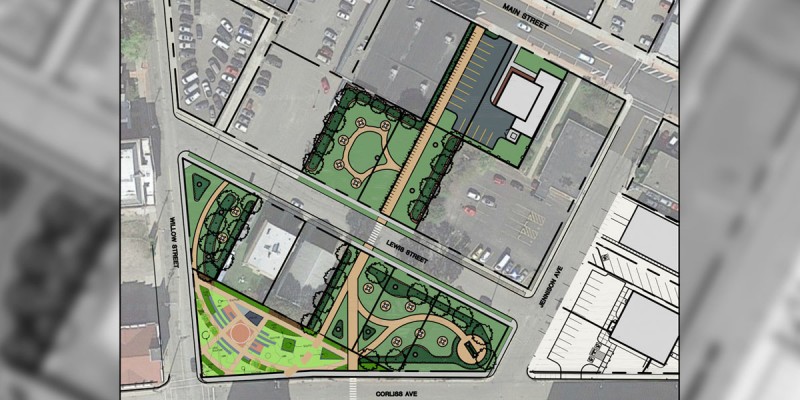 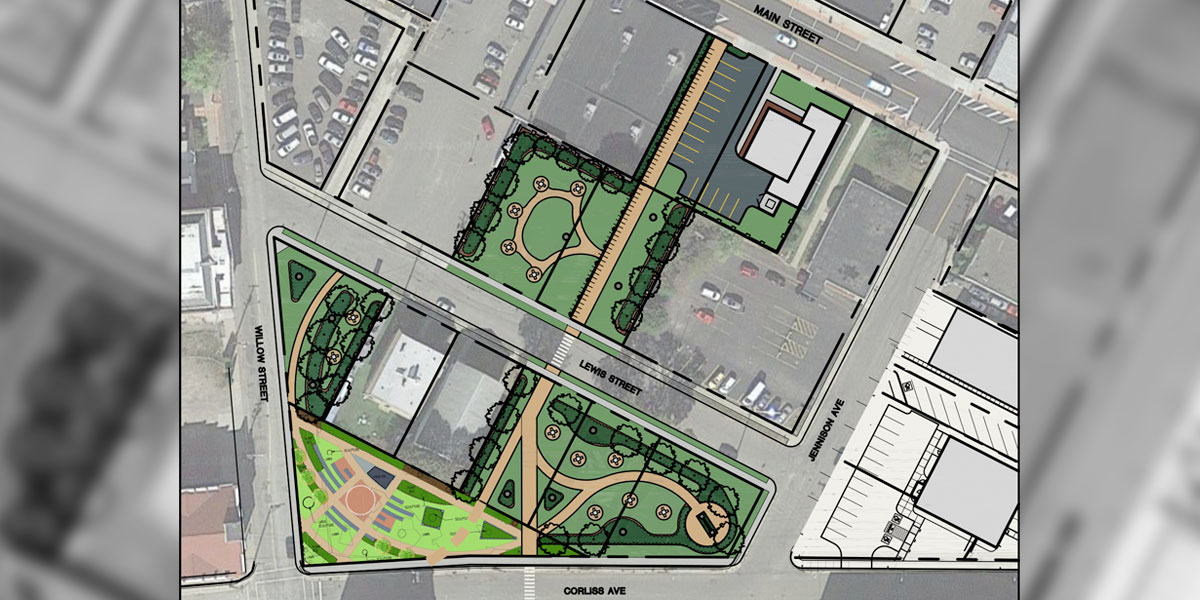 A rendering of the park being developed in Johnson City to connect the Health Sciences Campus with the downtown business district. Image Credit: Nicholas Corcoran.
By Katie Ellis

Development of a park to include sitting areas, lighting, landscaping, walkways and other amenities is underway in Johnson City, N.Y., adding to the changes Binghamton University has brought to a central area of the village through establishment of its Health Sciences Campus.

The two-acre space between Corliss Avenue and Main Street will provide a convenient, attractive and safe connection between the campus and the downtown business district. Funding for the project has been provided by the Binghamton University Foundation.

“Our Health Sciences Campus now includes the Decker College of Nursing and Health Sciences as well as the original School of Pharmacy and Pharmaceutical Sciences building,” University President Harvey Stenger said. “By continuing to work with Broome County and the Village of Johnson City to make improvements, we’re converting blighted space into green space that will help to re-energize the village in ways that our University Downtown Center has done in the city of Binghamton.”

Johnson City Mayor Greg Deemie sees the park as a great addition to the community. “Parks are a great tool for economic development,” he said. “Parks and green space are always a great attraction and will help promote our health and cultural district.”

“The influx of students, faculty and staff will create a boost of life to the area as well as new opportunities for jobs and businesses,” Deemie said. “We have added new housing for low-to-moderate income families and with the removal of the blighted structures and with the addition of the park, the area will have cleaner surroundings. I believe it will better the lives of those in the community.”

One example of new, affordable housing that arose because the University was developing its Health Sciences Campus is the Century Sunrise apartment complex on nearby Baldwin Street that added 105 affordable housing units to the village. Revitalization of these buildings is vital to the core of Johnson City, officials said. The $33 million mixed-purpose complex offers market rate and workforce-focused apartments to individuals and families at multiple income levels and includes 9,000 square-feet of commercial space on its ground floor. It also includes apartments specifically for individuals with intellectual and developmental disabilities.

The University’s aim in Johnson City is to create a safe, inviting space that reinvigorates the area, Stenger said, always with an eye toward doing it correctly.

“As we developed the Johnson City campus, we surveyed students to gauge thoughts on the plan and location. Students expressed great interest in walkable, well-lit areas, which is what this green space project will provide,” he said.

“Overall, we have been studying our efforts closely — and are continuing to do so — including through the Johnson City Revitalization Project spearheaded by Distinguished Service Professor John Frazier of our Geography Department,” Stenger added. “His research team of faculty and graduate students under faculty supervision know what type of data collection is necessary around neighborhood revitalization. This project has been monitoring the neighborhoods around the Health Sciences Campus since before construction began to detect any critical changes to businesses, residents, community services and other stakeholders in this community. “

For the park project, crews began the process of tearing down old buildings in late May. The park is expected to be completed about 14 months.