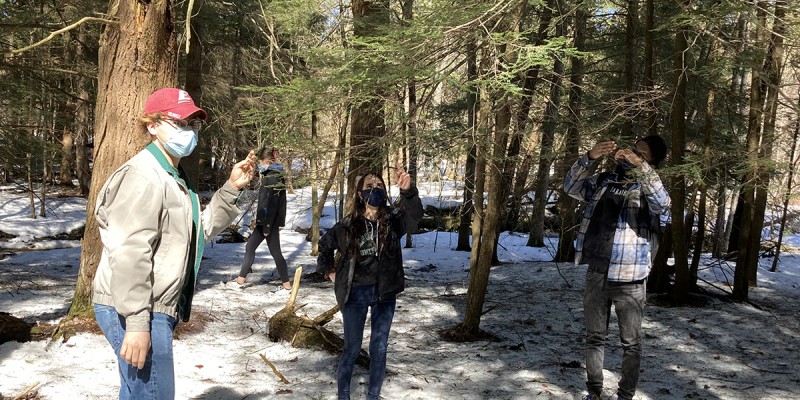 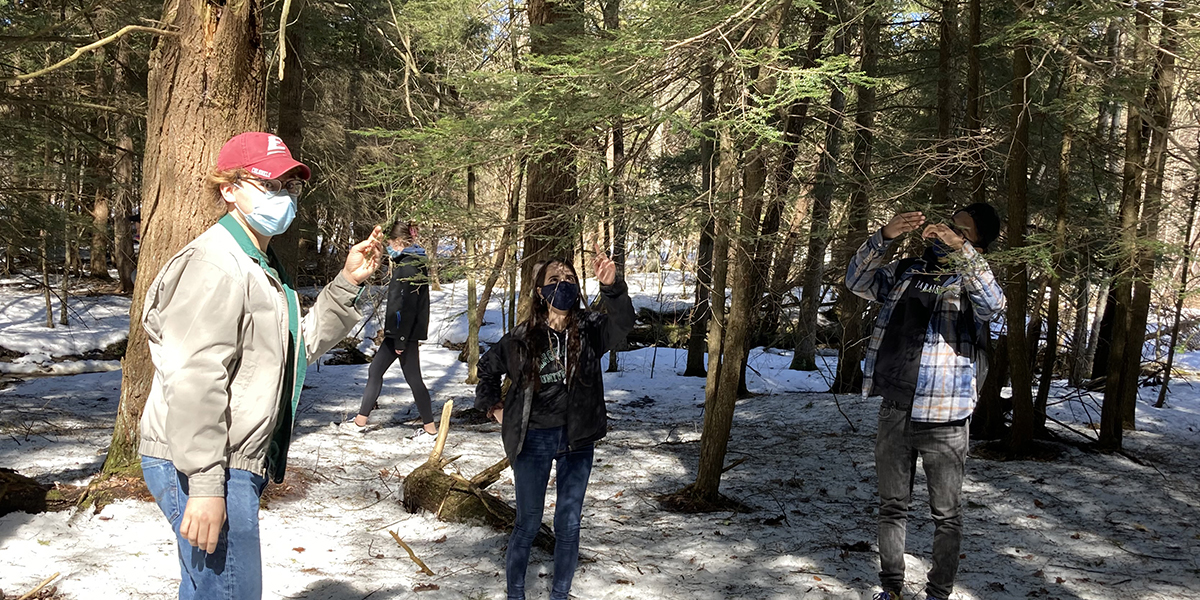 When most people venture out to enjoy the scenery at their local park, they are generally blissfully unaware that invasive species are threatening to kill part of the beautiful scenery around them.

Invasive species are present here in Broome County, and they are threatening to destroy several species of trees in the parks that the community knows and loves.

However, the invasive species have to get through a tough competitor — George Meindl, an instructor in the Environmental Studies Program, and the students in his ENVI 324: Urban Ecology class.

Meindl has a PhD in ecology and evolutionary biology and is passionate about serving the community around him. He is also a part of the Center for Civic Engagement’s Community-engaged Teaching Fellows Program, where he worked with like-minded faculty from disciplines across campus to develop this course.

Meindl believes in the importance of learning outside of the classroom. “I think education becomes a lot more valuable for students when they can see that the knowledge they are gaining can have a direct impact on the livelihood of people in their community,” he said.

Currently, a handful of invasive species are damaging native plants in popular Broome County parks. Among them is the emerald ash borer, an invasive beetle that is killing different species of ash trees. Another invasive insect is the hemlock woolly adelgid, which is impacting eastern hemlock trees.

“People who aren’t biologists or environmentalists often think of endangered species as things you only find far away in the tropics,” Meindl said. “But there are several species of ash trees in North America that are critically endangered because of the invasive emerald ash borer. Over the next couple of decades, we might not have many ash trees left in North America.”

To help combat this possible extinction, Meindl and his students worked with the Broome County Parks Department to help map these invasive species in Nathaniel Cole and Aqua Terra parks.

Meindl’s students spent several hours a week at the parks, walking the grounds looking for evidence of the invasive species. When evidence was found, the students recorded the data in an app, which allowed them to take a picture of the insect and record its exact location.

This mapping project allowed the park staff to document the extent to which these organisms are spreading in the parks, enabling them to better understand how to create effective management plans and brainstorm protocols to combat the problem.

Meindl’s students also developed their own management plans. He challenged them to think of the best, most cost-effective ways to control the invasive species to further help the county.

Meindl hopes that this project will continue in future semesters, but he said the longevity of this collaboration depends on what the county needs and wants. He knows that there is a lot of ground to cover for data collection and a lot of mapping to do. He also knows that his students can really help the county staff with their management plans.

When Meindl was in school studying biology, he felt the only option for him was to be a researcher or to go into higher education and be an academic. He is excited to be able to show his students that there are other professional opportunities for them after graduation.

“The outreach we have been doing with the parks has been a great way of applying the knowledge from all the environmental science and biology classes that I have taken over the years,” said Eric Fung, a senior majoring in environmental science with a focus on ecosystems. “As someone from New York City, it is so interesting to see the issues faced by urban landscapes that are discussed in class and see how they can be remediated.”

Fung is also an intern for the parks department. Through the class and his internship, he has learned of many career opportunities that he wouldn’t otherwise have known were available.

“After networking with some people at the Finger Lakes Institute,” he said, “I was offered a summer position working with them as a watercraft steward dealing with aquatic invasives at Dorchester Park.”

Ultimately, Meindl and his students are working to ensure that the Broome County parks continue to be healthy forest ecosystems.

“The students really appreciate that they’re not just memorizing terms and preparing for exams,” Meindl said. “They are actually contributing to the long-term, greater good of northeastern forests and expanding their opportunities for after college.”