Locked in stone: Research may answer the question of Mars’ missing water 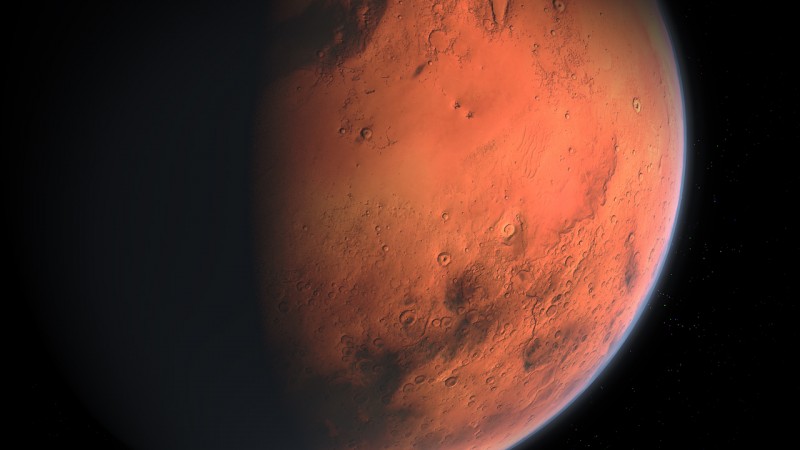 An image of the planet Mars. Image Credit: Pixabay.
By Jennifer Micale

Rivers and streams once flowed across the surface of Mars, etching channels still evident on the planet’s surface today. Water in lakes once lapped ancient shores.

All told, the geological evidence adds up to an ocean’s worth of water, noted Geological Sciences and Environmental Studies Professor David Jenkins. But today, Mars’ red sands appear bone-dry. Where did all that water go?

A research project that Jenkins conducted with Brittany DePasquale, MS ’19, may provide some clues.

Some of that water is trapped in the planet’s polar ice caps, which behave like stone due to Mars’ frigid temperatures. The rest may have gone underground, locked inside clay minerals such as smectite.

Smectite first pricked Jenkins’ interest a decade ago, when he and a prior student were researching an entirely different material; it kept popping up during their experiments.

During the course of his research, he was struck by the mineral’s thermal stability, even though it’s believed to form at low temperatures. Working with DePasquale, he found that magnesium-rich smectite remains stable — meaning that it doesn’t thermally decompose or melt — at temperatures of 800 to 900 degree Celsius, “which is really unheard of,” he said. In iron-rich smectite, the kind prevalent on Mars, it remains stable up to 500 to 600 degrees Celsius, their research discovered.

Jenkins has continued to work on the project, presented the research at a conference and is currently working to get it published in an academic journal.

Mars in a lab

While many geologists head to mountains, valleys and other locations to parse the secrets of the Earth, Jenkins simply pops next door to his laboratory in Science I, a marriage between a chemistry lab and a machine shop. In its confines, he and his students can reproduce conditions that mimic anything from the surface of the Earth to the intense heat and pressure of its mantle — or even more theoretical places, such as the early days of Mars.

Row upon row of silver cylinders in his lab inflict pressure, force and heat to minerals encased in small capsules. Another machine can even create diamonds, although not the jewelry-quality kind. The lab provides, he explained, “an indoor solution to outdoor problems.”

“I cook and I squeeze materials to see how they respond, whether they’re stable or not, whether they change their chemistry or their crystal structure and, if so, how do they do that?” he said.

By cooking and squeezing smectite, Jenkins and DePasquale established a temperature ceiling for its formation, which may offer clues as to how and where the mineral formed on Mars. On Earth, smectite most often results from a reaction between rock and water; however, the conditions for that reaction, such as pressure and temperature, are still highly speculative.

On Mars, smectite may have origins quite early in the planet’s history, when the primordial atmosphere was up to 300 times as dense as our own. The clay mineral could have formed as the planet cooled, Jenkins said.

Although rare, smectite can also precipitate out of standing water. Because of this, Jenkins has also begun research to establish the substance’s lower-temperature stability, which can be challenging because it occurs on a much longer timescale than reactions fueled by intense heat and pressure.

“I figured, let me just put these up and let them sit for a few months at a time to see what happens,” he said.

Water forms approximately 4% of smectite’s weight, making it a hydrous mineral. Other minerals on Earth also have this quality, too, most famously the asbestos mineral serpentine; the water bound up in its fibers is close to 13% of its weight. Heating the asbestos releases that water.

In fact, scientists believe that serpentine minerals may have originally supplied the water for Earth’s oceans via meteorites. In the last stage of the Earth’s formation, it was struck by an object the size of Mars; this impact sheared off material that eventually coalesced into the moon, while turning much of Earth’s surface into a liquid magma ocean. In turn, that heat liberated the water held in hydrous minerals, resulting in the waters flowing across the Earth today.

Jenkins’ current research suggests that the clay mineral could have formed within the top 30 kilometers of the Martian surface — the same thickness as the Earth’s crust.

Unfortunately, there is currently no equipment on Mars that could drill deep enough to confirm that depth. However, the red planet has an underground shortcut of sorts: impact craters, which litter the surface of Mars, particularly in the southern hemisphere. The satellites orbiting the planet also collect remote sensing information that can relate to mineralogy, such as wavelengths of light reflected from the planet’s surface.

So, how much water could you store in the iron-rich smectite on Mars? Jenkins has run the calculations and believes he has an answer.

“It could in fact account for all the missing water,” he said.