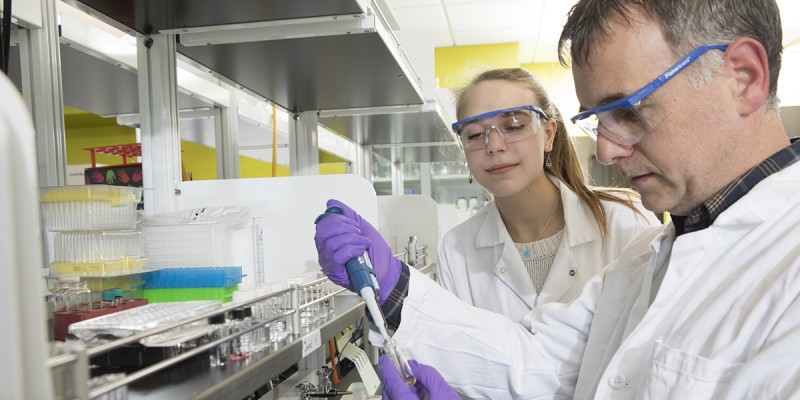 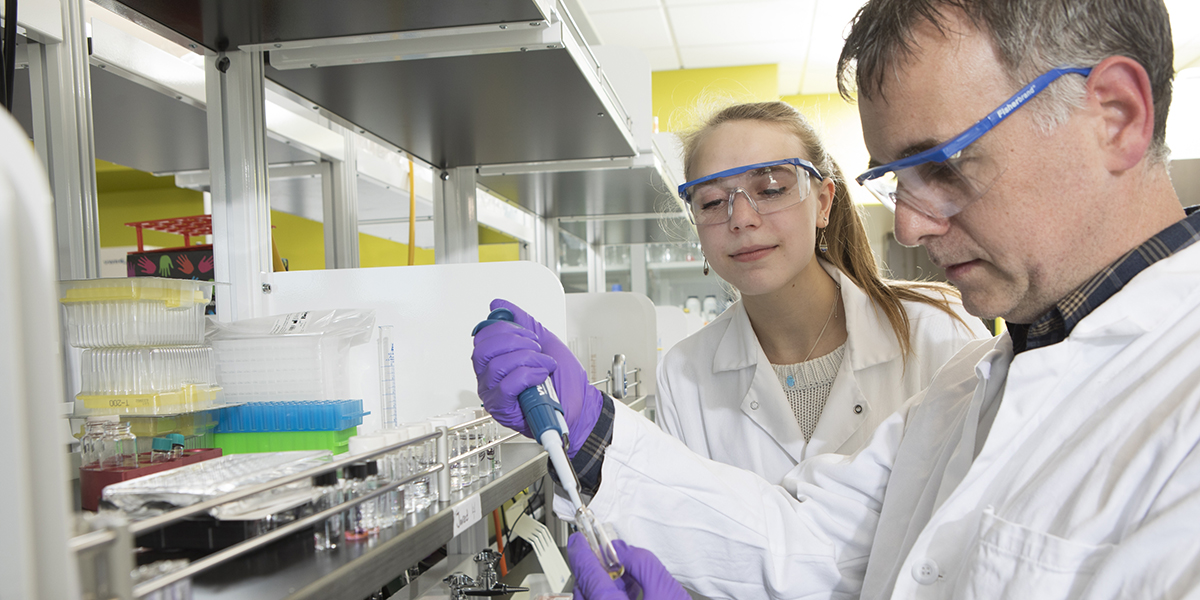 Students such as biochemistry major Brittany Brems will work with L. Nathan Tumey, assistant professor of pharmaceutical sciences, to advance research in drug delivery technology with funding from the National Institutes of Health. (Photo taken when there were no mask mandates.) Image Credit: Jonathan Cohen.
By Katie Ellis

Two National Institutes of Health (NIH) grants totaling over $1.3 million will enable research into antibody-mediated drug delivery technology for the treatment of cancer and autoimmune disorders. L. Nathan Tumey, assistant professor of pharmaceutical sciences, is the Principal Investigator on both grants — $1.2 million from the National Institute of General Medical Sciences and $150,000 from the National Institute of Allergy and Infectious Diseases. Tracy Brooks, associate professor of pharmaceutical sciences, and Fake “Frank” Lu, assistant professor of biomedical engineering, will collaborate with Tumey on the four-year, $1.2 million grant entitled “Exploiting the Hydrophobic Glycosyl Pocket of IgGI for Imaging and Drug Delivery Applications”.

Both grants are focused antibody-drug-conjugate (ADC) technology in which the specificity of an antibody is used to deliver a drug to specific tissue types. “One of major challenges in the development of ADC’s is how and where to attach the drug to the antibody,” Tumey said. “Traditionally, we have randomly attached the drug to various residues on the antibody. However, over the years we’ve figured out that the site of attachment is very important to the safety and efficacy of the ADC.”

Tumey and his collaborators have found a way to attach drugs to a privileged region of the antibody.

“We have discovered a new method for attaching drugs to one very specific residue, Glutamine 295,” he explained.

The advantages it brings are two-fold, Tumey said. “One is that we are attaching at a location on the antibody (a shielded hydrophobic pocket) that naturally protects the drug from metabolic enzymes. The other unique aspect of this technology we’ve invented is that it does not require antibody engineering — thus allowing anyone to attach drugs to their antibody of interest without having to make changes to the antibody backbone.”

The trio is developing a technology, not a drug, Tumey stressed. “We’re trying to show that this technology is useful for delivering drugs. Our hope is to demonstrate that this methodology is equivalent or better than existing conjugation technology — and to eventually use it for the preparation of therapeutic agents.”

Tumey is the sole investigator on the two-year, $150,000 grant, entitled “Molecular whack-a-mole”: Targeting Transmembrane-TNFα for the Delivery of Anti-Inflammatory Drugs.”

“This project is about developing therapeutic ADCs that deliver immunosuppressive payloads using antibodies against a particular protein (TNFα) that is found only on inflamed cells,” he said. “Can we deliver an immune-suppressing agent specifically to the cells expressing this protein in order to calm things down?

“Ultimately, we are designing ADCs that could be employed in the treatment of autoimmune disorders like Rheumatoid Arthritis, Lupus and Crohn’s disease, each of which are driven (at least in part) by over-production of TNFα. By delivering the drug specifically to the TNFα-expressing cells, we hope to be able to ameliorate the inflammation without the side effects that are associated with traditional immunosuppressive agents. ” Tumey said.