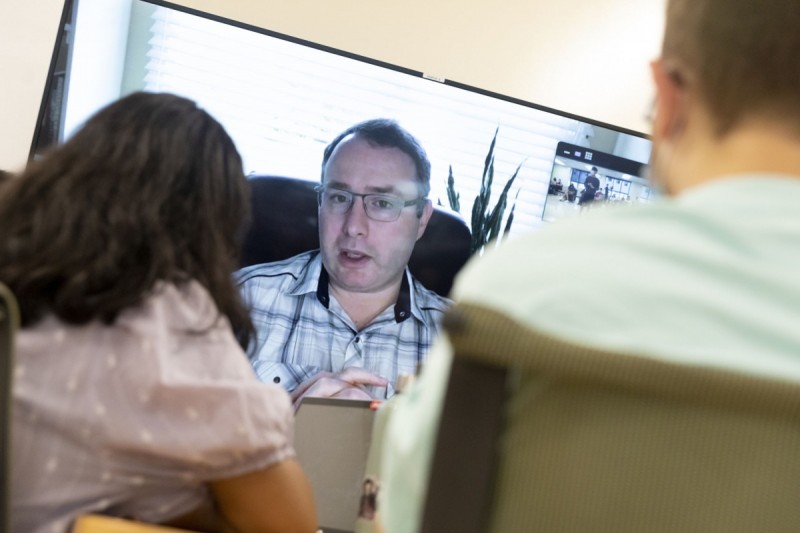 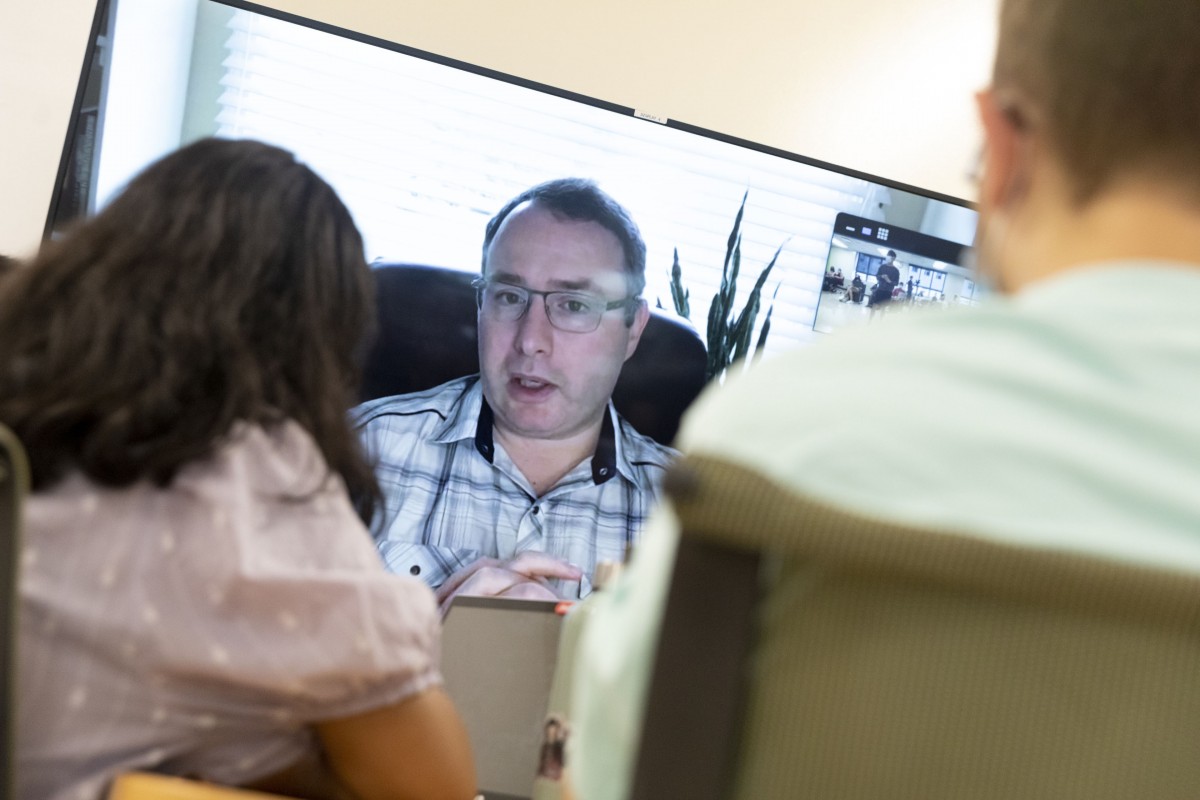 Alumnus Alexander Vindman '98, a retired United States Army lieutenant colonel who was the Director for European Affairs for the United States National Security Council (NSC) until he was reassigned on February 7, 2020 spoke to David Campbell's PAFF 225/PPL 280B Foundations of Civic Engagement class that was held in the Student Wing, September 14, 2021. Image Credit: Jonathan Cohen.
By Jennifer Micale

After hanging up the phone on a July day, Lieutenant Colonel Alexander Vindman walked into his twin brother’s office. He paused dramatically, letting the importance of the moment distill into words.

“Eugene, if what I told you ever becomes public, the president will be impeached,” he said.

That July 2019 phone call between then-U.S. President Donald Trump, his team and Ukrainian President Volodymyr Zelensky did indeed become public — and the subject of an impeachment hearing before Congress that riveted the nation. Central to the trial was the testimony of Vindman, a decorated Army officer who served as the United States National Security Council’s director for European Affairs, a specialist in both Russia and Ukraine.

On Sept. 14, Vindman — a 1998 Harpur College alum who majored in history — spoke to students in Associate Professor David Campbell’s Foundations of Civic Engagement course about the values central to public service and his role in Trump’s impeachment.

“Where you begin doesn’t necessarily indicate where you end,” said Vindman, participating in class from his Virgina home via Zoom.

His identical twin brother, Yevgeny (Eugene) Vindman, also graduated from Binghamton; now an Army Colonel, at the time of the impeachment, he handled ethics issues as an attorney for the National Security Council.

The Vindman family immigrated from the Soviet Union in 1979, when the twins were only 3 years old. The family, which also included an older brother, lived in Brighton Beach’s Little Odessa section and then in Borough Park in New York City. In gratitude for the country that took them in, all three brothers served in the military as a way to give back. Alexander Vindman was commissioned as an infantry officer in 1999 after earning his Binghamton degree.

“At Binghamton I was unfocused, without a clear sense of what I would do. I found passion in public service,” he remembered. “It allowed me to improve myself as an individual.”

He served during the Iraq War and received a Purple Heart in 2004 for the wounds he suffered during the conflict. During his career, he attended Ranger and Airborne school, racked up numerous commendations, mastered several languages and earned a master’s degree in Russian, Eastern European and Central Asian Studies from Harvard University.

In 2008, he became a foreign officer specializing in Eurasia and a decade later assumed the directorship of European Affairs, which landed him in the Trump White House.

“My service and obligation and oath to the country was put at odds with purely partisan activities,” he said of his time there.

A diplomat’s work is often outside the public view and necessarily so; the job relies on trust and relationships that are built away from the public stage.

Months before the famous call between Trump and Zelensky, Vindman joined the U.S. delegation at the Ukrainian president’s inauguration. A junior member of the team, Vindman had a conversation with the newly elected leader, whom he cautioned on two points: Don’t put faith in promises from Russian President Vladimir Putin and don’t become involved in the partisan machinations behind American politics, a move that could potentially erode bipartisan support for Ukraine.

Zelensky was an inexperienced politician and new to government service — but otherwise not unsophisticated. The conversation took place two days before a press conference intended to announce a Ukrainian investigation of former Vice President Joe Biden’s son Hunter, in an effort to influence the upcoming election. The press conference never happened.

As the situation unfolded, Vindman reported the July 25 phone call and even testified before Congress without hesitation, although he knew such actions could cost him and his twin brother their careers. His father — who had once risen to a significant position in the Soviet Union — cautioned him against speaking out. So did his attorneys, and he knew the military may have preferred him to be a reluctant witness, giving only yes or no answers.

His oath required a different path.

“Being a career public servant, I know what my obligations are,” he said. “The officer’s oath is to the nation and the Constitution — that’s the number one obligation — and then to the leadership.”

As the impeachment process took shape, Vindman decided to make simple binary decisions on whether an action was right or wrong, and acted accordingly. Ethics, in essence, functions in the same manner as any skill or ability: If you practice it every day, you can rely on it in moments of crisis without second-guessing yourself. You can simply act, trusting your equipment in the same manner as a paratrooper jumping from an airplane.

“When you do the right thing repeatedly, you build muscle memory,” Vindman explained.

His decision to testify led to the abrupt end of his military career. In February 2020, both he and his brother were abruptly reassigned, escorted from the White House and had their promotions to full colonel delayed.

While he was relatively dismissive of blowback on social media, Alexander Vindman recognized that he had become a polarizing figure and had effectively ended his military career. He resigned that year, and opted then to speak out in more than a dozen articles and a book — a privilege unavailable to him as an active member of the military with restrictions on public speech.

Reinventing himself, Vindman acknowledges that he is in a better position than his father was in 1979, newly arrived in the United States with three-year-old twins, no English, and hauling furniture to make ends meet. These days, he is a published author and pursuing his doctorate in international affairs from Johns Hopkins University.

“Sustained action over time was going to be the way I contributed to U.S. national defense,” he told students. “I was happy to make my contributions behind the scenes, but sometimes life doesn’t work out that way.”

Binghamton students asked Vindman about his experiences, as well as the larger issues behind his choice to testify.

“I was really impressed by the unrelenting courage you had through the trial and the entire process,” said sophomore psychology major Jess Morgan.

Sophomore Ivy Miller, a comparative literature major, wanted to know more about whether the U.S. military is truly non-partisan.

While there is a long history of the military depicted as being apolitical and subject to civilian oversight, the realities are more complicated, Vindman acknowledged. Any large bureaucracy will have politics because people build relationships. Because many enlisted members come from the rural South or Midwest, the military also tends to reflect the conservative side of the political spectrum, although for a variety of reasons, the officer corps tends to be more liberal, he said.

However, the military also has a tradition of inclusivity; for example, the Army integrated in 1947, before the height of the civil rights movement. Military members typically don’t know each other’s political affiliation when they serve and often take pride in their apolitical stance. Restrictions on their speech prohibit them from speaking out on political matters.

As a career civil servant, Vindman considered himself apolitical and didn’t vote in every election, a choice he regrets now. He urged students to value their own participation in the electoral process, including at the local level.

However, he stands by the words he told his fearful father during his impeachment hearing remarks — that unlike the Soviet Union, the truth matters in the United States. But he’s learned some things since then.

“Right does matter here, but we need to make right matter,” he said.

He didn’t mince words in his talk to students, directly speaking out against former Trump’s actions, which he considers unlawful.

“We need to keep the bar high. We should hold our elected leaders accountable and make sure they are held to the highest standards and not the lowest bar,” he said.