An in-person Commencement for the Class of 2020!

More than 450 grads return for a live ceremony. 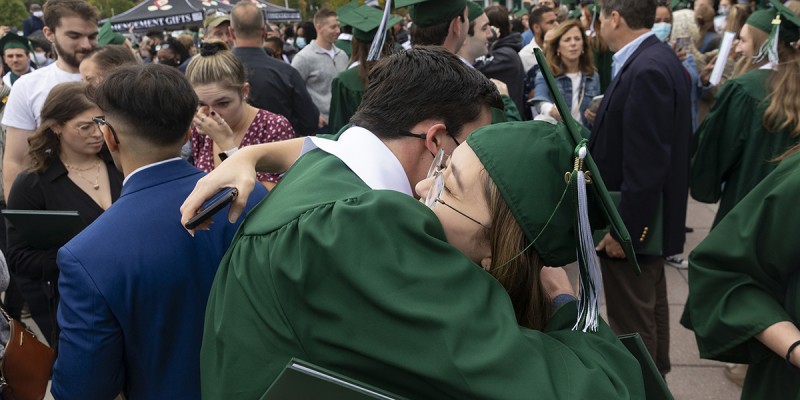 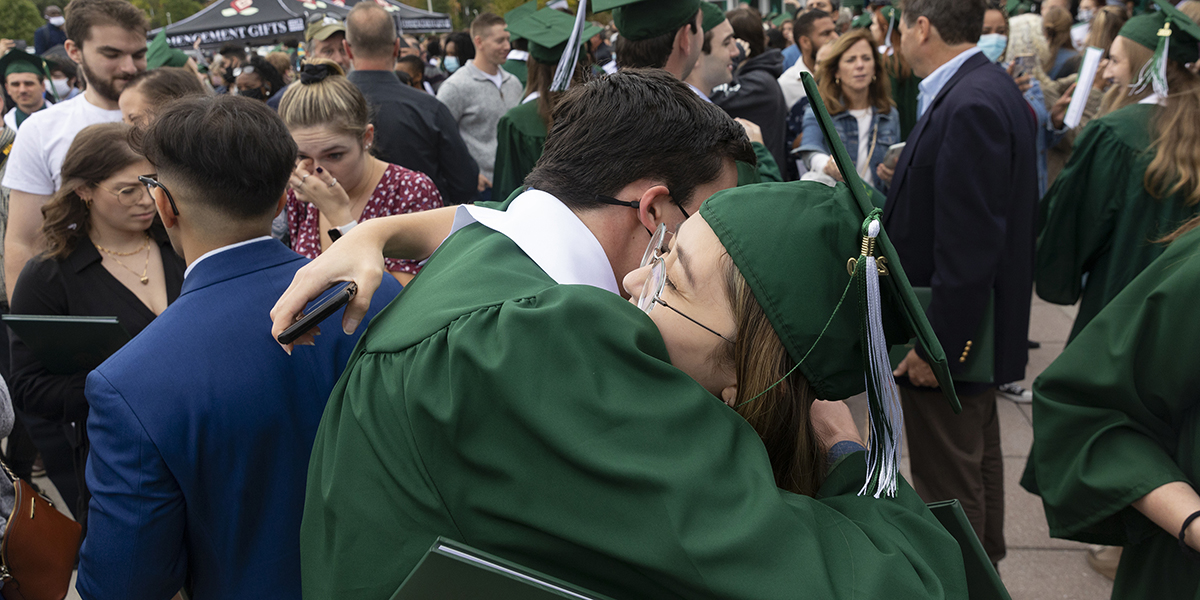 Alumna Brittaney Skavla '20 and more than 450 members of the Class of 2020 returned to campus for their in-person Commencement ceremony, held Oct. 10, 2021, at the Events Center. Image Credit: Jonathan Cohen.
By Katie Ellis

After more than one COVID-related postponement and a virtual ceremony, the Class of 2020 celebrated with an in-person Commencement a year and a half after completing their degrees.

“I know this day has been a long time coming for all of you, and we deeply regret that we had to postpone this well-deserved recognition until now,” President Harvey Stenger told the 450+ bachelor’s, master’s and PhD graduates and their guests. “I’m so happy to welcome all of you back to Binghamton University for this long-awaited celebration.”

Calling it a remarkable time for the a truly remarkable class, Stenger reminded them that when they first came to Binghamton there was no way they could have known that we would be plunged into a world-wide pandemic that “forced you to find new ways to learn, to conduct research and scholarship, and perhaps most importantly, new ways to build and strengthen the social ties that define one’s college years.

“But you were resilient and persevered,” he noted. “This is a great day — when we officially recognize the Class of 2020 — including the first cohort of Master of Public Administration graduates, who, along with our other graduates, reached this milestone during a global pandemic!”

Stenger reminded the graduates of the meaning of their degrees. “Historically, the recipient of the baccalaureate degree is acknowledged to have a level of expertise that will allow you to advance — or commence — in your chosen profession, adding to the quality of life we lead as global citizens,” he said.

“Similarly, a master’s degree signifies a deeper study of a field or discipline — a “mastery” of the subject suitable to teach others. And of course, the PhD. Our doctoral graduates are among that rare cohort that can say they have produced novel and meaningful research that has broadened their discipline.

“Your education at Binghamton was a long and challenging journey filled with the excitement of exploration and discovery, the guidance of faculty mentors and the friendship of colleagues and peers — and, of course, the disappointments and challenges caused by the pandemic,” he added. “But you discovered a passion, one that you have carried with you in the months since you left.

“But what I’ve discovered, and I hope you have, too, is that developing a passion involves hard work —you must deeply engage yourself in a subject, learning its inner workings and investing your time and intelligence,” Stenger said. “I hope that Binghamton has given you the tools to find your passion — one that you will continue to renew and rediscover and in so doing, let Binghamton inform your future years.”

Resilience was also the focus of remarks by U.S. Congressman Hakeem Jeffries ’92, who represents the 8th Congressional District that encompasses much of Brooklyn and sections of Queens, N.Y.. First elected to Congress in 2013, he is currently the chair of the House Democratic Caucus, the fifth-highest ranking Democrat in the House of Representatives. He has focused his efforts on police and housing reform, the environment, voting rights, access to healthcare, social equity and economic justice, and he has helped shape Congress’s response to the COVID pandemic.

Jeffries told the members of the Class of 2020 that they had already proven they were resilient, and why resilience will help them in the future.

“It’s an honor to be back here at Binghamton,” he said. “I first arrived a little over 30 years ago with a few suitcases and a 13-inch television!

“Winston Churchill once observed that success is not final and failure is not fatal,” Jeffries said. “All that matters is the courage to continue. I would put it a different way: A knockdown is different than a knockout — that’s the Hakeen Jeffries remake.

“When life knocks you down. Don’t give up, get up,” he said. “That’s what all of you have demonstrated already.”

He noted his surprise when he learned he was the first Binghamton University graduate to serve in the U.S. House of Representatives.

“Hakeem Jeffries. Who knew? Only in America. What a great country,” he said. “And Binghamton laid the foundation for my journey, where I realized it wasn’t all going to be wine and roses. As for me, there will be many twists and turns, bumps and bruises launching from where you are at right now. I’ve learned over the years that life is filled with ups and downs, highs and lows, peaks and valleys, trials and tribulations.”

He finds himself traveling and on planes and reminded the graduates that, like when flying, they are going to hit some bumps at some point in their future. “You can’t get from your point of departure to your point of destination without, at some point along the way, encountering turbulence.

“When you find yourself in the turbulent moment, some people will doubt your ability to make it though. They are the persistent pessimists, notorious naysayers. In the hood we just call them haters,” he said. “But you’ve already shown yourselves to be resilient, so dismiss the doubters and keep marching toward your dream.”

He cautioned that the road won’t always be easy, and recounted how he ran unsuccessfully for the New York State Legislature twice before the third successful run. “The second loss was a painful one,” he said. “I went back home and my wife and my mom asked how I was doing. I said, ‘I’m okay other than I’m in personal, political and professional ruin right now.’ And my wife (also a Binghamton graduate) said ‘Stop being so dramatic.’

“I had to take a step back. I was a two-time loser, uncertain as to what would come next,” he said. “But what enabled me to get up off the ground to keep marching forward was that I realized, when I look at anyone who has achieved any level of success in any field, at some point they failed and were challenged, but they got up off the ground and didn’t give up and that’s what I want all of you to do.

“I was encouraged in that regard because I looked around and was surprised to learn that some of our most recent presidents of different political persuasions all lost their first congressional races. They were knocked down on the ground,” Jeffries said. “And people likely suggested that they do something different, but they fought for their dream and every single one of them landed at 1600 Pennsylvania Avenue to serve. So don’t give up, get up!”

He also noted that the African Impala has the ability to leap heights up to 10 feet and distances greater than 30 feet, but will remain enclosed in a zoo, kept in place by a brick wall no more than three feet high, because of the unknown on the other side of the wall.

“The impalas can have all the capacity in the world, but because of self-doubt, when a moment of turbulence strikes they remain trapped behind a wall they could jump over,” he said. “So take that leap of faith, because you won’t be disappointed in where you land”

Jeffries’ final observation: “Sometimes in life you will find yourself in the midst of unexpected adversity — like what happened to all of us during the pandemic — forcing you to change everything, but you can either sink or you can swim and I’m so proud of the fact that each of you when you found yourself dealing with unexpected diversity, you crossed the finish line. You graduated from Binghamton University, one of the world’s finest educational institutions. The best is yet to come.”

Gabriel Pinciotti, a theatre major and actor who had been tapped to represent his fellow students at one of the Harpur College of Arts and Sciences ceremonies in 2020, spoke on behalf of all graduates at the ceremony.

Joking that he was a theatre major so what did he know about hard classes, Pinciotti admitted that the tougher challenges for him during his college career were the personal ones, but he learned from them and provided this advice:

1. “First of all, take care of your own well-being,” he said. “Whether it’s your mental health, physical health or anything in between, you should be taking care of the one thing that will stay with you your entire life — yourself. Be your own biggest fan, who better to root for than yourself?

2. “Another thing is doing the things you care about, things that give purpose, meaning — and life — to your life. I implore you,” Pinciotti said. “Never forget to tune into what you really enjoy. Every now and then, just forget the world, forget your work and do what you wanna do. Have some fun!

3. “The last thing, and I’d argue this is the most important one, is other people. Other human beings,” he said. “Not that you can control what they do, but you can control how much you let people in – and I think you should do it often. I’ve found that being with people you care about is one of the best cures for a bad day, even if you’re just sitting and watching TV with them. Cherish your time with everyone, especially those who are close to you.

“It’s a bit of a crazy world out there right now, for a million different reasons,” Pinciotti said. “But when things get tough, when things seem impossible or nothing seems to go your way, just remember: Find the people you love. Do the things you love. And love yourself. That’ll keep you going.”

Watch a video of the Commencement.