Seven-volume set of Birds of America now housed on campus 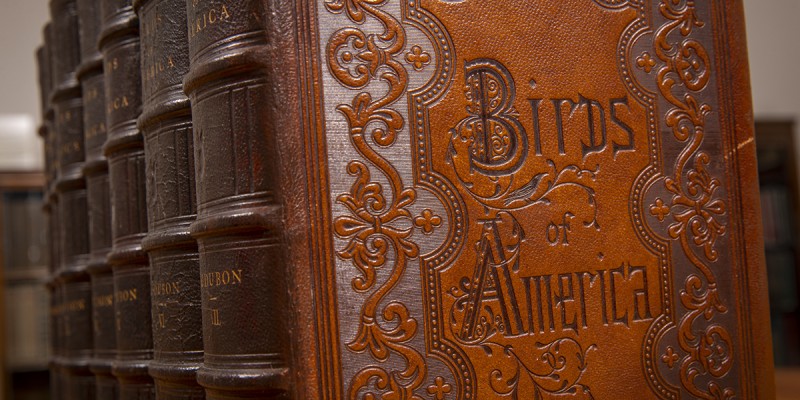 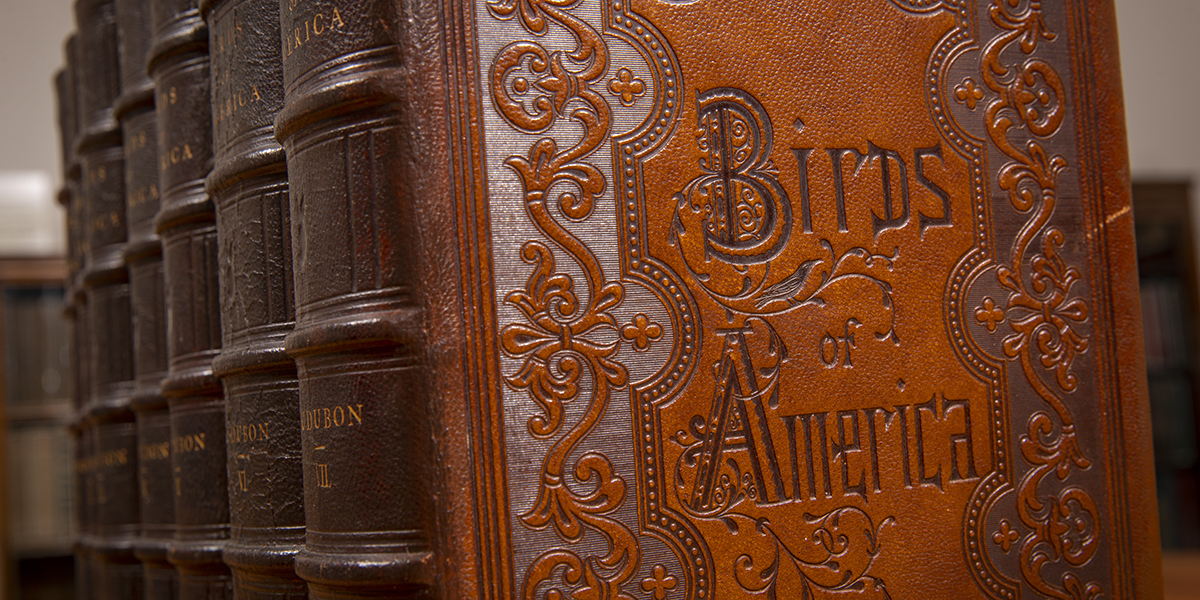 It may come as a surprise to most people, but John James Audubon, renowned ornithologist and naturalist, was at times a bit of a prankster. His monumental work, Birds of America, even includes a handful of birds that never existed!

In July 2021, Binghamton University Libraries’ Special Collections purchased a copy of the seven-volume third octavo edition of Audubon’s Birds of America, published in 1859 in New York City, from a bookseller in Philadelphia.

“I had seen this set for sale on the bookseller’s website, and when the opportunity arose for Binghamton to purchase it, the Libraries were able to make it happen,” said Jeremy Dibbell, Special Collections librarian. “We were able to put together a proposal highlighting not just how interesting the prints are, but also what we can do with the books in teaching and research for a wide range of audiences.”

The collection, in its original, sturdy bindings, includes 500 colored plates — all hand-colored, printed lithographs — as well as Audubon’s detailed background text about each species, including the five that have never existed, such as the Carbonated Swamp Warbler.

“Audubon did the printing and engraving in London and Edinburgh for the large-size original edition, but these were created in New York City, so our collection is an American one,” Dibbell said. “We don’t know how many of this third octavo edition were printed, but only about 15 to 20 copies of this edition exist in libraries today.

“Special Collections is for the entire University and we purchase everything from broadsides to wooden printing blocks and things that will get used in classes in lots of different fields,” Dibbell said. “Like this set, we try to acquire what I like to call Swiss Army books because they have so many uses.”

Audubon’s Birds of America, originally issued in a large “elephant folio” format from 1827 to 1838, is a Herculean work of American ornithology. The smaller octavo editions, like the one now available at Binghamton University, made the work more accessible to a wide audience and featured additional birds that were not included in the original edition as well as several that are now extinct.

“Dibbell went to Union College for his undergraduate degree, where they have a set of the original Audubon folio Birds in their library. “I had a great experience working with those volumes and seeing how useful they are in classes,” he said.

At Binghamton, this major acquisition will be used widely in courses, exhibitions and events on topics ranging from the impact of climate change on bird populations over time, the history of illustration processes, species extinction (two of the birds depicted in the volumes were officially declared extinct just last month) and ornithology-related social justice initiatives that address the push to rename birds that have been named for people with ties to slavery or other injustices.

They are endlessly fascinating,” he added. “The importance of these historical prints and collections are valuable to science. In book form, they equate to the actual physical specimens because you can see how they were viewed at the time the books were printed. It would be interesting to study one bird to see how it has been interpreted over time.”

As an example, Dibbell said the turkey vulture would not have been seen north of Pennsylvania in Audubon’s time, nor would the cardinal have been in this area regularly, but they’re prevalent in our area now.

The volumes will be easily accessible in Special Collections, Dibbell said. “The books will be in a foam cradle for support and all we ask is that everyone wash their hands so they’re clean and dry before using them,” he said. “Also, only pencils are allowed in the reading room where they’ll be viewed. It’s mostly gentle handling we ask. There is no need for gloves.”

And when asked what his favorite print is?

“I really like the Carolina Parakeet, which shows some of Audubon’s really interesting techniques,” Dibbell said. “It has one of the birds scratching its ear. He positions the birds so you can see the maximal number of angles.”

Two events are planned to launch the Birds of America exhibit, “(Re)presenting the Birds of America.” First, an open house will be held from 2:30-3:15 p.m. Friday, Nov. 12, in Special Collections on the second floor of the Glenn G. Bartle Library. The open house will be followed by an interactive talk, “The Science in Scientific Collecting,” with Bartle Professor Anne Clark from the Department of Biological Sciences, from 3:30-5 p.m. Friday, Nov. 12, in the Zurack Center on the first floor of the Library Tower. Light refreshments will be available at the talk.

Register for the Clark talk online.

Posted in: Arts & Culture, In the World, Campus News