Welcomes students and staff for the first time 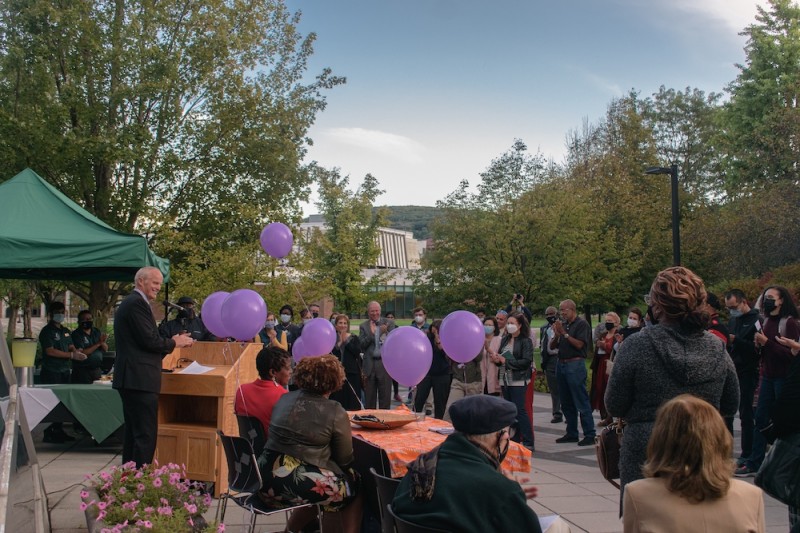 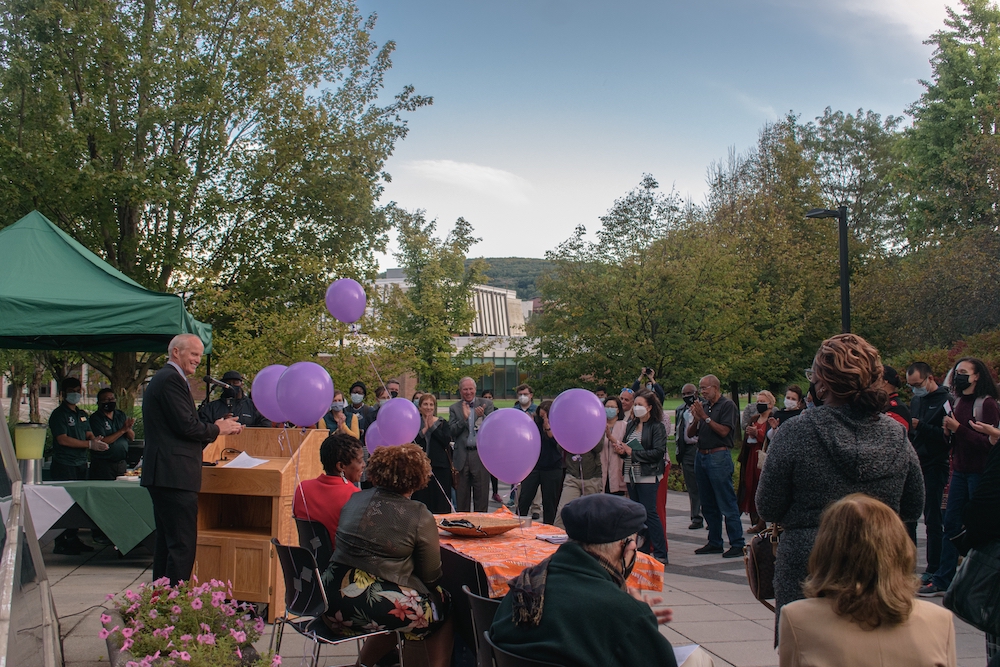 President Harvey Stenger speaks to the crowd at the grand opening of the Harriet Tubman Center for the Study of Freedom and Equity, Sept. 28, 2021. Image Credit: Seth Johnston.
By Isabella Cavallo '21

It was a moment worth celebrating for the Harriet Tubman Center for Freedom and Equity when it officially opened the doors to visitors of the new resource, which aims to enhance diversity; improve education about Black, Indigenous and People of Color (BIPOC); and create an equitable environment at Binghamton University.

“[Harriet Tubman] kept telling those who were following behind her, ‘keep going, keep going,’” center director and Professor of History Anne Bailey said in her remarks. “She kept going with her vision of freedom and racial equity and now that is our vision.”

Members of the Student-Athlete of Color for Success (SACS) were in attendance and SACS President Brittany Korash spoke of the importance of understanding BIPOC students.

“I think it’s honestly helpful to have it here,” Korash said. “When people go in the center they see the history, they see everything. I think it’s important for people to know about it because how much do we actually learn about Black history?”

Bailey said one of the main goals of the center is to improve upon education about racial injustices. The center began by inviting professors Mary Frances Berry, from the University of Pennsylvania, and Hilary Robertson-Hickling from the University of the West Indies, to give a Zoom presentation entitled, “The 3 Rs: The Road to Reparations and Reconciliation,” which discussed racial equity from the past to the present.

This was only a first step in educating the campus on racial injustice, Bailey said. In spring 2021, the center went one step further and established the Truth and Reconciliation Panel (TRC), created to hear the anonymous testimonies from anyone in the Binghamton community during six confidential listening sessions.

The panel used what it learned to develop 10 recommendations for the University that focus around diversifying staff, incorporating BIPOC history and anti-racist education, and clarifying and streamlining responses regarding racist incidents.

“The commission’s recommendations will do much to enhance diversity on our campus and make Binghamton University a place that is truly welcoming and just,” said Binghamton President Harvey Stenger. “This year we celebrate Binghamton University’s 75th anniversary, and I can think of no better way to mark the occasion that to recognize the contributions that the BIPOC community has made to our University, and to commit ourselves to becoming a fairer, more equitable campus.”

The Harriet Tubman Center began working on these recommendations and used the grand opening celebration to share what has been done to this point.

At the top of the list is increasing faculty diversity through cluster hires plus support and mentoring. The center wants to build a faculty at Binghamton that represents the diversity of New York and the country.

There is currently a racial disparity in faculty and staff with even fewer Native American than Black and Latinx. The center hopes to disaggregate the data and recommend a proactive hiring process to assess retirements and actively hire BIPOC replacements.

“If we’re going to bridge disparities, some sacrifice is involved,” Bailey said. “Who are we kidding? There’s just no way you can bridge this type of disparity if some sacrifice is not involved, if there’s not some kind of give-and-take. Let’s make that hard choice because it’s the right choice.”

The center is also working on ways to hold violators of racial incident policies accountable. Racial incidents are occurring all over the country and Bailey expressed one way to combat them on campus is to enact a specific, zero-tolerance policy on racism, which was the next recommendation from the TRC.

“We know that if it’s something that can happen, what are the policies in place to address that as soon as it happens?” Bailey said. “What are the one, two, three, four, five things that we do right away? One, it tells the campus we have zero-tolerance for it and two, it lets the victims of that racist incident feel that they are at home here and have an advocate.”

Bailey feels the University’s clear-cut policy on plagiarism can be used as inspiration for creating a set of procedures professors and students can follow for what is considered a racial incident, how to report one and how to hold violators accountable.

“Every syllabus should have, just like we have a plagiarism policy, our racist incident policy that explains what’s going to happen if someone says or does something inappropriate to anyone else,” Bailey said. “Without that, it’s something that’s left to the discretion of the people involved and it’s really too hard to leave it to the people involved. I say if we can use that, as a template, and use the idea of something that’s common in academia, it sends a great message out there.”

To further help eliminate confusion on where to go, the center will serve as a space for students and others who are looking for support and advocacy.

Another way to combat racism is to enhance the education about BIPOC experiences. The physical space can be a place where students and professors can learn to understand their peers and build a more just and welcoming environment.

“Everyone’s different, everyone has a different background, so I feel like understanding students of color here and understanding where they come from would be the biggest thing,” Korash said.

The TRC’s third recommendation: to include a course on BIPOC or an anti-racism General Education Requirement, which would be a change to the Pluralism requirement.

The requirement would include a list of courses that specifically deal with BIPOC culture, history, experiences and contributions. Each student would be required to take one course, regardless of their school or major. The center is currently discussing and working with leaders in Harpur, Watson and Decker colleges, as well as the School of Management, to develop a proposal for this Gen Ed requirement.

“We’ve had conversations with some of our stakeholders across campus about how these recommendations have been aligned with things going on in their schools, their colleges or departments, and how they plan to use our information and our recommendations to push change forward,” said Sharon Bryant, the director of diversity, equity and inclusion for Decker College and the associate director of the Harriet Tubman Center.

It is a recurring theme for students to take additional courses after taking just one class on Africana studies or BIPOC history and culture, Bryant said. Sometimes, this leads to an additional major or minor for interested students.

“They just realize how lacking their education has been,” Bryant explained. “But when they would try to get their friends to take some of these same classes, people were either not interested or could not fit one into their schedule.”

The one-class requirement could be a stepping-stone to learning more about BIPOC experiences that students would not otherwise have. This can prepare students to be better professionals, whether that’s in the medical field, business world or in a law office. Education on this can help students understand and improve the disparities in health.

The TRC presented its recommendations to President Harvey Stenger who tasked the Strategic Priorities 3 team and Karen Jones, the vice president for diversity, equity and inclusion, to take the lead in implementing the plans and ideas the center developed from the recommendations.

The center will now play a supportive advocacy role while President Stenger appoints people to work on the ideas and get the ball rolling. Bailey expressed that although she is the director of the center and a professor, she does not have the authority to make these decisions. Instead, Stenger and the center will work with Jones, the deans and other faculty to implement these plans.

“This is not just a top-down thing, which is why we’ve been involved,” Bailey said. “Racial equity doesn’t happen through just one office and one president. That’s necessary, but if everybody else is kind of lukewarm about it, it will not happen.”

On a more symbolic level, the center hopes to mount a statue of Harriet Tubman

in front of the office in honor of her work towards equity and justice. They also plan to create an herbal garden one day as Tubman utilized medicinal plants and foraging during her time.

To learn more about the center’s resources and mission, check out the Harriet Tubman Center’s webpage or visit the office in Academic Building B.

Overall, the Harriet Tubman Center has much more planned for the future. Nia Joyner, a fifth year and the Vice President of SACS, is hoping the center is able to accomplish their goals for Binghamton University.

“It’s a step in the right direction,” Joyner said. “I’m just hoping it leads to more and doesn’t stop here. It should keep going up.”