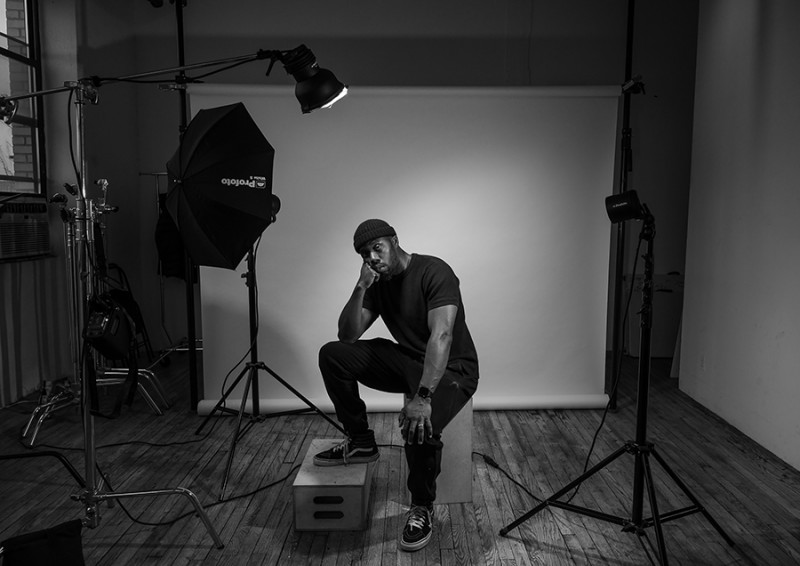 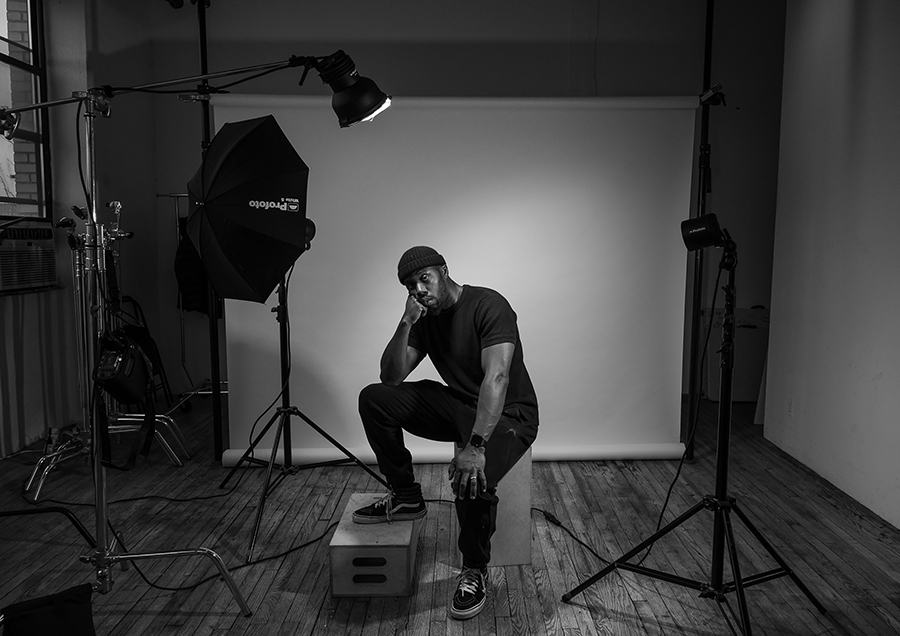 When Idris Solomon ’02 launched the “Black Shutter Podcast,” he thought he was prepared.

The problem? He began the podcast in January 2020. After recording two episodes from his Brooklyn-based photography studio, COVID hit.

But Solomon didn’t fold. Instead, he adapted, as he has throughout his career. “I’m a creative problem-solver. I’m not going to say no podcast because of this. People record remotely all the time,” he says.

The podcast has since taken off, and become part of an impressive portfolio of work that includes creating everything from award-winning photography to directing advertising campaigns to building entire virtual reality worlds.

His own photography focuses on stories in the Black community, and he centers his work on “seeing a gap and filling a gap instead of being angry that these things don’t exist. I was angry for a long time, but I channeled that energy into creating something that can help and inspire other people,” he says.

As a student, Solomon transferred to Binghamton University from New York City College of Technology, and ran track for two years for Binghamton. He was the conference champion in the 200 meters in 1999 at the New England Collegiate Conference Indoor Championship.

He got into graphic design via computer science, which was his original choice of major. He took an elective class with Evangelos “Van” Dousmanis, a long-time Binghamton University photographer, and learned about Photoshop, which was then still a nascent technology.

“He took me under his wing, and I took his class three times even though I wasn’t getting any credit the second and third time,” Solomon says of Dousmanis. “He didn’t really give us assignments. We’d go off and come back with all types of wild designs.”

Solomon was soon staying in on weekends, immersed in his work. “Nobody really understood why I would choose to stay in my room and on my computer, but I was discovering what I wanted to do as a career,” he says. He even ended up creating his own major: art studio.

He tried graduate school, and when that didn’t work out, he started a post-production company, doing motion graphics and film editing. That led him to NET TV, a Brooklyn-based Catholic television station (he designed the logo), and then advertising. While in-house with the multinational advertising and public relations company Havas, he worked on major brand ad campaigns, including those for Lysol, Johnny Walker and Hershey. Then in 2016, he was awarded a Fulbright Fellowship to photograph hip-hop culture in Ghana.

This all led Solomon to HBO, where he’s been an art director for three years, in his preferred freelance capacity. He’s worked on the social media and digital campaigns for the series Lovecraft Country, which was nominated for 18 Emmy Awards in 2021. Part of that work involved creating a virtual reality experience where users, via Oculus headsets, could experience a curated virtual Lovecraft world (which his team also used for meeting space while working out the kinks in the programing).

For the show High Maintenance, which is about a weed-delivery salesman, Solomon created an adult activity book, much like kids can get at a diner, but cannabis-themed. It came with crayons and a vase that could also be used as a bong. He also created Instagram imagery for the final season of the popular Game of Thrones series, which was tricky because he had no idea what he’d be working with.

“I had to anticipate what was happening next, and I had to plan ahead without knowing which photos I’d have access to,” he says.

The idea for the “Black Shutter Podcast” came from photography courses he took at the International Center for Photography in New York in 2015. He was the only Black student in his cohort.

“I didn’t learn about any new Black photographers and in 2015, that’s problematic and needed to change,” he says. “People need to see themselves reflected in the things they’re trying to do.”

The goal of the podcast is to “highlight Black and Brown photographers, giving them space to share their stories and experiences — good, bad, ugly and everywhere in between.”

The podcast name comes from “the way Black photographers see the world,” he says. “When we have our camera, we bring a lived experience into any situation we’re photographing, whether we’re conscious of it or not.”

After recording those first two episodes of the podcast in his studio, he’s been doing the show remotely out of necessity, but that also allowed him to expand who he could interview. Over more than 40 episodes, he’s talked to photographers on the West Coast of the U.S., in Canada and France. Future episodes will feature photographers based in Africa.

So far, he’s had in-depth conversations with visual journalist Tara Pixley about injustice and drawing attention to who is behind the camera; filmmaker Thomas Allen Harris about the power and importance of the Black photo album; and with Adger Cowans, the first Black photographer inducted into the cinematographers union, about his long career.

Solomon wants other photographers to see themselves as who they are: artists, and that this can be a career.

“In all the interviews I’ve done, I’ve had nobody say that they knew right away that they can do this, or this is something I can make a living off of,” he says.

“Black Shutter Podcast” is still the name of the show, but it now falls under the umbrella of Black Shutter Productions, which he founded with his friend Leslie Ogoe. The two met working in the advertising world. So far they’ve done ad campaigns for academic and commercial clients.

“I’m leaning more away from doing the design work and going more into directing,” Solomon says. He recently joined the International Cinematographers Guild Local 600, which means that he can go onto TV and movie sets to take photographs for production stills.

Solomon also wants to create an archive of Black storytelling, specifically around photography.

“I imagine in the future somebody discovers this podcast and this big treasure trove of information opens up to them, and they’re like: holy s**t, here are all these stories of amazing Black photographers, some of them known, some of them not,” he says. “But everybody’s story is important. I approach the interviews as a way of letting photographers tell their own origin story.”