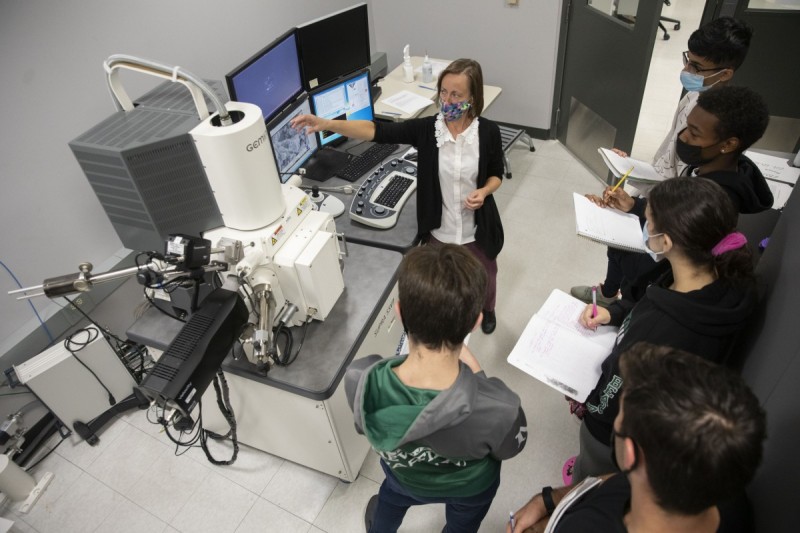 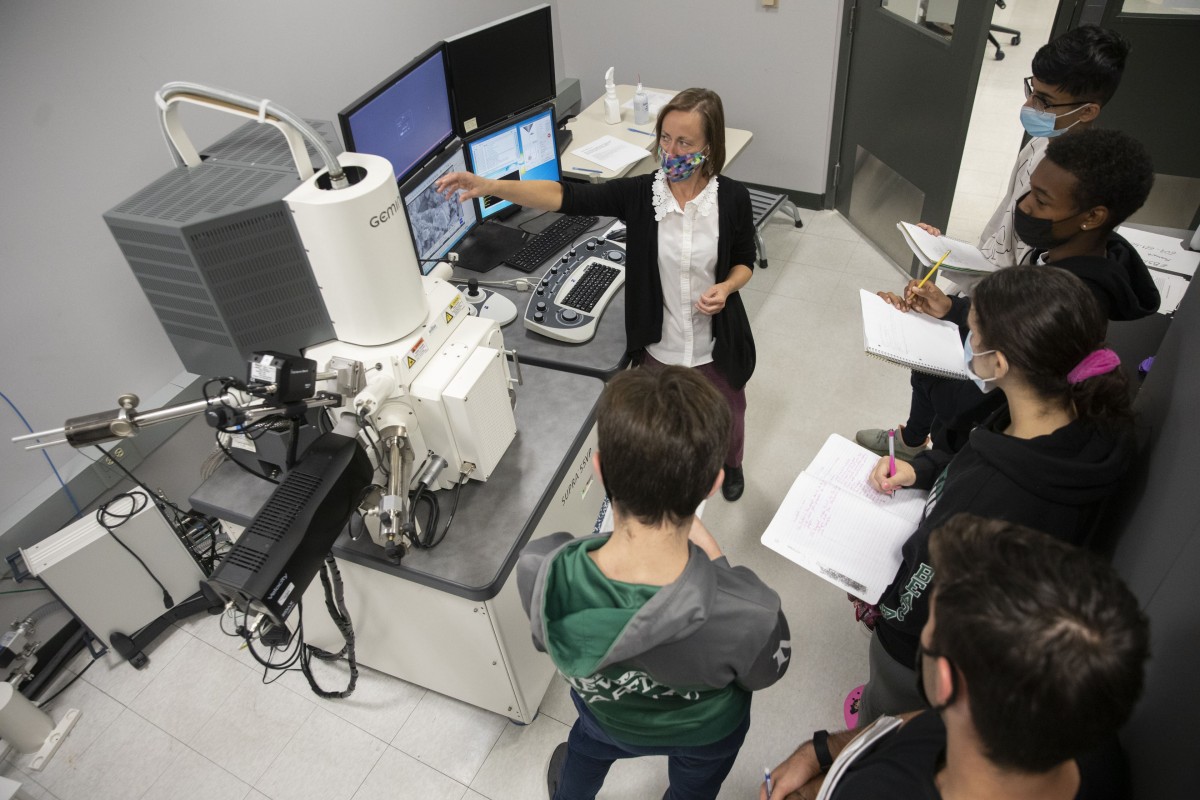 To the naked eye, the reddish-orange powder appeared to be cinnabar, a pigment once used to provide vivid color in Mayan burial chambers, Chinese lacquerware and Roman paintings.

But the HArd X-ray Photoelectron Spectroscopy system (HAXPES) could see what the human eye could not. Bombarded by X-rays, the powder lacked the mercury that is characteristic of this toxic pigment.

The cinnabar was fake.

The high-tech piece of equipment — the first of its kind in North America — offered a different verdict on the deep-blue pigment once called caeruleum Aegyptium in ancient Rome. Calcium and copper all showed up in the proper proportion on the high-tech scan, revealing that this pigment was indeed the legendary “Egyptian blue.”

Now in its fifth year, Materials Matter combines the humanities and sciences for a comprehensive look at the substances behind art, particularly pigments, ceramics and glass. Interdisciplinary from the outset, the number of different fields involved in the program continues to grow, from archaeology, art history, history of science and graphic design to chemistry, physics and geological sciences.

Assistant Professor of Classics Hilary Becker, in the Department of Middle Eastern and Ancient Mediterranean Studies, is the course’s current instructor of record; an archaeologist, her research focuses on the economy of pigments during the Roman era. Chemist Lynn Schmitt, who plays a major role in the course, also has a background in medieval studies.

“A lot of us are people who are in more than one lane and understand how using more than one discipline allows us to ask different questions,” Becker said.

The class also features multiple guest speakers, including an art conservator, a glassblower, a ceramicist and a manufacturer of acrylic paint. Students also have the opportunity to apply their knowledge in hands-on labs; activities include making paints, creating a Roman-style fresco and heat-testing pottery.

Along the way, they not only consider an object’s physical properties, but also the cultural history of the object.

In planning the course, the two instructors of record — Associate Professor and Chair of Art History Pamela Smart and Becker — have worked to maintain a symmetry between the humanities and sciences. Because they come from the humanities side themselves, they draw on expertise from a wide range of colleagues, currently 16 in total, from museums, higher education and industry. The instructors’ challenge is to provide the narrative that runs through the course, tying ideas and concepts together for students, Smart said.

On the humanities side, science can be critical to understanding the workings of history and the circulation of certain goods, for example. On the other side of the equation, the course encourages STEM students to consider the social and historical contingencies that lie beneath the production and application of knowledge. Innovation doesn’t arise along a simple trajectory; rather, accidents of history can spark new knowledge, or lead to the loss of a previously mastered skill, Smart explained.

“Our fundamental issue is that it’s not productive to think about science and humanities as occupying entirely separate spheres. It’s a relatively recent idea that they don’t belong together,” Smart said. “We want to make the argument that they enrich each other.”

The seed of Materials Matter was planted in the Material and Visual Worlds Transdisciplinary Area of Excellence (TAE). Members shared a common interest in adapting the TAE’s approach to a curricular initiative, which in turn would open up new research avenues, collaborations and a way to test ideas in the classroom, explained Director of External Scholarships and the Undergraduate Research Center Valerie Imbruce.

She and Smart co-direct the National Endowment for the Humanities grant that funds the initiative; Imbruce also conducts the course’s educational assessment.

“We want students to see that the world is not segmented into areas of study in the way that the academy is,” Imbruce explained. “We want them to integrate humanistic and scientific ways of seeing the world, and to appreciate and understand each approach. We hope that this interdisciplinary approach to understanding materials — the focus of the class — will open up questions for them about other topics they study and encourage them to blend their interests, push through boundaries and think creatively.”

This is currently the final year for the NEH grant, which received a year extension due to the pandemic. While Imbruce and Smart would like the course to continue in its current form, they also hope to anchor it in a minor built around interdisciplinary collaboration and communication. To that end, they have joined Humanistic STEM (H-STEM), a project between multiple universities that aims to create a transferable model that blends the sciences and humanities, Imbruce said.

This year, Materials Matter partnered with an initiative to open up the Analytical and Diagnostics Laboratory (ADL), part of the S3IP Center of Excellence, to a wider range of classes and programs. For the class, ADL research scientist Jenny Amey and postdoctoral physics researcher Matt Wahila demonstrated the use of the facility’s scanning electron microscope and the HAXPES for an up-close look of the elements that comprise pigments.

A detector on the scanning electron microscope captures X-rays, and can map the location of specific elements within the pigments, Amey said. Users can also see how much of a specific element is contained within a pigment, such as copper or calcium. As a result, two pigments that may appear to be an identical shade of blue to the naked eye are thus revealed to be quite different in origin: one synthetically created, and the other from a rock. Such differentiation is highly useful in determining the origin and authenticity of pieces of art, Becker explained.

“Let’s say a painting has something like titanium dioxide, which is a pigment that’s not used in paints until the 1920s,” Becker said. “If you find it on a material that’s from much earlier on, you’ll have a lot of questions: Is this material authentic? Has the object been restored after the 1920s?”

The HAXPES also allows scientists to learn about the elemental makeup and proportions within the tested material, Wahila explained. However, they can also obtain additional data about the bonding and interaction of those elements: the specific compounds of copper within it, for example. In turn, this data can lead to other insights, such as what color a pigment should be based on its atomic structure.

Acquired by the University in 2019, the HAXPES is the third of its kind in the world and the first outside Europe. Prior to its invention, only a particle accelerator could perform similar tasks; the HAXPES, however, uses a reservoir of liquid gallium to generate the X-rays, allowing small labs access to this type of analysis for the first time, Wahila said.

The class draws students from every discipline and from all levels of their undergraduate journey. They gain insights into different aspects of their discipline they may not have otherwise considered: A chemistry major, for example, might learn how chemical processes are used to formulate a new paint or to alter the color of glass.

According to student feedback, the class really does spark interest across disciplinary lines, with humanities students developing a deeper appreciation for science and vice versa. Students say they appreciate the passion, knowledge and commitment of the instructors, and the science and fresco labs received particularly high marks during assessment.

First-year student Ashley Dua didn’t enjoy science classes in high school, and was intrigued by the possibility of combining arts and sciences while meeting her general education lab requirements. It turned out to be her favorite class this semester.

“I always feel like I’m learning two sides of everything. I’m not only learning how something is made, but also why it was made, how it improved over time and the science behind the materials,” said Dua, who is considering majors in philosophy, politics and law, and political science. “And you don’t really know what you’re going to get each day because there are different people teaching from different specialties, such as a scientist or an archaeologist.”

She particularly enjoyed the pigment unit and its culminating activity: making paint using crushed flowers and other additives. Dua created a turquoise-hued paint, and tested it on wood, plastic and other materials.

A dual major in biological science and classical civilizations, senior Liam McGuirk has enthusiastically discussed the course during his interviews for medical school. The course and his classics major spark his interviewers’ interest — more so than even his scientific research and the conferences at which he’s presented.

He took the course last year, and is currently a teaching assistant helping his peers master the material. As a TA, he encourages fellow students to ask questions about what they’re learning: Why would a potter choose this type of clay, and shape it in this way?

“I think undergraduate education in general is more about learning how to ask questions than finding answers. This class does that really well,” McGuirk said. “It teaches you how to ask better questions that don’t just address what you understand, but questions that other disciplines might ask, even if you don’t know how to answer them.”

He has some advice for students considering the course: “Don’t be afraid to step outside of your comfort zone because you will have to step outside of your comfort zone a little bit. The learning that you experience will enrich not only what you know, but it’ll help you find out more about what you don’t know. That’s the whole point of college, right?”