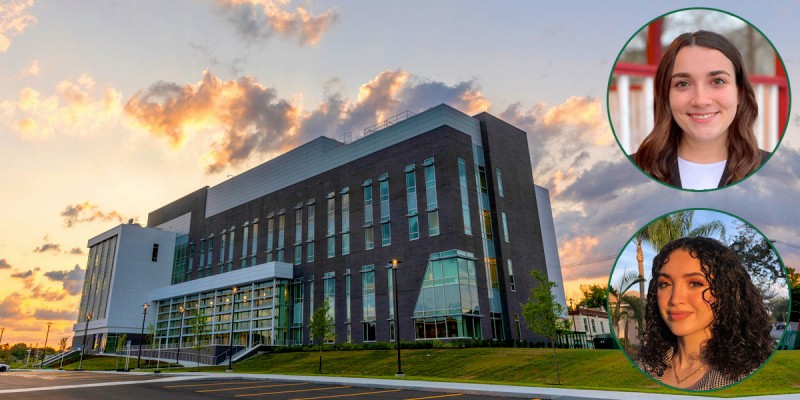 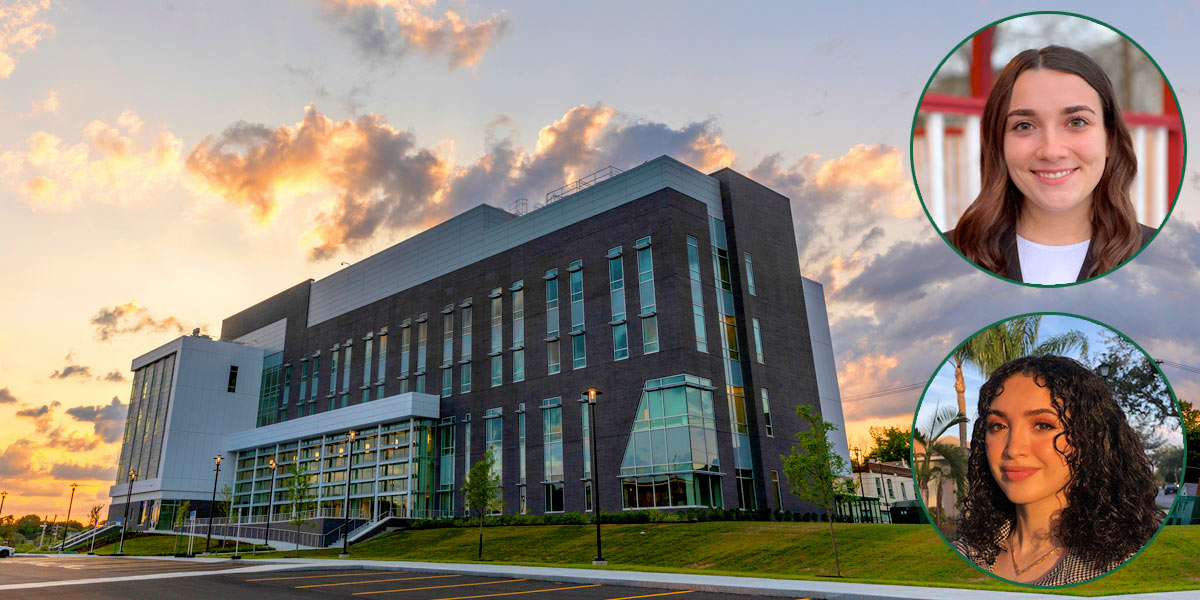 Jumana Khatib will work for Genmab in Princeton, N.J., rotating through different departments, and Julia Napoli will work for Merck & Co. in Upper Gwynedd, Pa., outside of Philadelphia, in global medical information. Genmab specializes in antibody therapeutics for the treatment of cancer and Merck focuses on scientific innovation to deliver medicines and vaccines.

Khatib, who recently completed a rotation on transplants (heart, kidney, liver) at Milton S. Hershey Medical Center – Penn State Health, will undertake a unique, multidisciplinary fellowship that will allow her to spend six months each in medical affairs, regulatory affairs and clinical development, followed by the last six months of her fellowship in the area of her choosing. “They are giving me the freedom to try different things to see what I like,” she said. “No other company has a fellowship like this one and it is truly one of a kind.

“I like that I’ll have the opportunity to dip my toes in different fields so I will have a better idea of what I’m good at or enjoy,” Khatib added. “It’s important to know what the other functional groups entail and see where the gaps are.”

The Yonkers native holds a bachelor’s degree in biology from St. Thomas Aquinas, and is the oldest of five, with two younger sisters currently attending Binghamton University, one in Watson College and the other in the School of Management. Their father came to the United States at the age of 15, never having finished high school, but his entrepreneurial skills have served him well. Though unable to complete his education, higher education is important to him. “He always tells me, ‘If I went to college, who knows what I could have been,’ which is why he so greatly encourages my education,” Khatib said.

The fellowship she will begin wasn’t easy to attain. “Round one was 30-minute interviews,” she said, all via Zoom. If you made it past the first round, the second round would take place about a week later.

The second round included a large group of people on a panel, asking questions for 45 minutes, followed by a one-minute break, then another 45-minute round with another panel,” Khatib said. “Then, I had another one-minute break before the third Zoom when I gave a PowerPoint presentation on a journal article about the drug they created and answered questions about it.”

Following that, Khatib had a 30-minute interview with the program director. “I felt completely drained,” she said. “It was hard to connect with myself again. But they told me I was in their top four and the vice president wanted to talk to me the next day and I knew I had to push forward.”

The meeting with the vice president came down to one question: “I have to select two. Why should you be one of them?”

“I gave my genuine response,” Khatib said. “They called me that night and gave me the offer.”

She also buddied up with a student from D’Youville she had met during a PSSNY (Pharmacists Society of the State of New York) conference. “We both had fellowships on our mind, so it was nice to have someone to go through the process with.”

If she had any advice for other students planning to apply for a fellowship, it would be this:

“It’s important to connect with people on LinkedIn and valuable for an overall perspective on different companies,” she said. “Don’t be afraid to ask for a 20-minute interview with people you connect with and ask them to tell you about their position in their company. Everyone in the pharmacy world is acquainted with one another and it is always important to put your best foot forward and make as many connections as possible. The interview process can be daunting, but be sure to prioritize being true to yourself.”

A Staten Island Native, Napoli followed her older brother to Binghamton and spent her first two years at the University as an undergraduate. “All my life my mom and grandpa had a joke about me becoming a pharmacist, and I never really thought much of it,” she said. “However, when it came time to decide my career path, it became clear to me that becoming a pharmacist was less of a joke and more of a reality. I liked the clinical aspect of pharmacy, but what really sold me was the pharmacy school at Binghamton popping up before my eyes. I had already taken the prerequisites and so I applied early acceptance thinking, ‘I want to stay at Binghamton.’”

Napoli’s favorite rotation was a pharmaceutical industry one, but they are hard to arrange without industry connections. “Being part of a brand-new pharmacy school made it tough to find an industry rotation because we have no alumni that work in the industry, and our faculty are largely on the more clinical side, having done residencies,” she said. “It was super difficult, but I knew that I needed a rotation in the industry to gain valuable experiences that I could speak about in fellowship interviews. I wanted to make sure that I was marketable enough as a candidate.”

But the power of LinkedIn changed her world.

“I reached out to a lot of random people on LinkedIn,” she said, eventually finding a preceptor at a pharmaceutical agency. “Although this was not a pharmaceutical company, it was one that works directly with pharmaceutical companies on their drug launches and things like that,” she said. “This rotation provided me with valuable experiences and helped me to ultimately decide that medical information was the functional area I wanted to apply to. I got the chance to work with a lot of industry professionals, and hearing their perspectives was crucial to my professional development.”

That experience served her well during her forty interviews across 16 companies in the fellowship application process, she said. “I applied to various companies through two fellowship programs, Rutgers and University of the Sciences. Merck is under the Rutgers umbrella.”

“This application and interview process definitely wasn’t easy,” she said. “I think the hardest part for me was the quickness of the process and feeling like I couldn’t come up for air,” she said. “For companies affiliated with Rutgers, the interview process was over the course of about four weeks. Once you finished your first-round interviews, they would let you know within a few days if you received a second-round interview. These occurred either later that same week or the following week.”

During that final week, Napoli was offered a fellowship through the University of the Sciences and also one through Rutgers. “These positions are so hard to come by and I felt so grateful to have gotten these two offers. I knew that Merck was a perfect fit for me, based off of interactions with the team and the overall vibe that I felt.

“As soon as I got the call from Rutgers extending an offer for the Merck Global Medical Information Fellowship position I knew that all of my hard work had paid off,” she said. “They told me that I could have two days to respond, but I didn’t even need two minutes. I knew that this was my perfect fit.”

“My mantra throughout this process was, ‘It takes a village,’ and I certainty would not have been able to achieve this without my village of amazing professors and mentors,” she said. She credits two great professors who helped her every step of the way: Clinical Assistant Professor of Pharmacy Practice Kelsey Hennig and Assistant Professor of Pharmacy Practice Willie Eggleston.

Her advice for students wishing to pursue a fellowship:

“Involvement,” Napoli said. “I was a leader in various organizations during pharmacy school and was able to speak a lot about working in teams because of that. In industry, you need to demonstrate that you’re a leader and articulate how it has impacted you. Leadership positions shape you and help you understand a team dynamic better. When I look back, I am so thankful that I had the drive to be incredibly involved because it really changed me as a candidate.”

And the best part was the application and interview process: “The people that I met. I made sure to connect with my interviewers on LinkedIn after my interviews and hope to stay in touch with them as my career progresses,” Napoli said. “The huge network I was able to build in such a short time was crazy.”