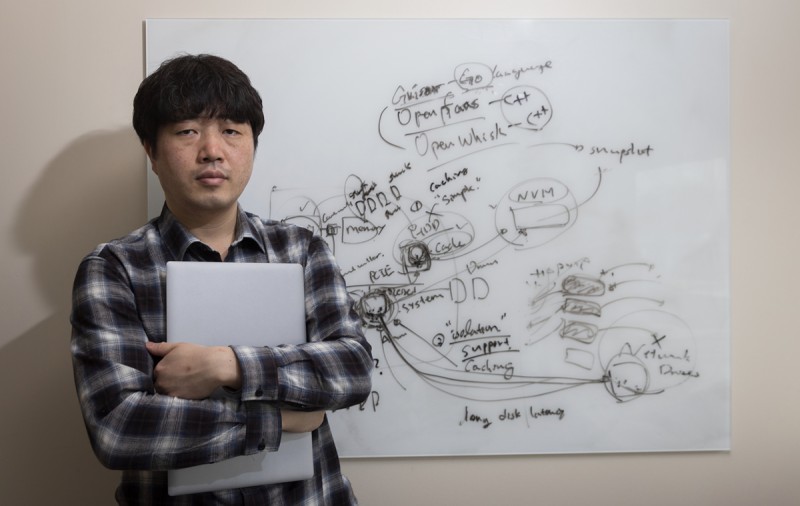 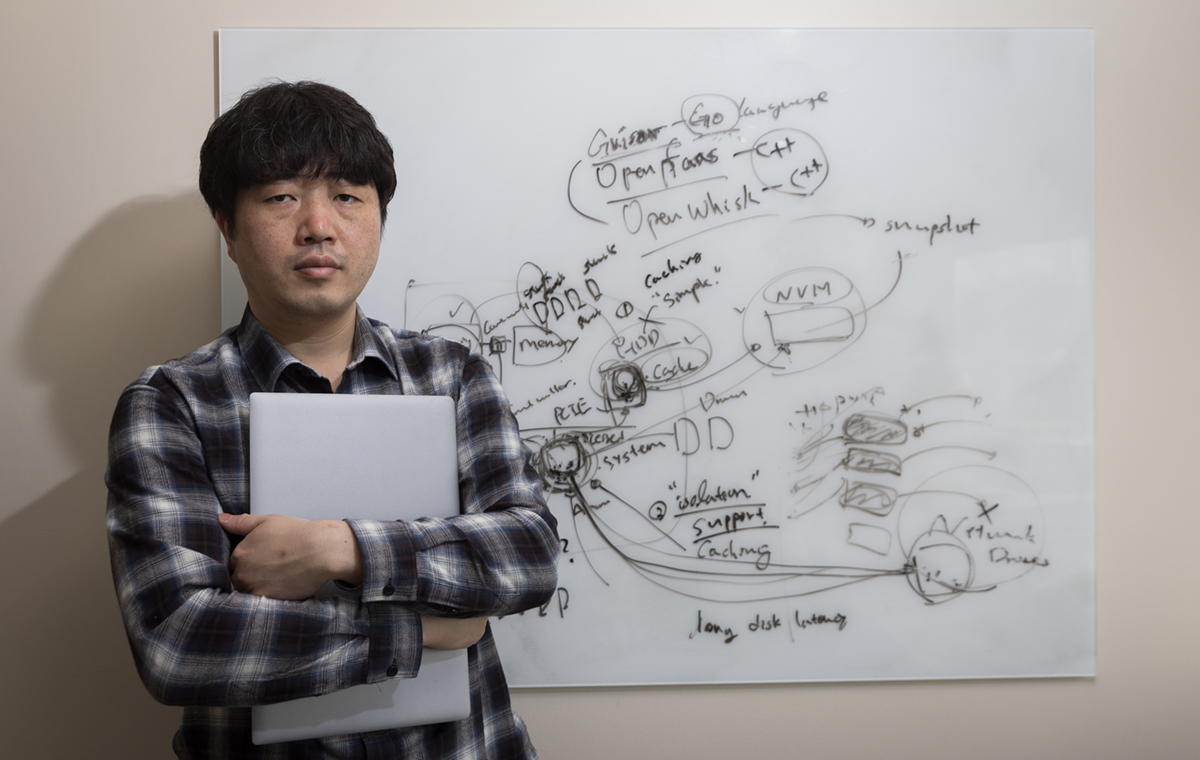 Assistant Professor Seunghee Shin thinks he can greatly improve the communication time between smart devices and the cloud, and he has received a $500,000 CAREER Award from the National Science Foundation to fund his research. Image Credit: Jonathan Cohen.
By Chris Kocher

Cloud computing is what allows us to carry the world around in our pockets. By using the internet to put data storage, networking and software on servers elsewhere, smartphones can routinely perform dozens of functions that developers only dreamed about a decade ago.

The tradeoff, however, is that it takes time for information retrieval and processing to happen between our phones and the virtual space. Even a few extra seconds can be the difference between happiness and dissatisfaction with an app or other task.

Assistant Professor Seunghee Shin thinks he can greatly improve the communication time between smart devices and the cloud.

As a faculty member in the Department of Computer Science at Binghamton University’s Thomas J. Watson College of Engineering and Applied Science, Shin recently received a five-year, $500,000 National Science Foundation CAREER Award. A CAREER grant supports early-career faculty who have the potential to serve as academic role models in research and education.

Shin’s idea is to shorten the distance between our devices and the information they need by creating a series of memory caches along the route, which would make cloud-based programs run faster. The innovations rely on technology such as SmartNICs and non-volatile memory.

A network interface card, or NIC, is a hardware component that connects a computer to a network, almost always using Ethernet. The latest SmartNICs include advanced processing and memory capabilities that improve the user experience. Non-volatile memory (NVM) can retain stored information in memory chips even after the power is removed. It is often used for secondary or long-term storage not accessible to a device’s central processing unit.

Shin believes that both SmartNICs and NVM can be leveraged for improved cloud computing.

“The cloud server is so far away over the network Ethernet — you have to go there and grab the data and bring it back,” Shin said. “However, we have a much, much stronger NIC now, which can do a lot more in your local machine. The response time will be shorter.”

If Shin’s research bears fruit, it could change the way that hardware and software are designed, complementing each other to satisfy the high software demands.

“Traditionally, you purchase a machine in the cloud system, you implement your server there and then you offer the cloud service,” he said. “The companies in this cloud system are renting their machines for a certain period, and they pay monthly whether they use the machines or not. This is more like a pay-as-you-go model.”

The NSF CAREER grant will fund equipment purchases as well as a PhD student to help Shin complete the research, which will require multiple levels of testing to prove successful.

“We’ve never used the SmartNIC this way — I just decided to test one to see what would happen. So everything is a challenge,” he said. “The important thing is what data we have to store and how to increase the hit ratio for the disk cache, which measures how efficiently the data organization is.”

Shin, who joined the Binghamton faculty in 2018, is grateful for the support he has received.

“As a junior faculty member, the University and Watson College have helped me get a great start to my research career,” he said. “I also feel the pressure, too, like I need to meet their expectations.”