Building better together: Partnerships with GiGi’s Playhouse empower students and individuals with disabilities 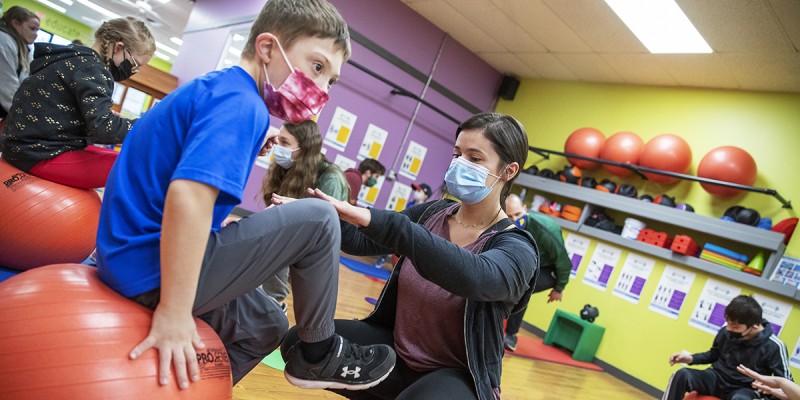 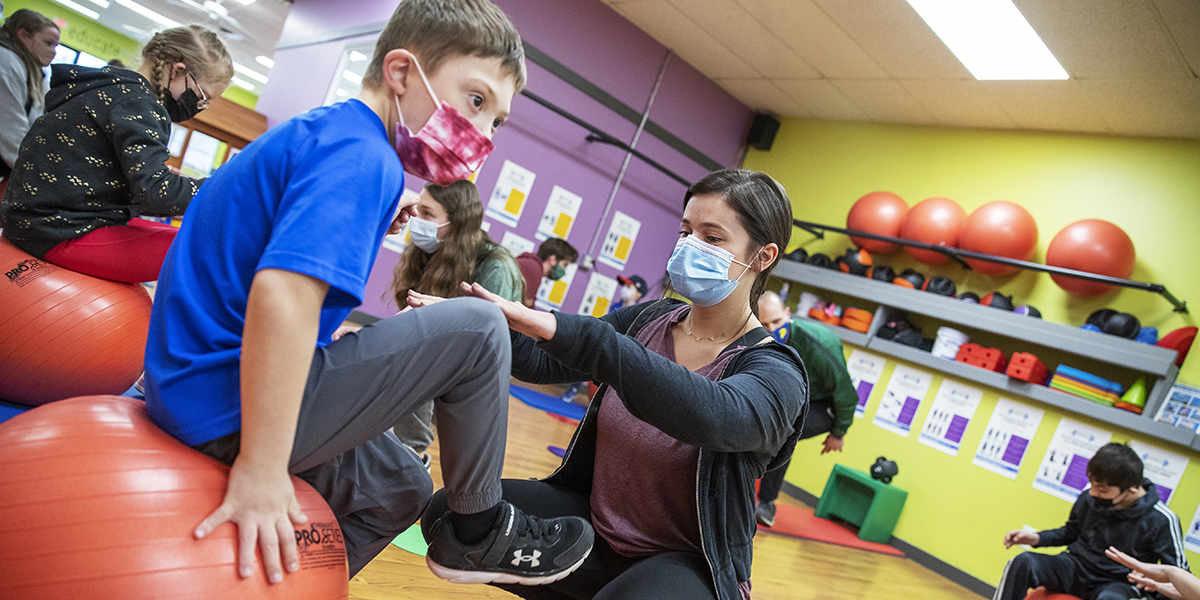 Anna Pearlman, a senior majoring in mathematical sciences and minoring in Spanish and education, does exercises with a young boy who has Down Syndrome at GiGi's Playhouse, helping him to strengthen his muscles. Image Credit: Casey Staff.
By Laura Reindl

When Anna Bruce’s son Camden was diagnosed with Down Syndrome at a young age, the self-proclaimed “planner by nature” started thinking about how to ensure he would receive the ongoing support and acceptance necessary for him to thrive and find ways to “plug in” in the community throughout his life.

Bruce began speaking with other local families of individuals with Down Syndrome and found that her concerns about her son’s future were shared by others in the community — and not unfounded.

Individuals with Down Syndrome generally receive guaranteed support and therapy until they reach the age of 21. After that, however, families often find themselves on their own. So Bruce started researching alternative support systems and came across GiGi’s Playhouse, a network of 55 Down Syndrome Achievement Centers located throughout the United States and Mexico that offer free therapeutic, educational and career development programs for individuals from birth through adulthood.

“When I started researching different options,” Bruce said, “GiGi’s was the one that most intrigued me because it had an educational component, and it spoke to my Type A personality of having high expectations — it’s not just a time filler.”

Bruce now serves as the board vice president and program coordinator at GiGi’s Playhouse of the Southern Tier, which opened at its Vestal Parkway location in 2019.

“We’re working on building skills for independence … to really help each and every one of our [participants] find those best fits in the community where they can be a contributing member,” she said.

From the beginning planning stages, Bruce and her colleagues knew two things: they would rely heavily on the community for support, and they wanted to integrate that support in a way that would reinforce GiGi’s mission of promoting acceptance and changing the way the world views individuals with Down Syndrome.

“The University has been a huge part of GiGi’s. Even before we opened, that was our vision,” said Bruce. “We saw the benefits of a mutual relationship with the University because we knew it would be helpful for us — being an almost entirely volunteer-run organization, we would need a steady flow of willing and eager volunteers — and we knew it was great for the students, too, because they’re looking for opportunities to learn in real-life situations.”

Bruce estimates that over 50% of the volunteers at GiGi’s Playhouse come from the University. The playhouse has only one paid employee; everyone else who walks through the door — including Bruce — is a volunteer. From therapies focusing on motor skills and physical fitness, to one-on-one math and literacy tutoring, to cooking and sign language classes, all of their programs are run by volunteers.

Affiliations with the University span a broad spectrum. During the 2020–21 academic year, the School of Management’s PricewaterhouseCoopers (PwC) Scholars raised money to convert a back room into a fully functioning kitchen, created a job-skills development program and held numerous virtual events to engage with participants. During the spring semester, GiGi’s also received a $7,500 grant through the University Philanthropy Incubator, as part of the undergraduate Philanthropy and Civil Society course taught by Associate Professor of Public Administration David Campbell.

A recently realized partnership with the University’s new Speech and Language Pathology (SLP) program has been especially exciting for Bruce. Providing this kind of therapy had been a priority for her from the beginning, but she knew it would require volunteers with a specific area of expertise.

“This past fall we were able to offer free speech and language skills coaching for our participants from age three through adults,” said Bruce. “Our participants stop receiving those services at 21. To be able to provide that again is really remarkable.”

The joint project — led by Rodney Gabel, professor and founding director of SLP — was made possible by a $10,000 grant through the Stephen David Ross University and Community Projects Fund.

GiGi’s also recruits many individual student volunteers through internships, the education minor program and faculty teaching community-engaged learning courses. Anna Pearlman, a senior majoring in mathematical sciences and minoring in Spanish and education, is currently volunteering at GiGi’s for a third consecutive semester.

Pearlman, who plans to be a math teacher, started working with GiGi’s through the education minor program in spring 2021. Due to the pandemic, she worked virtually with a student in South Dakota on math skills, using a variety of sensory techniques to accommodate the student’s learning style. Working directly with individuals with disabilities has been extremely valuable in her own learning, as well.

“It’s a totally different perspective actually having hands-on experience with these individuals than it would be just hearing in the classroom how you’re supposed to do it,” she said.

In the fall of 2021, Pearlman took SPED 411 Intro to Special Ed with Candace Mulcahy, an associate professor in the Department of Teaching, Learning and Educational Leadership. This community-engaged learning course, which Mulcahy developed through the Center for Civic Engagement’s Community Engaged Teaching Fellows Program, is designed to give students hands-on learning experiences with one of two partner organizations — the Ross Park Zoo and GiGi’s Playhouse. Pearlman was thrilled to be able to continue her work at GiGi’s, but decided to diversify her experience and try volunteering with a new program, GiGi’s Fit Kids.

“Individuals with Down Syndrome often have hypotonia,” she said, “which is low muscle tone, so a lot of the exercises that we do are to strengthen the participants’ muscles.” These sessions can be a little chaotic, with music blasting and the occasional flying object to dodge, but they’re also a lot of fun. Pearlman’s favorite memory from her time at GiGi’s is when a young participant came running up to her and begged her to be his partner.

“That was so special,” she said, “and it just reminded me what a rewarding experience volunteering at GiGi’s Playhouse is and how much I cherish my time here.”

Pearlman currently serves as the head of the GiGi’s Playhouse subcommittee on the Education Minor Steering Committee, which allows her to recruit new volunteers and further strengthen the partnership between Binghamton University and the playhouse. And she still goes to volunteer on a regular basis.

“I think my favorite part about GiGi’s Playhouse, and the reason I keep coming back,” she said, “is really because of the sense of community that I feel here. Everyone is so accepting and welcoming, and they really do all they can to create the most inclusive environment possible — something that’s really special and important to me.”

According to Bruce, Pearlman isn’t the only student whose connections at GiGi’s have kept her coming back.

“I get to have all of these conversations with the students that come in and talk about how their lives are changed,” she said, “and they may not even say, ‘This is impacting my life,’ but they come back — that’s what’s incredible. So I know that it’s making an impact on them, and they’re getting just as much from the experience as they are giving to us.”

Watch this video to learn more about the University’s partnerships with GiGi’s Playhouse.