Kanneboyina Nagaraju will begin his duties May 12 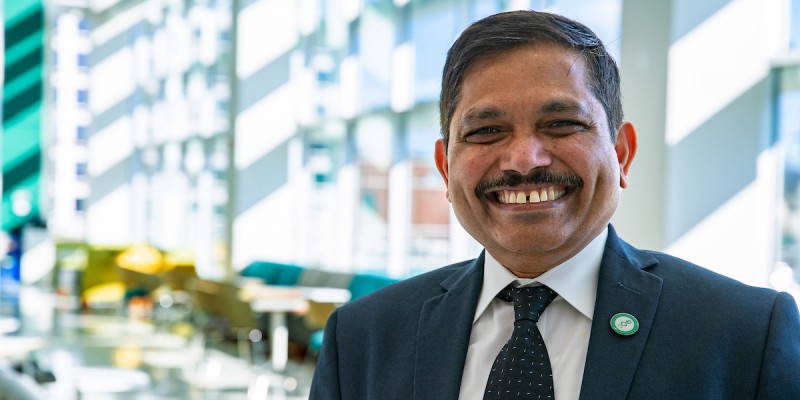 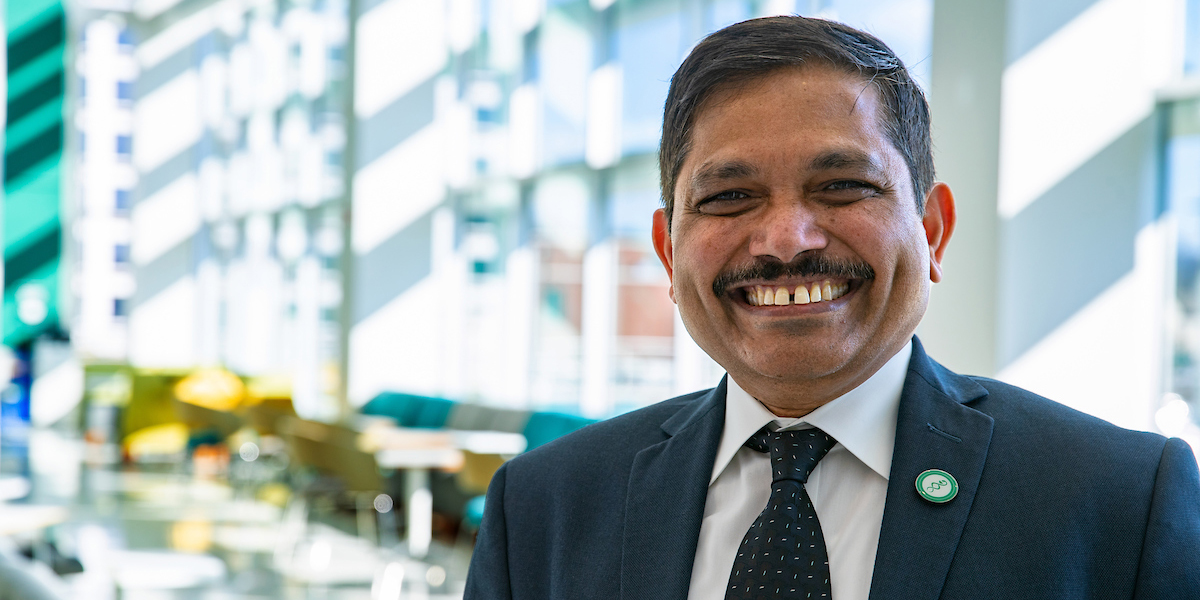 Kanneboyina "Raju" Nagaraju has been appointed dean of the School of Pharmacy and Pharmaceutical Sciences. Image Credit: Casey Staff.
By Katie Ellis

Binghamton University Executive Vice President and Provost Donald Nieman is pleased to announce that Kanneboyina Nagaraju, known as Raju, has been appointed dean of the School of Pharmacy and Pharmaceutical Sciences after a nationwide search. He will begin his new role May 12.

“Raju is not only a world-class scientist, he is a leader, innovator, strategic thinker and mentor who listens well and inspires people to do their best,” said Nieman. “He has been a key part of the school’s leadership for six years, and in the past year, I have watched him address challenging situations, prepare the school for a successful ACPE verification visit, and foster collegiality and teamwork. Raju is dedicated to the school, passionate about research and pharmacy education, and committed to our students. He will be a great dean.”

“Our goal has been to create a research-intensive school that advances research in pharmaceutical sciences and offers students innovative pharmacy education that prepares them to practice at the top of their license,” said President Harvey Stenger. “As an outstanding scientist, Raju is the perfect candidate to lead our School of Pharmacy and Pharmaceutical Sciences in the next phase of its development. He is a distinguished researcher whose discoveries have led to development of life-enhancing drugs, and he is passionate about educating outstanding pharmacists who will provide evidence-based, patient-centered care to diverse populations.”

Nagaraju, currently vice dean of the school, joined the faculty at the School of Pharmacy as a tenured professor and founding chair of pharmaceutical sciences in 2016. He stepped down from the chair position in 2021 when he became vice dean. He also serves as interim chair of the Department of Health Outcomes and Administrative Sciences.

“I’m honored to accept this position and help continue building on the successes already achieved by the School of Pharmacy and Pharmaceutical Sciences by fostering aggressive growth of translational science and clinical research enterprises, and improving visibility and national rankings,” said Nagaraju. “As a new pharmacy school, we are entering into competition with more than 140 schools at a time of declining enrollments. We must embrace and lead change by integrating pharmacists as critical members of healthcare teams and deliberately future-proof our graduates by emphasizing patient management skills, leadership and critical-thinking skills to better adapt to changing practice environments.”

Named a SUNY Empire Innovation Scholar by the State University of New York Board of Trustees in 2017, Nagaraju rose through the academic ranks at George Washington University prior to coming to Binghamton, beginning as an associate professor of pediatrics in 2005, and becoming a tenured professor of integrative systems biology and pediatrics. He also served as an adjunct professor of pharmacology at Dalhousie University in Nova Scotia, Canada, from 2014–2019.

Prior to his tenure at George Washington University, he was an assistant professor of medicine in the Division of Rheumatology at Johns Hopkins University School of Medicine from 1999–2005.

Nagaraju held a research appointment with the Children’s National Medical Center from 2005 to 2016, serving as associate director, then director of the Research Center for Genetic Medicine. He also served as director of the pre-clinical Phenotyping and Drug Testing Facility at the Research Center for Genetic Medicine for 11 years.

An expert on translational research in autoimmune and genetic muscle diseases, Nagaraju has been funded by the National Institutes of Health, the U.S. Department of Defense, the Myositis Association, and numerous foundations. He holds 10 patents with Eric Hoffman, associate dean for research and research development at the School of Pharmacy and Pharmaceutical Sciences, and medicinal chemist John M. McCall, and has co-founded ReveraGen Biopharma with them. Their collaboration has led to the identification of vamorolone, a powerful anti-inflammatory drug that resembles standard glucocorticoids, yet significantly reduces side effects. Vamorolone has received orphan drug status in the U.S. for the treatment of Duchenne muscular dystrophy, and the FDA is expected to make an approval decision later this year. Nagaraju also co-founded Agada Biosciences with Hoffman, to facilitate preclinical and clinical drug development services for neuromuscular diseases.

“I am looking forward to working with Raju after we both assume our new duties this summer,” said incoming Executive Vice President for Academic Affairs and Provost Donald Hall. “It was a pleasure to meet him when I was on campus recently and I know that he will lead SOPPS into even greater national prominence in the future. He is a deeply caring and skilled administrator and will be a key member of my leadership team.”