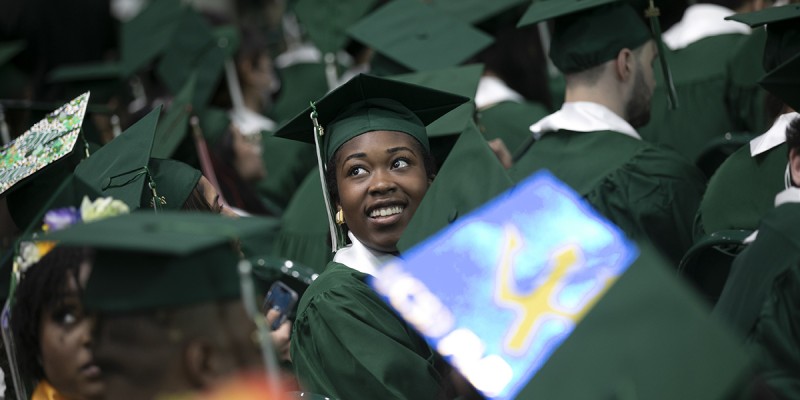 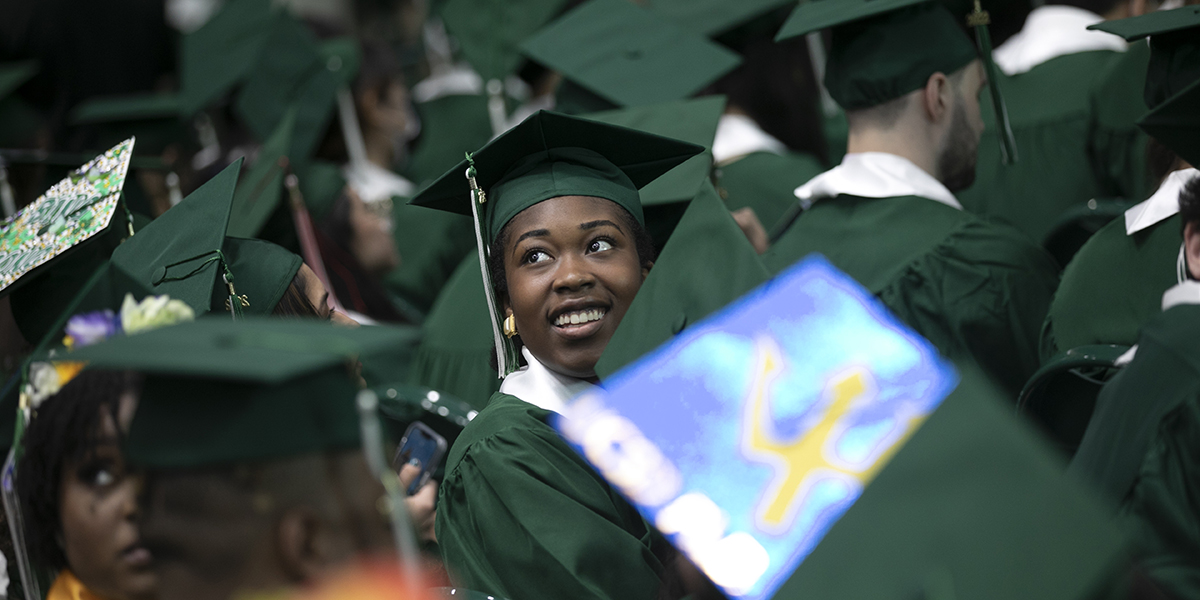 A graduate searches for family in the stands, amid a sea of mortarboards. Image Credit: Jonathan King.
By Jennifer Micale

You never know quite where Harpur College will take you, which chance meeting or unexpected opportunity will alter the course of your life.

For Cisco Systems chief government strategy officer Michael Timmeny ‘73, his Harpur College education and experience as a residence director landed him his first job working for a Congresswoman on Capitol Hill. Healthcare executive Lee Perlman ’80 met his wife at Endicott Hall and changed his entire trajectory.

Both received Alumni Awards during two of the three Harpur College of Arts and Sciences Commencement ceremonies on May 21.

During all three ceremonies, Harpur College Dean Celia Klin urged graduates to reflect on the moment and the journey that led them to Commencement, both the victories and the challenges. The latter includes the pandemic, which not only shaped students’ academic experience, but their personal lives as well.

During ceremonies attended by proud friends and family, there was also an uninvited guest that left an undeniable mark on this year’s graduates: the coronavirus pandemic.

“We graduated during a pandemic. There is so much to unpack with those five words, so much history and sacrifice underneath such a small statement,” said English and theatre major Klaire Martinez, the student speaker during the Harpur 2 ceremony. “This has been one of the most difficult times to be a student in a very long time.”

“If the past few years have taught me anything, it’s that we can take everything the world throws at us head-on,” she continued. “We are the generation of passion, purpose, fighters, heroes, Common Core guinea pigs, Robin Hoods, survivors.”

Timmeny agreed. No generation in the past 75 years has confronted more chaos than Generation Z, he pointed out. Born around the time of the Sept. 11 terrorist attacks, this generation has grown up with the aftermath of the 2008 financial crisis, the opioid crisis and school lockdown drills. Today’s young people are also confronting the impact of climate change, racial injustice and the pandemic, and witnessing the erosion of peace and democracy worldwide.

“Don’t let anyone tell you that you are soft. In my view, you are really tough as nails,” Timmeny said.

After earning his bachelor’s degree in history and political science from Harpur, Timmeny went on to become senior vice president and chief government strategy officer for the multinational technology company Cisco, where he leads the company’s government relations worldwide and oversees the Country Digital Acceleration program, which partners with governments to design digital solutions for societal problems. Prior to joining Cisco, he spent more than 20 years on Capitol Hill, working for seven different members of Congress.

Timmeny also remains active at Binghamton, serving on the Harpur College Advocacy Council and the Binghamton University Foundation Board of Directors. In 2016, he established a scholarship for Binghamton students interested in pursuing a career in politics and public service; he also provides mentorship and professional development for scholarship recipients.

As graduates from the State University of New York system, Binghamton alumni are the direct beneficiaries of a successful and courageous political movement to invest selflessly in the state’s young people, Timmeny told students during the ceremony. He urged graduates to seek out people different from themselves for inspiration and guidance, and to someday become mentors themselves.

“Share what you have learned with future young people. Lend your hand to be a mentor — just like those who helped you,” he said. “It will be both satisfying to you and fulfilling — which is the goal of life — and will lead to a better and kinder, society, country and world.”

Philosophy, politics and law major Arkiatou Keita, who spoke at the third Harpur ceremony of the day, expressed her appreciation for all those who took part in the Binghamton experience, from faculty and staff to fellow students. An international student from Africa, Keita plans to become a human rights lawyer; following graduation, she will work as a paralegal while preparing for law school.

“I landed here in Binghamton all the way from Mali, a country in West Africa that is 5,000 miles away. This is not by mere chance, but because the Binghamton admissions team took a chance on me, just like they did with each of you,” Keita said. “They bet on all of us, saw our potential and believed in us. Although we don’t all know each other personally, we’re closely connected through this place.”

Biological sciences major and future medical student Christopher Bergamini, the student speaker at the first Harpur Commencement ceremony of the day, shared Keita’s attitude of gratitude, although he acknowledged that there were some challenging days.

Bergamini transferred to Binghamton in the spring, and his first day on campus was a disaster: below zero temperatures, arguments with his mom on the drive up from Westchester, their car stuck in a snowbank in the parking lot. Like Perlman, he ended up living in Endicott Hall — where he made friendships that changed the trajectory of his life.

“I’ve learned during my time here that the best way to be proud is to be thankful. It’s easy to dwell on losses and disadvantages, so easy to be negative. We can say that we lost a lot of our ‘college experience’ and we’d be correct,” he said. “But I don’t think that is the way to live. So today is a day to say ‘thank you.’”

Perlman’s start at Binghamton was similarly inauspicious. He lost his father at the age of 17 and his mother, who suffered from alcohol use disorder, had abandoned him and his brother. He went to Brandeis University on a scholarship but dropped out after a mental health crisis. Binghamton was a fresh start.

“If you met me on Jan. 11, 1977 — my very first day at Binghamton — and someone asked you, ‘What are the odds that this guy will be a success and come back here 45 years later to deliver a Commencement speech?’, trust me that your response would have been ‘zero,’” Perlman recounted.

It proved to be the start he needed. After graduating with a bachelor’s in psychology, Perlman earned his MBA at Cornell University and served as president of Greater New York Hospital Association Ventures for almost 30 years. He is still the group’s executive vice president and chief administrative and financial officer.

Not only did Binghamton lay the foundation for his education and career, Perlman made lifetime friends and met his future wife, Linda, during his second semester and her second week on campus.

“I always thank the ‘dorm gods’ for putting us together. The dorm gods are, of course, the mystical staff who decide who gets to live where,” he quipped. “We should never take the happenstance of being together at the right place and the right time for granted.”

In addition to his business success, Perlman is a consummate philanthropist, founding his company’s Summer Enrichment Program for students and The College Access and Leadership Program in partnership with the YWCA to promote educational equity, leadership and economic empowerment for low-income girls. Deeply committed to the arts, he serves as treasurer for The Actor’s Fund, co-chair of the Berkshire Theatre Group and vice chair of the American Theatre Wing. He also serves as chair of the organ and tissue donation organization LiveOnNY.

Perlman has given back significantly to Harpur as well, serving in numerous volunteer roles, mentoring students and speaking at events, as well as being a generous donor. He urged today’s graduates to consider ways they can contribute to the future.