Binghamton University announces appointment of dean of the School of Management 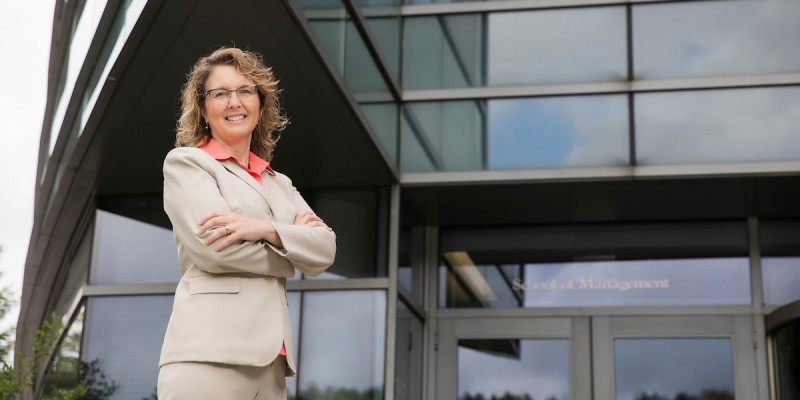 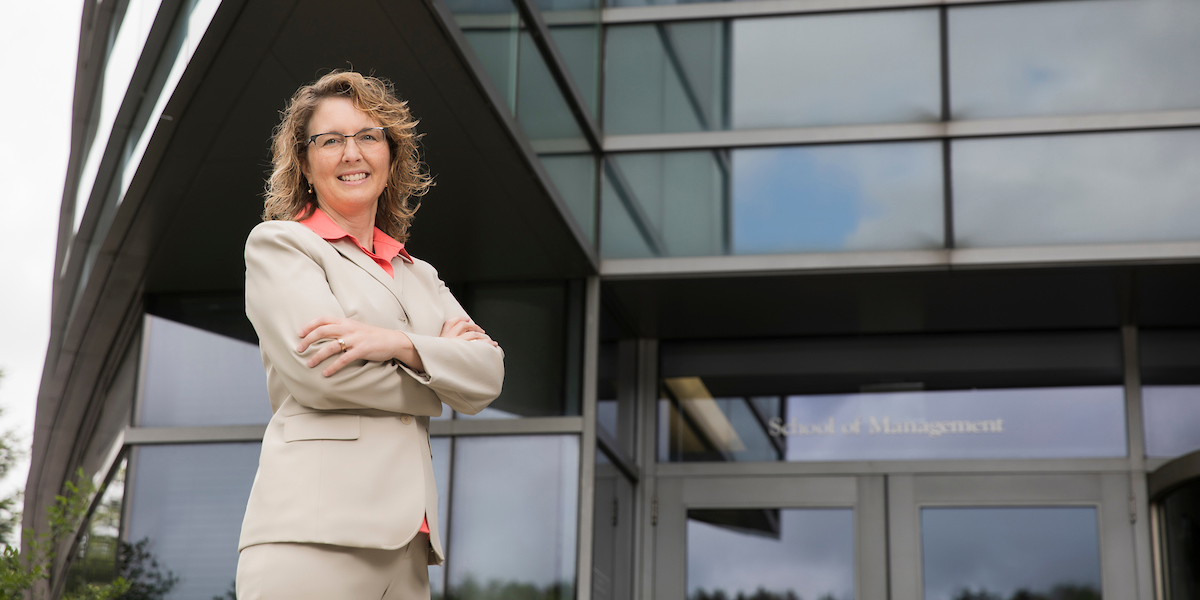 Shelley Dionne will begin her duties June 9, as the dean of the School of Management at Binghamton University. Image Credit: Jonathan Cohen.
By Katie Ellis

Binghamton University Executive Vice President for Academic Affairs and Provost Don Nieman is pleased to announce that Shelley Dionne has been appointed to serve as dean of the School of Management (SOM) after a nationwide search. She will begin her duties June 9.

”Shelley prevailed over a very strong pool of candidates, demonstrating that she is the right person to lead SOM in its next phase,” said Nieman. “She loves SOM, appreciates all that is great about it, and has the ability to work with the faculty and staff to make a great school even better.”

“I have worked with Shelley in her capacity as our NCAA faculty representative and as associate dean, and I have consistently been impressed with her strong work ethic, intelligence, scholarly ability, vision, and commitment to excellence and to Binghamton,” said President Harvey Stenger. “She will be a great dean and take SOM to new levels of success.”

Dionne, who has been associate dean of faculty development and the PhD program for the School of Management since 2018, earned her bachelor’s degree in nutrition from Rochester Institute of Technology, and her MBA with a concentration in organizational behavior and human resources management from Binghamton University. She was part of the first cohort of students in the SOM doctoral program, earning her PhD in 1998 in Leadership and Organizational Behavior with a minor in learning and development.

She also has served as the area chairperson for Leadership and Organizational Sciences for the SOM since 2019.

“I couldn’t be more honored to serve the School of Management as dean,” said Dionne. “As I told the search committee, there is only one dean position in all of higher education I would consider: Binghamton University’s School of Management. I have found a home and family at the SOM that I would never consider leaving.

“Working with Upinder Dhillon these past four years was an excellent foundation for understanding the challenges of being one of the top public business schools in the country,” she said. “But SOM has an amazing faculty and staff that continues to innovate business education to challenge our outstanding students. I look forward to working with SOM faculty, students and staff to continue to create new programs that provide a unique value to our students, and to working with our SOM alumni to collaborate on how to achieve even higher levels success in the coming years.”

Dionne joined the SOM faculty as an assistant professor in 2001, was promoted to associate professor in 2004, and became a professor in 2017. She has been the associate director of the Center for Leadership Studies since 2007, and a fellow of the center since 2001. She served as the faculty athletics representative for NCAA Division I sports for three years, and as the Leadership Quarterly yearly review editor for one year and as its associate editor for five years. In the 1990s, she was an adjunct for the SOM, and also project director and research assistant on a four-year Army Research Institute Grant.

Her research focuses on leadership development, group dynamics and decision making, delving into the identification of relevant leader/follower/group behaviors to determine the most effective and appropriate means for measuring and assessing leadership, group development and decision-making processes. She also studies the connection between levels of analysis issues and learning and development in both leadership and group/team contexts.

Dionne has been principal or co-principal investigator on grants totaling more than $2 million from agencies including the National Science Foundation, the U.S. Army Research Institute for the Behavioral and Social Sciences, and the Broome-Tioga Association of Chief School Administrators. She was also principal investigator for the Binghamton University Leadership Academy, later the Binghamton University Leadership Development Program, from 2008 until 2020.

Dionne has been deeply involved in service at Binghamton, most recently as a member of the Strategic Planning for Research Enterprise Evolution (SPREE) – Climate Change Committee. She has served on the Middle States Accreditation-Planning, Resources and Institutional Effectiveness Committee, the PRODiG Committee, University Personnel Committee for both professional schools and arts and sciences, the Graduate Council and the Sustainable Communities Transdisciplinary Area of Excellence, among many others.

“I truly look forward to working with Shelley to help realize her ambitions for SOM,” said incoming Executive Vice President for Academic Affairs and Provost Donald Hall. “Her deep commitment to and passion for Binghamton University is extraordinary and I know SOM has a great future under her leadership.”