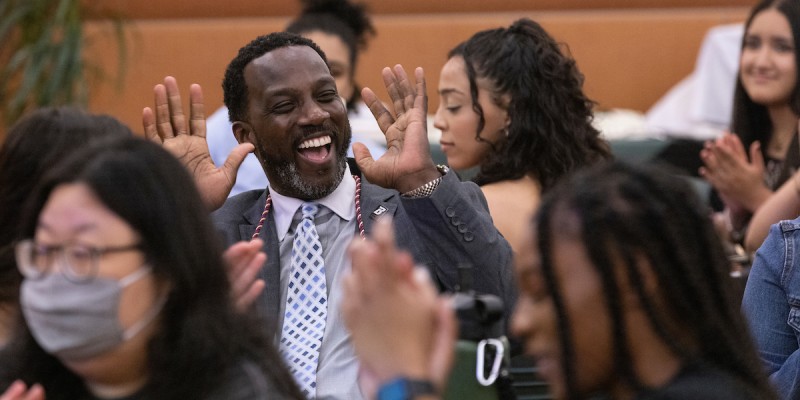 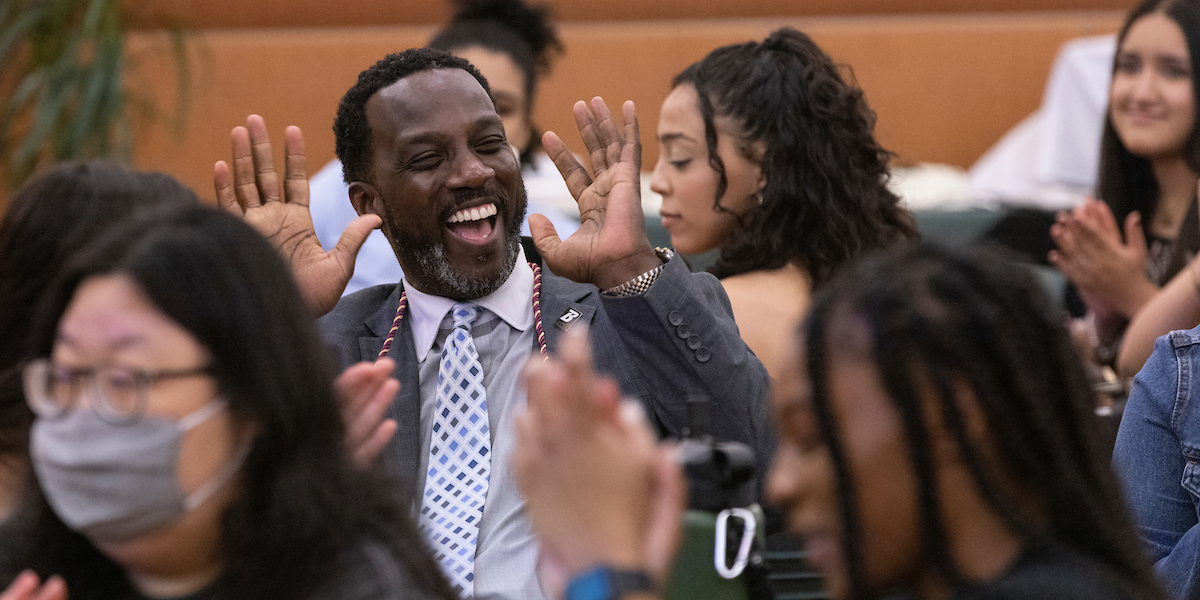 Randall Edouard, the dean of students who was hooded with his doctorate from Binghamton University in May, spoke at and immersed himself in the celebration during the University's first-ever, first-generation cording ceremony, spearheaded by the BFirst Network. Image Credit: Jonathan Cohen.
By Kaitlyn Hart '22

This year, the BFirst Network (BFirst) held its first-ever, first-generation college student cording ceremony, when over 150 undergraduate students received cords to wear as they crossed the stage during Commencement.

BFirst, a support network for students who are the first generation in their family to attend college and receive a baccalaureate degree, defines a first-generation college student as someone with parents who may or may not have graduated from high school or grade school, who attempted to go to college and dropped out, who have degrees earned in another country and are unable to help their child navigate the American higher-education system or obtain a career in their chosen field, and those students who lack support from parents or guardians.

One way to celebrate and raise awareness was to give first-generation students an honor cord to wear on graduation day. The cords, which were provided free of cost from the Division of Students Affairs, were given to 175 students who self-identify as first-generation college students.

The maroon and gold cords were chosen because they held symbolic meaning that represented first-generation students, according to Marissa Zelman, the assistant director of Student Support Services and TRIO.

At the event, speakers including Donald Neiman, the executive vice president for academic affairs and provost, and President Harvey Stenger applauded the students for their accomplishments.

Randall Edouard, the dean of students and a Binghamton alum, encouraged students to break free of their anxiety and doubt and try to overcome impostor syndrome, since they earned their place at Binghamton and are proving that by graduating.

“That’s what’s amazing about being first-generation — the journey, the resilience,” Edouard said. “To just be at the steps of a college or university, especially a great one like Binghamton University. Just managing that is such an arduous task as first-generation students.”

Rosie Duplessy, a 2022 graduate who majored in biochemistry, attended the ceremony and received a cord.

“I almost cried when [Edouard] was giving his speech,” Duplessy said. “It was really heartfelt; I’m tearing up just thinking about it. As a first-generation college student, there are so many obstacles you have to overcome, especially when you don’t have anyone to depend on other than yourself. Sometimes your parents don’t understand the amount of stress you’re under. I really resonated with what he said.”

Edouard also spoke of the struggles that he had when trying to get into college, since guidance counselors at his high school deemed him “not college material,” making it harder for him to find the help and guidance that he needed.