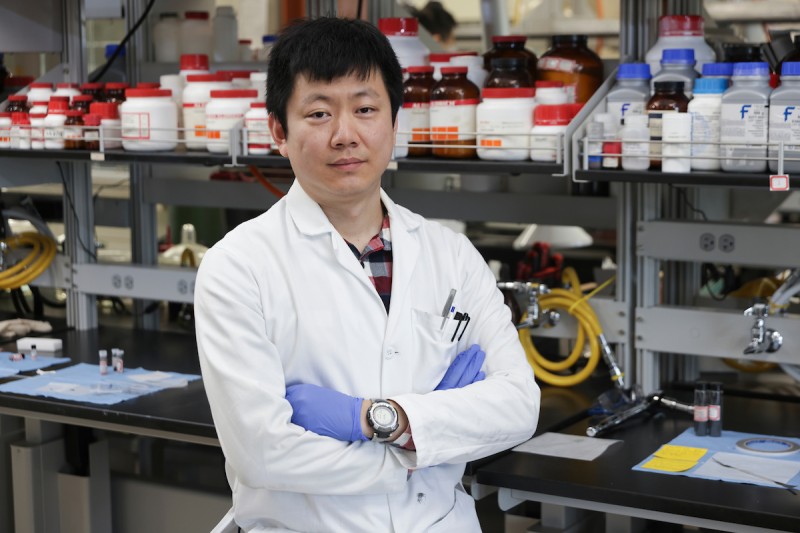 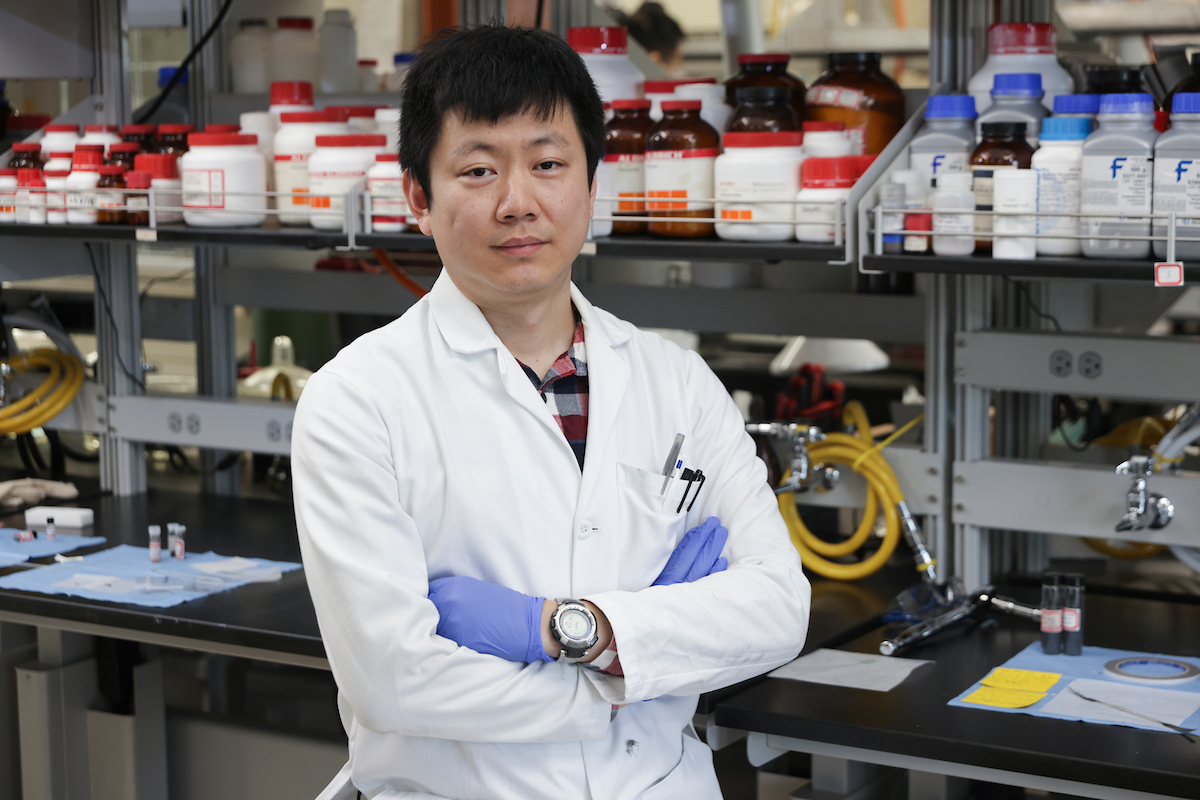 Hao Liu, Assistant Professor of Chemistry at Harpur College of Arts and Sciences, photographed at his laboratory in the Center of Excellence building at the Innovative Technologies Complex, Thursday, June 2, 2022. Image Credit: Jonathan Cohen.
By Jennifer Micale

Lithium-ion batteries power smartphones and tablets, laptops and electric cars. But the silvery metal lithium isn’t so easy to obtain, which would make it a costly option for large-scale operations such as electric grid energy storage.

Sodium-ion batteries are an affordable and promising alternative. After all, sodium salt is hardly rare; the Earth’s oceans are full of it.

“It’s very cheap and much more abundant than lithium,” explained Assistant Professor of Chemistry Hao Liu, who received a $559,276 CAREER Award from the National Science Foundation this spring for research into sodium-ion batteries.

Batteries of this type would particularly be a boon for the growing renewable energy sector, since the forces that generate power are intermittent.

On the periodic table of elements, sodium is located directly below lithium, which means that they are members of the alkali metal group and share many characteristics. So do the batteries made from them, although there are differences, too.

Rechargeable batteries rely on the intercalation reaction, in which ions are inserted or removed from the layers that make up the electrodes. Because sodium ions are physically larger than lithium ions, however, these layers are more likely to collapse when ions are removed during use, compromising the battery’s structural integrity. After a few recharges, the battery begins to lose storage capacity as a result.

It’s a problem that Liu hopes to solve with structural pillaring, a process that would insert specific ions into the layers, a bit like how pillars in a building hold the stories together, he explained.

Pillaring, however, has its own downsides; just as pillars on a building floor might impede the flow of people in and out of the exits, structural pillars could potentially decrease a battery’s energy flow. Liu also needs to find the optimal material to construct these pillars — all problems he hopes to tackle in his CAREER Award research.

CAREER Awards include a public service component; to that end, Liu is seeking to expand public knowledge of electrochemical energy storage and prepare undergraduate and graduate students for the clean-energy workforce.

Battery science draws on knowledge from multiple disciplines, Liu pointed out, which can make it a difficult field to learn about, initially.

“One of the key components is building up interactive pedagogy in classroom teaching,” he said. “I want to fill that gap by bringing together all the necessary knowledge, at least for undergraduates, on how batteries work.”

One idea: Use smartphone operating systems as a micro-lab to monitor battery voltage and current, supplementing classroom learning. The data would provide insight into battery capacity and how it degrades through time, he said.

Conventional lithium batteries are sensitive to air, so Liu is also interested in developing a lab course that would allow students to assemble and analyze aqueous-based batteries. He’s also interested in creating public demonstration materials that explain the workings of rechargeable batteries to a wide range of audiences, particularly students and teachers in the K-12 system.

Think of it, in essence, as a recharging system of another sort: to inspire future scientists and researchers.

“It is important to understand the fundamentals of how a battery works in order to develop a strategy to make a better battery,” he said.