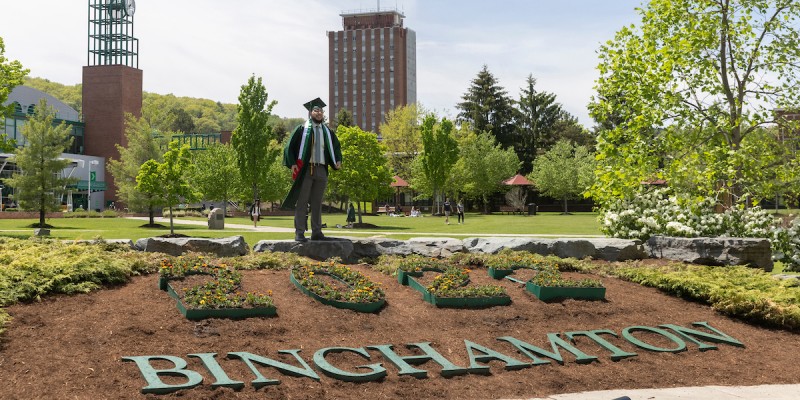 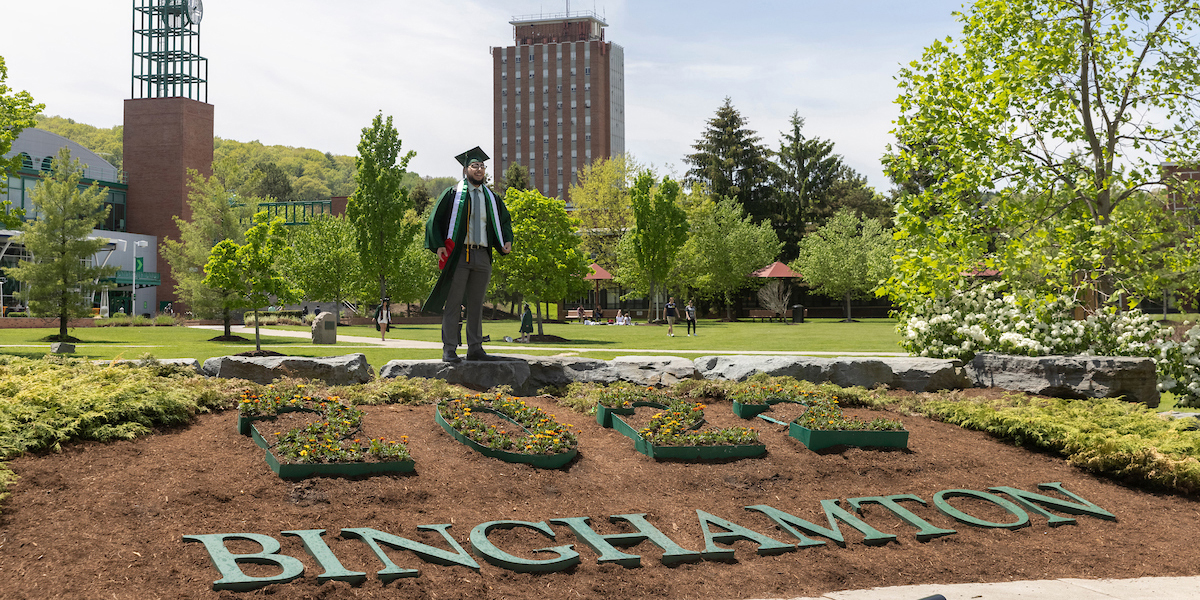 For the beginning of the second quarter of 2022, the Division of Communications and Marketing was focused on supporting the launch of the University’s $220 million comprehensive gifts campaign — EXCELERATE: Moving at the speed of Binghamton, held April 9, on campus.

Later on, the focus turned to ending the semester well, with a great deal of effort put into Commencement activities, including writing and promoting graduate profiles, covering the ceremonies as well as helping to prepare scripts for the 10 ceremonies.

Additional work included drafting and/or editing a wide range of messages for the campus including about Ramadan, the shooting in Buffalo, and announcements of the appointment of deans for the School of Pharmacy and Pharmaceutical Sciences and the School of Management.

More than 65 stories were published in BingUNews during the quarter, providing a solid base of stories to push out to readers each Saturday morning. Meanwhile, the Binghamton University Magazine hit mailboxes, as did the Watson Review. Confluence, Reaching Higher and Harpur Perspective school magazines are well underway, in the copyediting and design stage.

The communications manager for each school continues to work on communications plans for the 2022-23 academic year, and the division is working with Carnegie and Undergraduate Admissions on Binghamton’s PERSONALITY DEFINITION STRATEGIC POSITIONING + MESSAGING DEVELOPMENT that should be revealed in late summer.

Creative Services was kept busy during the second quarter with preparing four different programs (undergraduate, master’s, doctoral and School of Pharmacy and Pharmaceutical Sciences) for the 10 Commencement ceremonies, as well as print materials for the upcoming College of Community and Public Affairs gala and the Binghamton University Forum gala that was held in June. In addition, a great deal of effort was put into materials for the EXCELERATE campaign launch, graphics for the lobby of the Health Sciences Building and materials for the first in-person Orientation sessions held after the pandemic curtailed campus activities. The department also worked with writers and editors to design and have printed the spring issue of the Binghamton University Magazine, and the annual Watson Review.

Work on the web included personalizing content based on the audience for the Undergraduate Admissions homepage, Google Data studio reports for BingUNews and blogs, Slate portal updates and work on the EXCELERATE campaign website. Websites were developed further for occupational therapy, physical therapy, speech and language pathology, and the Motion Analysis Research Lab. The department provided built the structure and provided support for the 2022-2023 Bulletin, provided email development and support for undergraduate and graduate student recruitment, and continues to maintain the health of binghamton.edu by reviewing and updating broken links; meta data; spelling and grammar; OmniUpdate account training, account creation and deletion; and handling requests from campus partners,

Communications and Marketing supports all anti-melt efforts, which include targeted messaging (email and social media) for first-years, transfers, international and Binghamton Advantage students, plus parent communications.

The Undergraduate Admissions Instagram and Facebook accounts both saw a gain in followers this quarter (Facebook +5%, Instagram +13%). The pages have been sharing content about food/dining, academic offerings, academic awards/achievements, research, clubs, life on campus, appealing updates and interactive content (giveaways, trivia, polls, Q&As, etc.). We created a National College Decision Day campaign for the week leading up to the May 1 enrollment deadline. We partnered with the Bookstore and Dining Services for a giveaway post that achieved increased follower activity: 1,120 likes and 959 comments. We saw a substantial increase in activity flow: 50k accounts reached (which was double last year’s campaign) with an increase of 745 new followers. We have also completed several interviews of current students for #HumansofBinghamton posts and have had several Instagram takeovers, “day in the life” content and Q&A sessions led by Binghamton students with success rates exceeding 1,500+ views with 25+ DMs/questions. In the upcoming months we will be sharing new student content starting with an Orientation Advisors Q&A takeover alongside an Orientation giveaway. We will also hold a Move-in-Day live Q&A paired with another giveaway.

Binghamton University faculty made a major impact in the media for their research and expertise, landing hits in leading publications such as The New York Times, Forbes, USA Today, Fast Company and many others. From discussing pushback against racial and gender studies in American schools to a study that shows how spiders use their webs to extend their hearing, our faculty helped to bring Binghamton University into the spotlight and showcase the expertise and the quality of research taking place at the University.

Commencement featured prominently on the University’s social media this semester. Each ceremony was broadcast live on YouTube, garnering thousands of views and excited comments from parents and family. We also posted photo albums and galleries to our social media accounts each day, as well as a recap video. In addition, we posted two blogs prior to Commencement, “A Bucket List for the Binghamton Class of 2022” and “Your Guide to Commencement ‘22,” as well as 10 student profiles.

The University released the Binghamton Buzz video series, in which host Owen Holland conducts “man-on-the-street” interviews with students about various topics. This semester, Holland produced a video spotlighting the return of Spring Fling and another featuring movies and TV shows made possible by Binghamton alumni.

Binghamton in the News