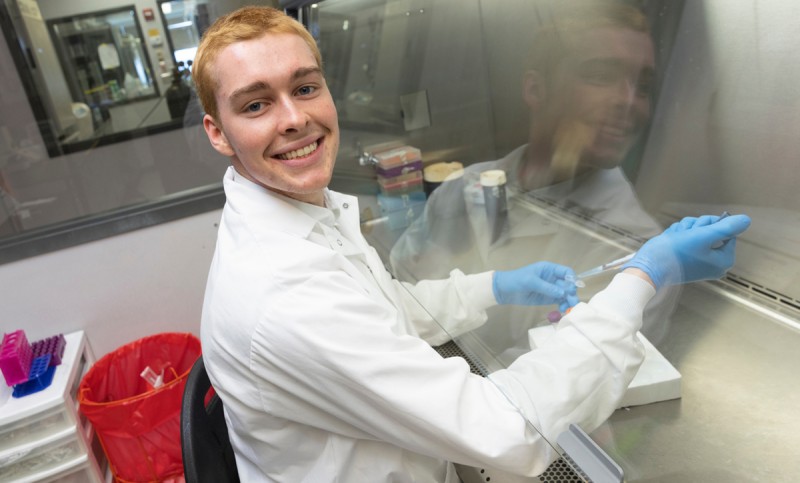 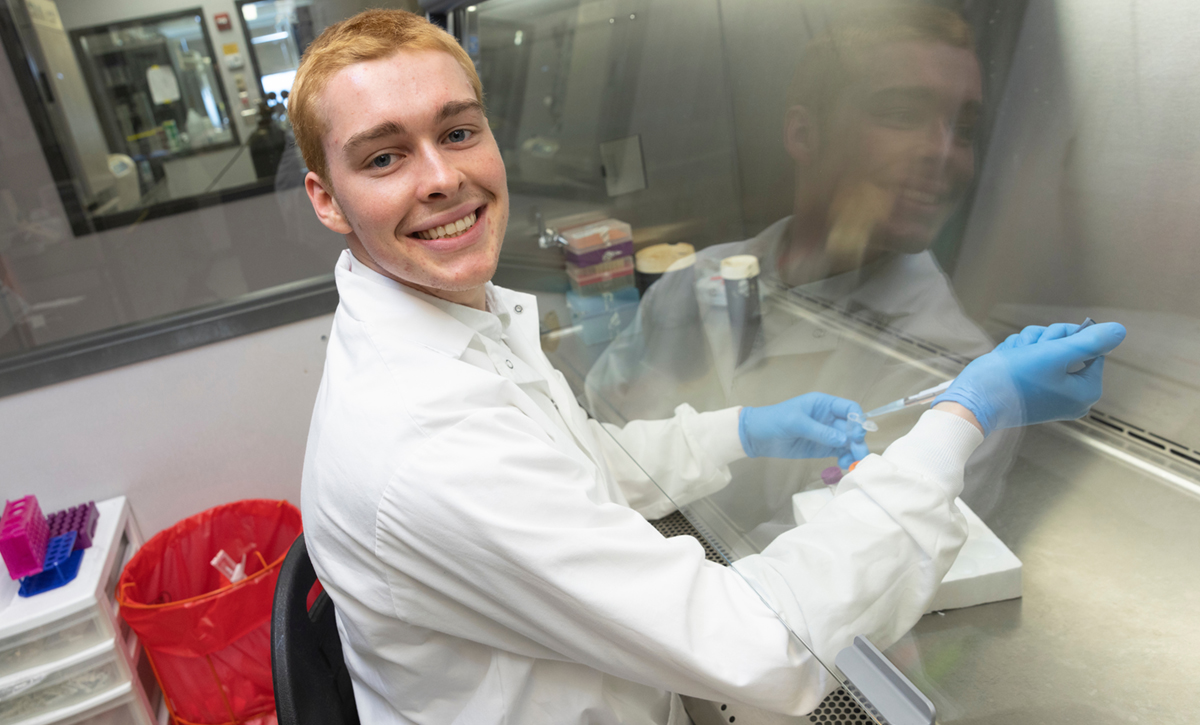 As a first-generation college student, Flynn Anderson ’22 admits he didn’t have anyone pushing him toward higher education after high school. When he decided to attend Binghamton University, he put his faith in three things: God, hard work and kindness.

If there’s any doubt that his keen mind and positive attitude, coupled with the need to help people both on and off campus, served him well during his four years at Binghamton, check out the awards he collected in the weeks before earning his bachelor’s degree in biomedical engineering: the Chancellor’s Award for Student Excellence, the President’s Award for Undergraduate Student Excellence, and the Student of Distinction Award. He also traveled to Puerto Rico to the Inclusiv Annual Conference to represent Binghamton’s diversity, equity and inclusion initiatives.

“​​Flynn is truly a remarkable student — the best that Binghamton has to offer,” President Harvey Stenger said at the Binghamton University Student Awards Gala in May.

Growing up as part of a working-class family in Union Springs, N.Y., on the shores of Cayuga Lake, Anderson graduated from high school in a class of about 60 students.

“My parents didn’t necessarily want me to go to university,” he said. “That’s where I was coming out of high school. I was not necessarily inspired to do anything. I figured I’d come in as a biochemistry major because the healthcare profession is where the money is lucrative.”

Before his first year at Binghamton, he attended a summer program meant to bridge the gap between high school and college. The on-campus visit was organized through Student Support Services, a federally funded TRIO program that offers extra support for first-generation students, income-eligible students and students with disabilities.

While learning the ins and outs of office hours, tuition, loans and other essential information, he met with someone from the Thomas J. Watson College of Engineering and Applied Science and learned about its Department of Biomedical Engineering. Something told him that was the path he wanted to take.

“I started to see how the research there was affecting people’s lives firsthand,” Anderson said. “My parents weren’t getting the care that they needed — the same with my uncle and my grandparents — and that comes from low-income health disparity. I figured I can change that. Biomedical engineers are the people who are going upstream and fixing those issues before they even happen.”

During his time at Binghamton, he worked in the lab of BME Associate Professor Gretchen Mahler, researching bioprinting for kidney and heart cells. In the summer of 2020, he worked as a quality control intern at Regeneron Pharmaceuticals.

He also was one of 10 U.S. students selected for the National Science Foundation Research Experience for Undergraduates, through which he participated in the Harvard Summer Research Program in Kidney Medicine at Brigham and Women’s Hospital in Boston.

He and his team bioprinted novel kidney nephrons, which eventually may be used in drug therapy and even transplant surgery. He was invited back for an additional winter experience, where he presented at a National Institutes of Health conference.

Anderson has nothing but praise for the faculty at Binghamton and Watson College, who offered inspiration and help both academically and personally.

“I’ve only had amazing experiences, and I’m not saying that lightly,” he said. “Coming in and knowing nothing about calculus, nothing about physics, nothing about organic chemistry or the immune system — basic, foundational biology and chemistry — and having these people to guide me was so instrumental.”

Mahler, who is also the interim dean of the Graduate School, said that admiration is mutual: “I have had the pleasure of working with Flynn as his research advisor. I have been able to watch as he has become a mature, resourceful and independent scholar. I can’t wait to see what he does next!”

Outside of the classroom. Anderson’s extracurricular activities included membership in the Binghamton University Nature Preserve Research Team and the Biomedical Engineering Society, teaching robotics to middle and high school students through the Science and Technology Entry Program/Upward Bound Math-Science Robotics Program, and working as a peer mentor through SSS. He also served as the vice president of public relations for the Hinman College community.

Off campus, he has worked with Binghamton Food Rescue, and he started his own business — Thread Cemetery Clothing — designing, printing, sewing and selling clothing derived from discarded fabric and second-hand materials. In addition, he writes and performs slam poetry.

Anderson is spending the summer as a nuclear waste vitrification researcher at the Rutgers University School of Engineering, and then he is taking a year off from school. His plans include making stoneware, sewing clothing, getting involved with community outreach and applying to fellowships. Although he loves research and is exploring a PhD in clean energy, he ultimately hopes to focus his career on teaching.