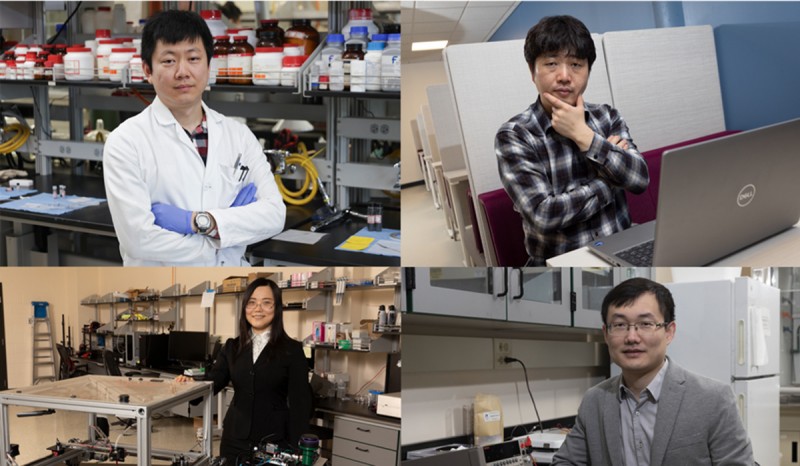 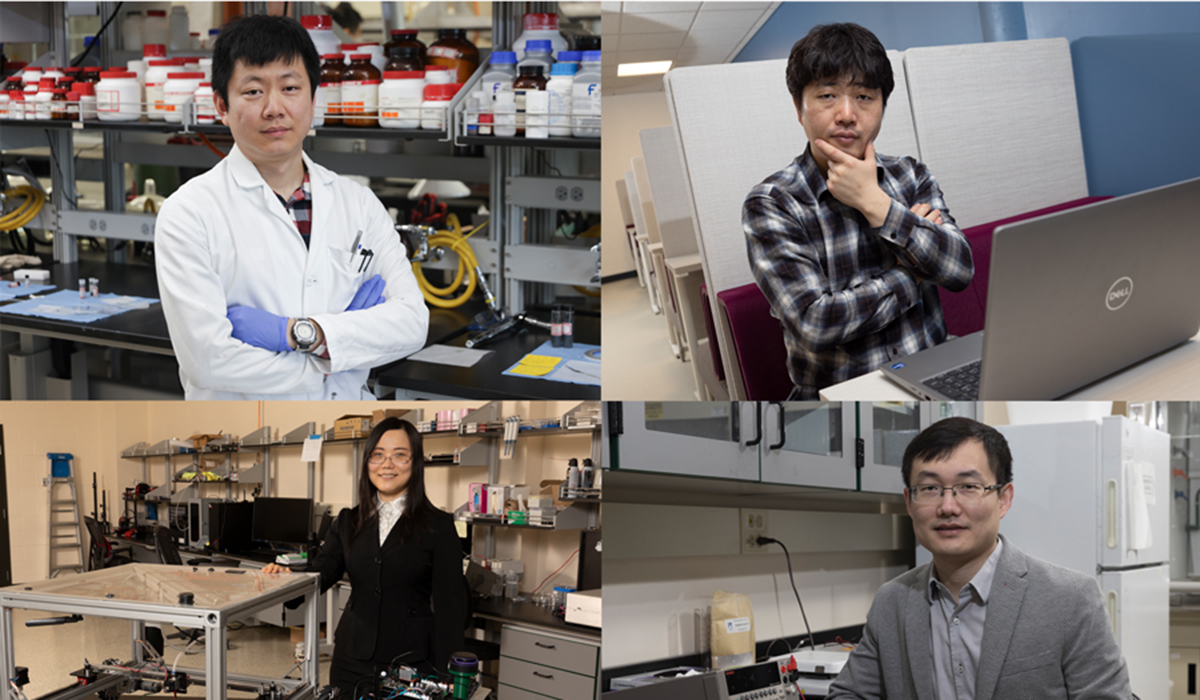 Hao Liu, assistant professor of chemistry, will continue his research into sodium-ion batteries.

Lithium-ion batteries power smartphones and tablets, laptops and electric cars. But the silvery metal lithium isn’t so easy to obtain. Sodium-ion batteries are an affordable and promising alternative.

Batteries of this type would be a boon for the growing renewable energy sector, since the forces that generate power are intermittent.

On the periodic table of elements, sodium is directly below lithium. They are members of the alkali metal group and share many characteristics. So do the batteries made from them, although there are differences, too.

Rechargeable batteries rely on the intercalation reaction, in which ions are inserted or removed from the layers that make up the electrodes. Because sodium ions are physically larger than lithium ions, however, these layers are more likely to collapse when ions are removed during use, compromising the battery’s structural integrity. After a few recharges, the battery begins to lose storage capacity as a result.

It’s a problem that Liu hopes to solve with structural pillaring, which would insert specific ions into the layers, a bit like how pillars in a building hold the stories together, he says.

Seunghee Shin, assistant professor of computer science, conducts research that may reduce the communication time between smart devices and the cloud.

His idea is to shorten the distance between our devices and the information they need by creating a series of memory caches along the route, which would make cloud-based programs run faster. The innovations rely on technology such as SmartNICs and non-volatile memory.

A network interface card, or NIC, is a hardware component that connects a computer to a network, almost always using Ethernet. The latest SmartNICs include advanced processing and memory capabilities that improve the user experience. Non-volatile memory (NVM) can retain stored information in memory chips even after the power is removed. It is often used for secondary or long-term storage not accessible to a device’s central processing unit.

Shin believes SmartNICs and NVM can be leveraged for improved cloud computing.

“The cloud server is so far away over the network Ethernet — you have to go there and grab the data and bring it back,” he says. “However, we have a much, much stronger NIC now, which can do a lot more in your local machine.”

Shin’s research could change the way that hardware and software are designed, complementing each other to satisfy software demands.

Research into nanotechnology has grown exponentially in recent years. But because of the size involved — one nanometer is a billionth of a meter, smaller than a strand of human DNA — current techniques cannot independently manipulate large numbers of nanoscale objects precisely the way you might see in a sci-fi movie.

Yu will study ways to overcome these limitations.

She is trying to manipulate many micro- and nanoparticles with controlled three-dimensional poses and characteristics into functional devices, interconnects and other useful components for a variety of applications, such as building nanorobots that can deliver drugs directly to cells.

“Right now, because of manufacturing limits, it’s really hard to build this kind of nanorobot with a lot of sensors, strong actuators and on-board batteries, and also have them communicate with each other,” Yu says.

Her research will investigate the use of electric fields to control the movements of multiple nanoparticles in a three-dimensional microfluidic environment. Each tiny wire could then go a different way to perform its own task.

In the short term, Yu hopes her work will support engineering tools for large-volume automated control of microscopic objects for smart small-scale factories that could produce useful nanorobots and nanodevices.

Ultimately, she also has a much bigger goal in mind. “We can facilitate the computational power and mimic the energy-efficient structure of the calculations in our brain,” she says. “I won’t build a human brain for this project, but hopefully I can do that in the future.”

Pu Zhang, assistant professor of mechanical engineering, conducts research that could advance soft electronics, devices that can bend or stretch without breaking.

One critical challenge is finding new materials that are highly conductive like metals yet remain super-stretchable, so researchers have sought solutions from a variety of different angles.

Zhang has an intriguing solution to the problem: Use liquid metal networks in rubber that can deform easily while remaining highly conductive.

His NSF-funded research will build on experiments that Zhang has done on gallium-indium alloy, which has a melting point around 15 degrees Celsius (60 degrees Fahrenheit). That means it is liquid at room temperature. Using a fabrication process Zhang developed at Binghamton, he was able to produce liquid metal network composites with an ultra-low amount of liquid metal, but still maintain high electrical conductivity.

Ultimately, the goal would be to use an alloy of gallium, indium and tin with a melting point of minus 20 degrees (minus 4 Fahrenheit) that could function during winter in colder climates.

“We’ve achieved over 10-fold reduction of liquid metal consumption, compared to similar materials developed by others. So our new material is much cheaper and lighter-weighted,” Zhang says. “Existing technologies can make liquid metal fibers that are thicker than 100 microns, while we can make them 10 times thinner at 10 microns.”

CAREER Award-winning projects include an educational component as well as rigorous research goals.

Liu plans to expand public knowledge of electrochemical energy storage and prepare undergraduate and graduate students for the clean-energy workforce.

Shin’s proposal includes coaching students so they can be engineers capable of creating hardware/software co-designed systems.

Yu, who will create STEM-focused outreach programs in local schools, says she especially wants to inspire more women and members of underrepresented communities to enter engineering and other science-related fields.