Internships show students how to make an impact in the community

CCPA students have completed more than 200,000 combined internship hours in a single year, contributing to the local economy 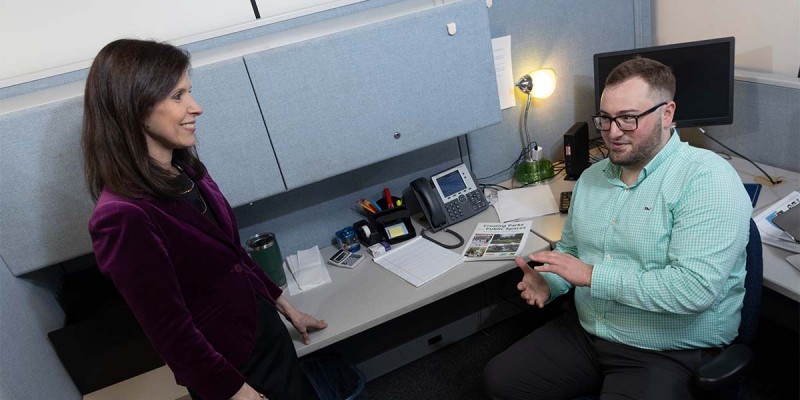 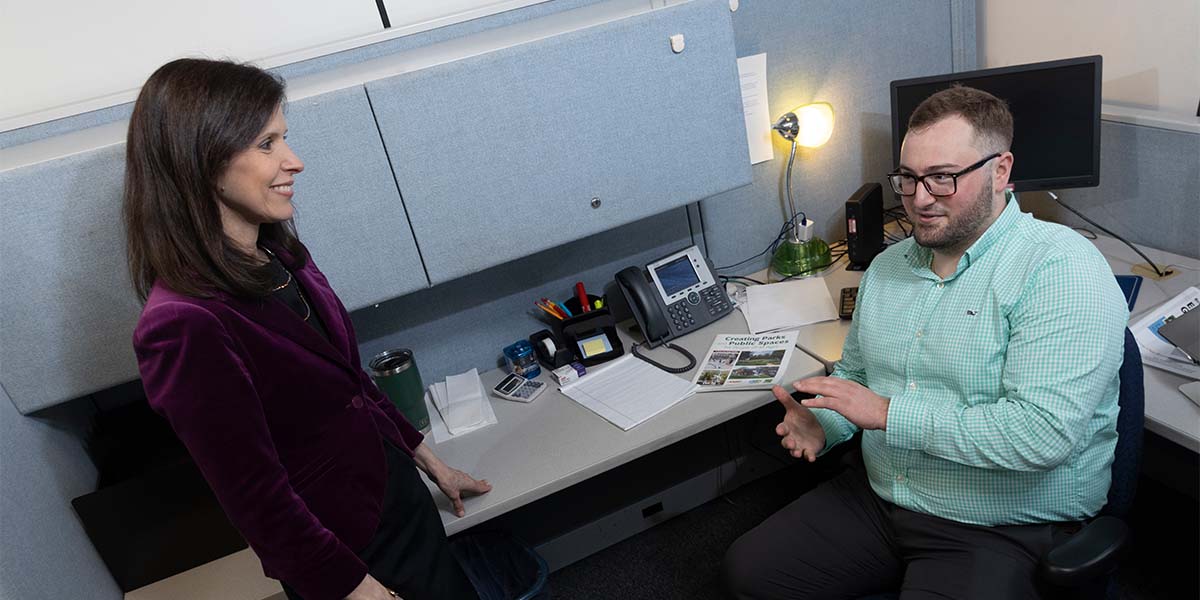 Internships help students make a difference in their community, and the unique lessons that come from those experiences prove to be invaluable tools as they take further steps to successful careers.

Katie Kuhl helped people struggling with mental or physical impairments, sometimes confronting a tangled web of problems for which there isn’t always a clear solution.

Hannah Bullington guided medical students along their challenging path to becoming doctors, growing her skills to not only show students how to succeed but also to make the best of their academic experience.

Joseph Kovar explored creative avenues for how to make the community more accessible and inviting for some of its oldest members.

And Daisy Villalva drew on her own family experiences and gained valuable insights into struggles people face building their lives in a new country.

These are some of the versatile internships that students in Binghamton University’s College of Community and Public Affairs (CCPA) take on, experiences that provide not only essential building blocks toward their degrees, but also teach and enable them to make positive contributions in their communities.

And interns have the time to show for it:

In 2019, for example, CCPA students completed more than 200,000 combined internship hours, representing a $6 million local economic impact. They have worked in nonprofits and agencies across the Binghamton area, including food pantries and schools, county agencies like the Broome County Office for Aging, and others like the Mental Health Association of the Southern Tier.

Students also bring the lessons from their internships back into the classroom and share those experiences with fellow classmates as part of a broader discussion on how to apply their skills in the community.

“We’ve had relationships with these organizations that we partner with for years, and we’re so grateful for their willingness to mentor our students,” says Megan McCabe, community liaison for the Department of Human Development in CCPA. “It’s a wonderful way to expand what teaching and learning can be outside of the classroom walls.”

’Creating public value’ in the community

In March, Kovar, a 22-year-old from Long Island enrolled in the public administration master’s degree program, began working with the Broome County Office for Aging to help implement its Age-Friendly Project.

The project, which has been in the works since 2019, looks for ways to improve upon or explore opportunities for better inclusion for people from different age groups — both older and younger. That could include assessing needs in housing, transportation and employment.

“This is an opportunity to immerse myself in the community,” says Kovar, who also aspires toward a law degree. “We’re creating public value and we’re trying to help everyone, so that motivates me a lot.”

At the Office for Aging in downtown Binghamton, program coordinator Danielle Clemens has been supervising CCPA interns since 2020. Some students have needed to complete as many as 510 hours toward their degree. Clemens says this commitment has opened the door for interns at her agency to take on active and pivotal roles in helping promote the Office for Aging’s work in Broome County.

“We’ve been able to give them really hands-on experience,” Clemens says of her work with CCPA interns. “I think they bring a lot of creativity, a lot of great research and writing skills and a really strong motivation to make a difference.”

For other students like 24-year-old Bullington, who graduated in May with a master’s degree in student affairs administration, playing an integral role in an internship has helped expand her potential marketability as she sets her sights on becoming an academic advisor.

Bullington, a native of Missouri who came to Binghamton for her graduate studies, originally aspired to become a science teacher. Her goal steered toward a career in higher education with student affairs after she discussed her options with her academic advisor, who inspired Bullington to follow a path that would allow her to still be engaged with students but offer more opportunities to support them beyond teaching in a classroom.

Bullington worked as a student affairs intern with Upstate Medical University’s Binghamton Clinical Campus at Binghamton’s Health Sciences Building in Johnson City, N.Y. She learned about the challenges third-year medical students deal with and found opportunities to support them during the rigors of their clinical work.

Every five weeks, she helps put together a “cheer-up package” for the medical students, and on a weekly basis she compiles lists of community events and ideas for fun things to do during the weekend. She also helps them in a career services capacity by offering feedback on their residency applications.

“They’re working full-time with these clinicals, pulling hospital shifts already, so I can’t pull from my own experience because it’s not a typical course load of credit hours and it requires a much more holistic view of how to support them,” Bullington says. “This internship has been so beneficial because it allows me to take that experience to any other institution and puts me at a further advantage as a student affairs professional.”

Her experience paid off: In March, she accepted a position at SUNY Upstate University as a senior career planning and development associate for the College of Medicine.

In order to help nearly a dozen students of different nationalities — Ukrainians and Chinese among them, some of whom have lived in the U.S. for years or some for just a few months — learn how to speak English, compassion and sensitivity are key, Villalva says.

The 22-year-old from Brooklyn, N.Y. interned at the American Civic Association (ACA) in downtown Binghamton, a nonprofit that assists immigrants with education and other resources to start new lives in the community. Her internship at the ACA, which was in partnership with the Binghamton City School District, involved teaching her adult students the basics of the English language.

“You don’t always know their background story, but I remember even my first week, I was trying to explain what vowels are. And how do you do that for someone who doesn’t even know how to read in their own language? It’s about being very careful with your words,” says Villalva, who majored in sociology with a minor in immigration studies through the human development program. She graduated in May.

“This internship also made me reflect a lot on my parents’ immigrant story, coming here from Mexico, and that gave it such a personal level. I see it not just as teacher-student, more like we’re friends because I can understand the struggles of taking English classes as well.”

Villalva spent three to four days a week at the ACA, teaching for three hours each day. She says the lessons she learned along the way will help her a great deal in her new job as an elementary school teacher at a charter school in New York City.

For Kuhl, a 22-year-old first-year graduate student from Queens, N.Y., pursuing her master’s degree in social work, an emphasis on practical experience was what drew her into the program.

There is no “typical day at the office” she says of her internship this year with the Broome County Department of Social Services (DSS). What attracted her to pursuing a graduate degree in social work, she says, was “I wanted to help people face to face.”

For 16 hours a week, Kuhl was front and center assisting people sometimes facing the worst moments in their lives during her internship with Adult Protective Services at DSS. She spent the year assisting with home visits for adults with mental and physical impairments, as well as helping her DSS colleagues with emotionally challenging cases. These could range from removing children from problematic homes as well as conducting investigations of suspected abuse.

During the year-long internship, she’s also learned that while she won’t always be able to help people, understanding how to deal with that emotional toll is an important challenge and skill.

“Having this internship experience has given me the confidence I need to know that I’ll be able to do this job very well,” Kuhl says.