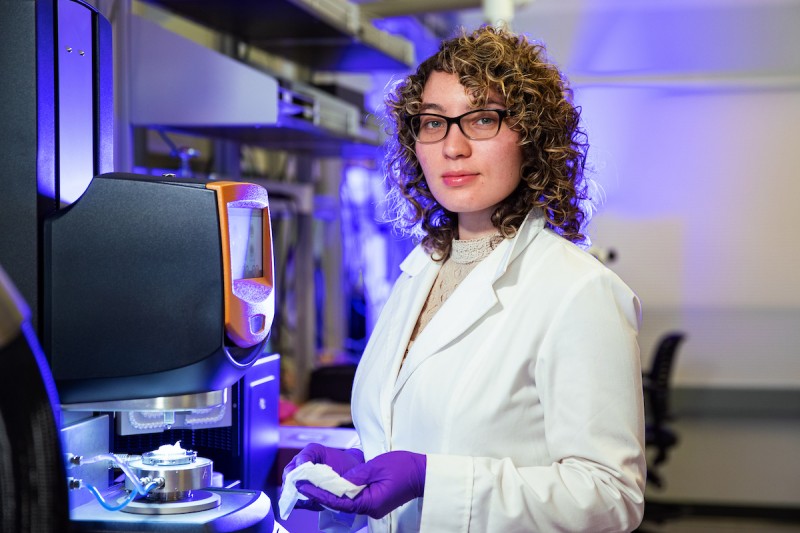 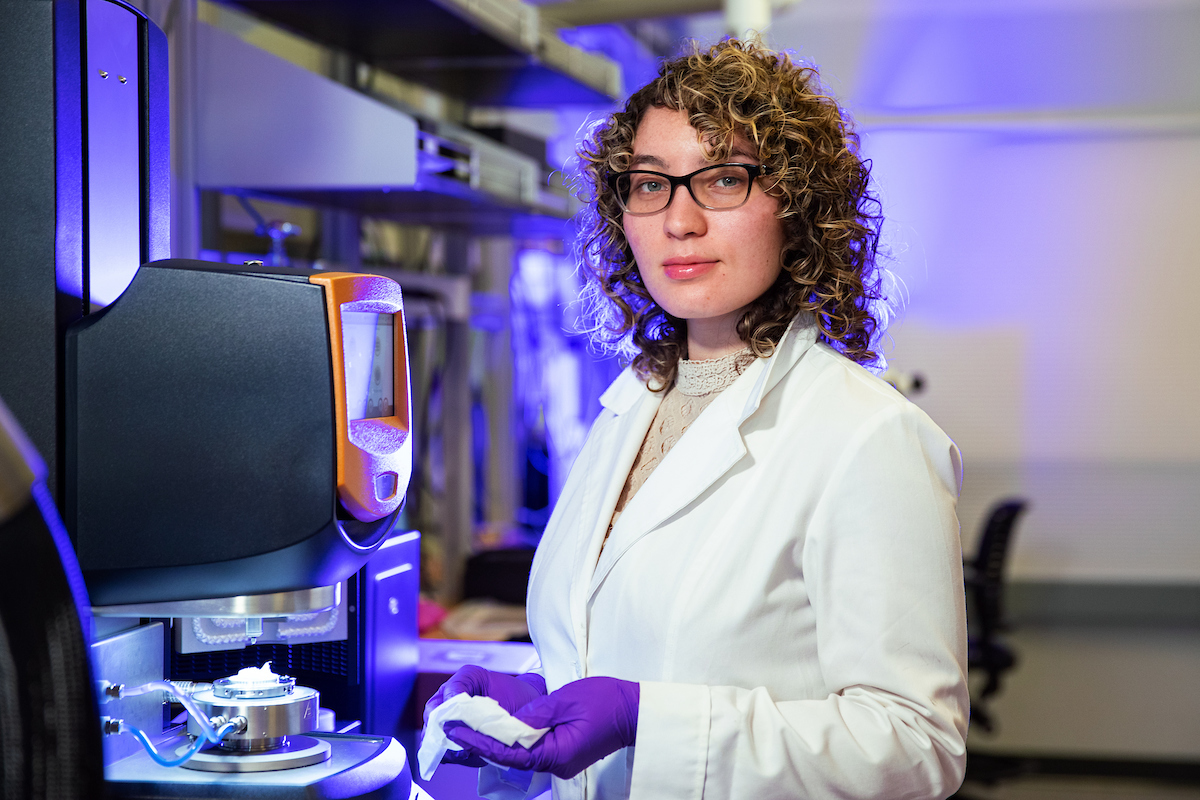 Students are paired with a mentor and work on research projects full time over two successive summers, continuing part time during the academic year in between. They receive an $18,200 stipend as well as $2,800 for supplies and travel expenses to the Beckman Symposium, where they will exhibit and discuss their research.

Thanks to an expansion of the program in recent years, two undergraduates were named the first Beckman Scholars from Binghamton University in 2022: Clara Rodriguez, a biomedical engineering major and Spanish minor from the Thomas J. Watson College of Engineering and Applied Science; and Shruti Venkatesh, a biological sciences major from the Harpur College of Arts and Sciences.

Working toward treatments for Parkinson’s disease

Venkatesh, a rising sophomore, grew up a stone’s throw away from campus in Vestal. She already knew about the opportunities offered at Binghamton, which made it her top college choice.

The sciences — particularly biology — first piqued her interest in middle school. In addition to expanding the frontiers of knowledge, research helps create real change in society — as well as personal development, due to its emphasis on collaboration and teamwork, she reflected. The Beckman Scholars program proved an ideal fit.

“It’s an opportunity for me to continue growing myself as an individual while fueling my fascination for STEM,” she said. “I enjoy being able to have a great hands-on experience in research as it’s a field I see myself pursuing long-term.”

Venkatesh’s mentor in the Beckman Scholars program is Professor of Psychology Christopher Bishop, director of the undergraduate integrative neuroscience program. She works 9-to-5 in his lab, which focuses on Parkinson’s disease. An increased understanding of the disease could lead to better treatments, Venkatesh said.

“As part of my study, I’m currently testing different variables in gait through Parkinsonian rodent models — essentially looking to compare and contrast differences in walking patterns with Parkinsonian rats,” she explained. “Many people who have Parkinson’s Disease struggle with walking, balance and muscle coordination, so by studying these symptoms in rats we can better understand the disease and create treatments that can help reduce these effects.”

While at Binghamton, Venkatesh plans to continue her work in Parkinson’s and other neurodegenerative disorders. Long-term, however, she is considering a focus on epidemiology or infectious disease, either as a physician or a researcher, although the future is open.

Some of her peers may not realize the research opportunities available at Binghamton, including the Beckman scholarship, she said. While research involves a time commitment, the rewards are considerable.

“It’s been truly rewarding being part of a group of like-minded students that works toward creating solutions for public health issues,” she said. “Going forward, I am excited to continue my research through the Beckman Scholars program, and by sharing my experience I really hope to encourage students to explore and take part in Binghamton’s STEM and research opportunities.”

A new tool for crime-solving

Rodriguez, from Hopewell Junction, N.Y., is the first in her family to pursue higher education, earning an Associate in Engineering Science degree at Dutchess Community College before coming to Binghamton last fall.

As part of the inaugural cohort for the Watson College Scholars Program — which aids economically disadvantaged undergraduates with priority for applicants from historically underrepresented backgrounds — she is receiving extra support both academically and professionally.

For her Beckman Scholars project, Rodriguez is working with Associate Professor Guy German from the Biomedical Engineering Department as her mentor. She is continuing research she started in German’s lab this spring, which analyzes skin patterns on human hands and arms for potential forensic applications.

By taking photos over a period of months, the project tracks how much change happens to the back of our hands and wrists as well as the middle of our anterior forearms. If someone leaves prints of those locations at the scene of a crime, can prosecutors link perpetrators to their victims?

“I take these images and put it into a code that I helped make, and it analyzes the similarities between these regions,” she said. “We’re tracking changes over time to see how long we can use a print to identify someone. It’s kind of like fingerprinting, but we don’t always have fingerprints available, so what if someone leaves a print of the back of their hand, like they slammed against something? If we can identify someone with that, that would be useful.”

Rodriguez said she is challenging herself by learning how to program the pattern recognition software, which is something she has never done before.

“Our first hurdle is: How accurate can we make this code? Can it actually track these similarities and recognize it’s the same thing, just moved a little bit over?” she said. “We’ve been having progress with that — we’re still working on fine-tuning it, but it’s looking optimistic so far.”

The Beckman Scholars program requires 40 hours of research per week during summer and 10 hours a week during the spring and fall semesters, but Rodriguez doesn’t think she’ll have any problem exceeding those goals.

“I’m probably going to put in a lot more than that,” she said with a laugh. “I’m not one to mark the minutes. Time flies by when you’re having fun!”