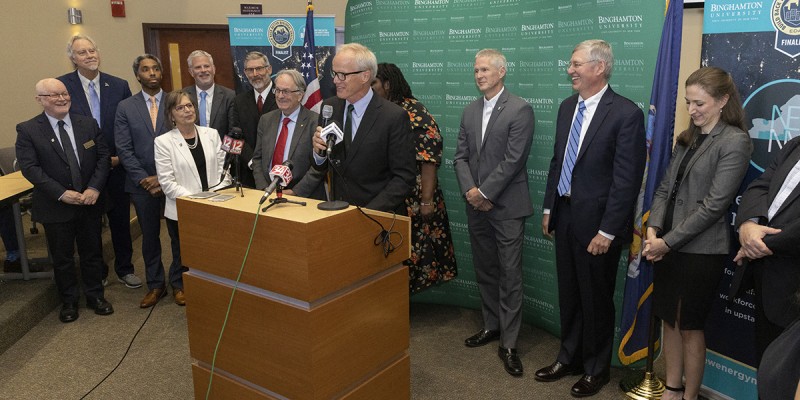 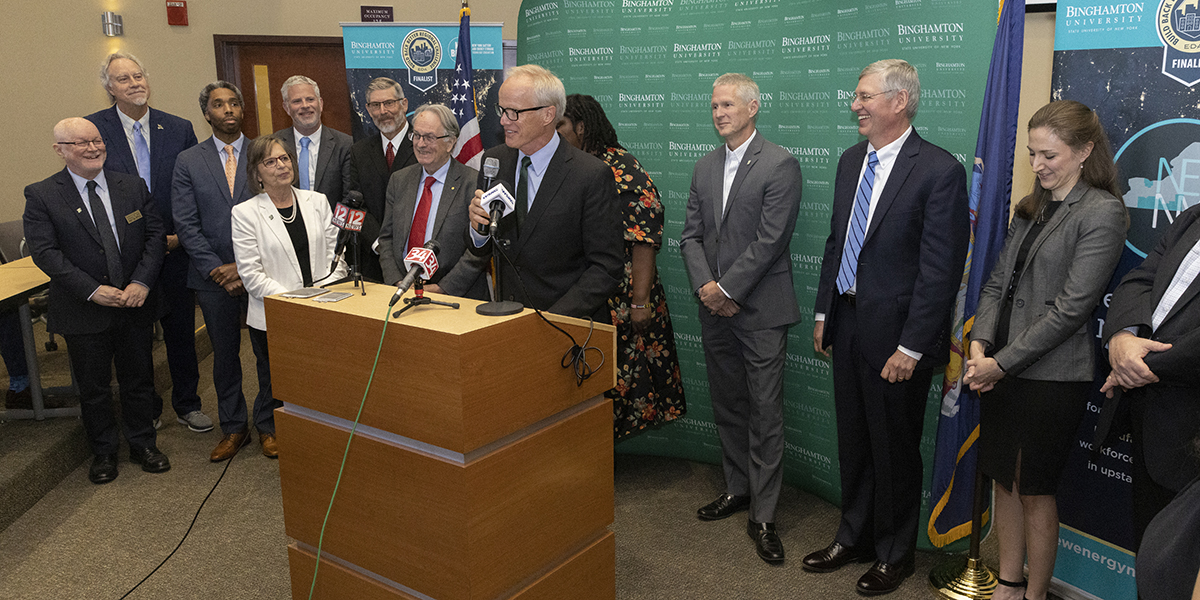 President Harvey Stenger, at the podium, is flanked by members of the New Energy New York coalition at the news conference held following President Joe Biden's announcement that the Binghamton University-led coalition's proposal was one of only 21 selected for American Rescue Act Build Back Better Challenge funding and will receive $63.7 million. Image Credit: Jonathan Cohen.
By Rachel Coker

Binghamton University’s New Energy New York project has been awarded more than $113 million to establish a hub for battery technology innovation in upstate New York. The U.S. Economic Development Administration announced Friday that the region would receive $63.7 million; the State of New York will support the project with an additional $50 million.

“I applaud every community that received the grant and those that applied. You’re the reason I’m so optimistic about the future. There are nothing but possibilities here,” said Biden.

“We designed this challenge to invest $1 billion to create jobs and opportunities for people in places where they live and where they have worked their entire careers, so they don’t have to leave. This is for them,” Biden said. “We estimate that these grants will result in 100,000 jobs created or saved in these communities. Together these projects will uplift underserved communities.”

“The New Energy New York team has worked hard on this project and without the leadership and guidance from Sen. Schumer from the beginning, we do not believe we would be here today,” said Binghamton University President Harvey Stenger. “Distinguished Professor and Nobel Prize-winner Stan Whittingham and our Associate Vice President Per Stromhaug had an idea they believed was crucial to our nation’s energy security. They, along with their team and NENY coalition members, have carried the concept to this point where we can stand here today as winners of the EDA’s Build Back Better Regional Challenge. With this win, and with the tremendous financial support from New York State Gov. Kathy Hochul, we are confident we can turn the Southern Tier and Finger Lakes regions of New York into the national hub for battery innovation, manufacturing and workforce development.”

U.S. Senate Majority Leader Charles E. Schumer advocated for the project, which had previously been announced as a finalist in the American Rescue Plan’s EDA Regional Challenge.

“I am proud to deliver this once-in-a-generation investment for Binghamton University to the Southern Tier, America’s home for the future of battery innovation, bringing manufacturing back from overseas, and training thousands of workers for good-paying jobs building an industry that will define this century,” Schumer said. “Broome County was once the global home to innovation, as the birthplace of IBM, flight simulation and virtual reality, and this project will breathe new life into that legacy to reinvigorate the Southern Tier economy and show the world what I have long known, that Binghamton workers can be the ones to rebuild our economy and take us into the future.”

“I want to congratulate Binghamton University on securing this important funding through the Biden administration’s Build Back Better initiative,” Hochul said. “Combined with our multi-million-dollar state investment, this funding will help Binghamton University to establish this state-of-the-art facility, advancing critical research and bolstering my administration’s commitment to renewable energy, creating a cleaner, more resilient future for all New Yorkers.”

Binghamton University will develop a battery technology and manufacturing center in an Opportunity Zone in Endicott. Additional projects will support the battery industry and its supply chain. The entire initiative is expected to have a $2 billion economic impact.

“This will enable North America to develop batteries rather than sending our technology overseas,” said Whittingham, an inventor of the lithium-ion battery who helped lead the proposal’s development. “We can’t have a supply chain dominated by any one part of the world. We can have batteries that have ‘Made in America’ stamped on them. I’m excited to spearhead the prototype facility in Endicott. We have built a coalition with industry partners so we have plans that are already informed by companies’ needs.”

Per Stromhaug, associate vice president for innovation and economic development at Binghamton University, will serve as regional economic competitiveness officer overseeing this project. He noted that the team consulted with more than 50 companies from every part of the battery supply chain in developing the proposal.

“Everyone we talked to has seen the importance of the project and been excited about being part of it,” Stromhaug said. “We are ready to have programs up and running quickly, with the Endicott pilot manufacturing facility open in a year or two. The program will be a magnet for the region and upstate New York, leading to high-paying jobs in development and manufacturing. It’s going to make an impact nationally.”

“The Build Back Better Regional Challenge will help fund an exciting pivot toward a clean energy future, while revitalizing and restoring a community back to its thriving manufacturing roots,” Raimondo said. “The New Energy New York coalition will leverage recent private investment in the state and Binghamton University’s research strengths — boosting U.S. global competitiveness and creating new jobs.”

The project includes regional workforce development required to support the storage manufacturing ecosystem, with dedicated programs to promote equity and participation of individuals from underrepresented and disadvantaged backgrounds.

“This funding from the EDA is a unique opportunity for comprehensive ecosystem building,” she said. “We will make a difference not only when it comes to technology development and manufacturing, but this will also benefit our region and its residents as a whole. We have already engaged community and local government and grassroots organizations in designing the projects. And we look forward to working with them to create jobs and workforce training programs, and to empowering our residents from various backgrounds to take advantage of these new opportunities.”

“Through the New Energy New York program, we will establish valuable new facilities, including a new Battery-NY Center, to support large-scale battery prototyping and manufacturing of new innovative ‘leapfrogging’ battery technologies,” Acker said. “We will also grow and develop the domestic supply chain and workforce needed to ensure that New York state and the nation are positioned to meet the growing domestic need for batteries. The New Energy New York project will be instrumental in driving job creation, economic growth and equity and justice from the rapidly expanding global battery industry.”

“This funding represents a significant investment in an innovative collaboration between the world-class researchers at Binghamton University and partners in the Southern Tier’s technology ecosystem,” U.S. Sen. Kirsten Gillibrand said. “As I wrote to Secretary Raimondo in March, this funding will strengthen domestic supply chains and reduce the outsourcing of battery production to international companies.”

Doreen M. Harris, president and CEO of NYSERDA, noted that energy storage plays a central role in the integration of more renewable energy onto the grid. “This historic investment will support the workers and domestic supply chain needed to keep the Empire State leading America’s critical energy storage industry,” she said, “and NYSERDA is proud to collaborate with the University and its partners to capitalize on the opportunity before us.”

Assemblymember Donna Lupardo said, “I would like to sincerely thank the NENY team and all our government partners for bringing this project to fruition. This award will be a game-changer for the University, our local economy and for our clean energy future. This is exactly what we hoped would happen when the Innovative Technologies Complex was first proposed many years ago.”

Noting that the Build Back Better application was one of the most difficult and time-consuming applications he had ever seen, Broome County Executive Jason Garner said that the stars have aligned. “We know how to work together as a community to get the things that we need. This amazing team got this done and it’s going to change Broome County. This is probably one of the most impactful things that have happened here.”

Shailesh Upreti, CEO of C4V and chairman for the iM3NY Gigafactory in Endicott, welcomed the news. “The New Energy New York coalition will catalyze all our investment so far in the state toward domestic manufacturing and complement Binghamton University’s cutting-edge research capabilities to boost American competitiveness in the battery supply chain and help create new green jobs,” he said.