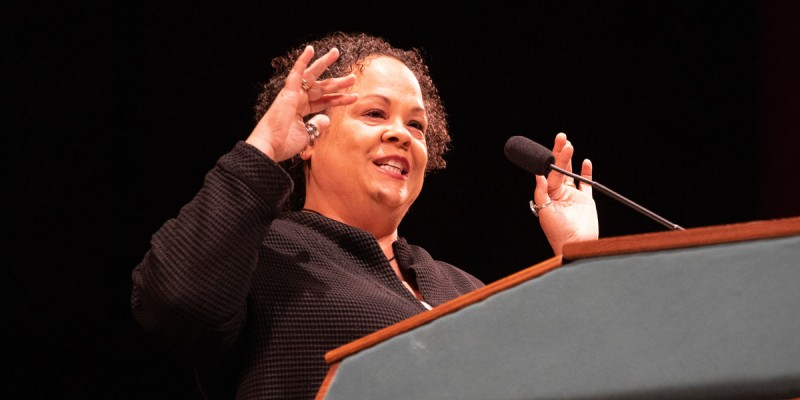 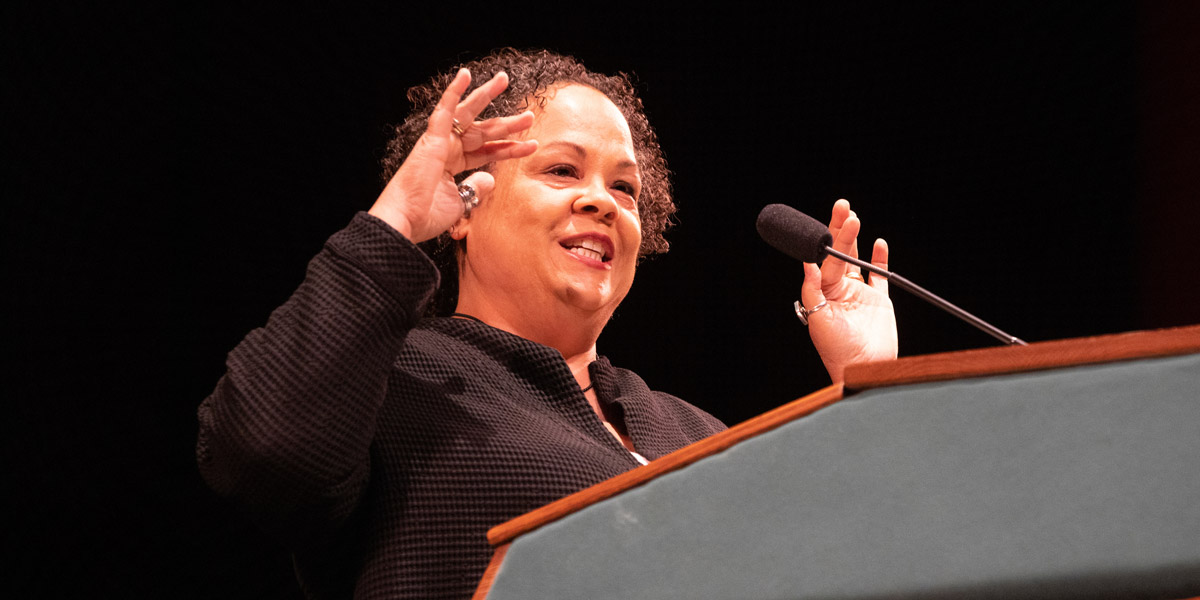 Binghamton University welcomed back New York Times best-selling author Julie Lythcott-Haims for a second time as the keynote speaker during Family Weekend. Over 1,700 copies of Lythcott-Haims’s book, How to Raise an Adult, were distributed to Binghamton families during Orientation this summer, and her keynote focused on the book’s strategies for raising young adults to be self-sufficient, resilient and successful.

“The book offers supportive messages, encouraging parents to give their students space to become more independent and confident in their own abilities — and benefit from the growth this brings,” said Cindy Cowden, chair of the B-Healthy Steering Committee, which sponsored Lythcott-Haims’s visit. “By allowing young adults to make their own choices, encounter challenges and opportunities, and yes, occasionally fail, parents can help their students build resilience and a sense of responsibility, preparing them for life beyond the classroom.”

Lythcott-Haims also authored Your Turn: How to be an Adult, a guide to being an adult in the 21st century, and Real American: A Memoir, detailing her experience as a Black woman in America.

Following her address at the Family Weekend Welcome, Lythcott-Haims hosted a book signing and discussion in the University’s Multicultural Resource Center. The discussion focused more on her personal struggle through young adulthood to learn to love herself as a biracial Black woman, but the themes of resiliency and personal growth were consistent with her earlier words addressing parents and families.

Despite a growing crowd of parents and students, Lythcott-Haims took time to go around the room and ask people to introduce themselves and finish the sentence “to know me is to know that…” By the end of the discussion, she had memorized each person’s name.

Lythcott-Haims’s genuine expression of care for those around her is obvious. Her whole career has revolved around helping people and using her own life experiences to help others on their paths to self-love and success. As she explained it, she wanted to make space for everyone in the room and establish mutual respect.

“We all need to get a whole lot better at showing others that they matter,” Lythcott-Haims said.

While she knows how to show others that they matter, she admitted that she has faced immense personal struggle in showing herself that she matters, a topic she explored through Real American: A Memoir.

The only Black student in her Wisconsin high school, she was successful — she was the student body president, maintained high grades and had plenty of friends — but not everyone was pleased to see her succeed.

On her 17th birthday, a student wrote a racial slur over a birthday sign on Lythcott-Haims’ locker. She was too ashamed to tell anyone, and kept quiet about the incident until she was 44 years old, working on her PhD, when she wrote about it for a poem in an English class.

After becoming the dean of freshmen and undergraduate advising at Stanford University, Lythcott-Haims still felt like she had to prove her worth as a young woman and as a Black woman, she said. She eventually realized that the constant struggle instilled in her a hatred of being Black.

Unlearning that hatred and embracing herself and her culture fully took time, but she raised her two children with the self-love that she wished she fostered for herself. That was what her discussion was all about — finding yourself, loving yourself and finishing your journey.

“Nobody can help you love yourself,” she said.

Everyone deserves to be cherished, she explained, but what matters most is that they learn to cherish themselves, and this requires a personal journey of growing, learning and failing — a journey of self-growth that, for many, starts as a young adult in college. She’s a firm believer in “putting in the work” and says that, if people do that, then they’ll belong everywhere, and that’s a key factor in finding success as an adult.