Company provides a taste of the rainbow, one cookie at a time 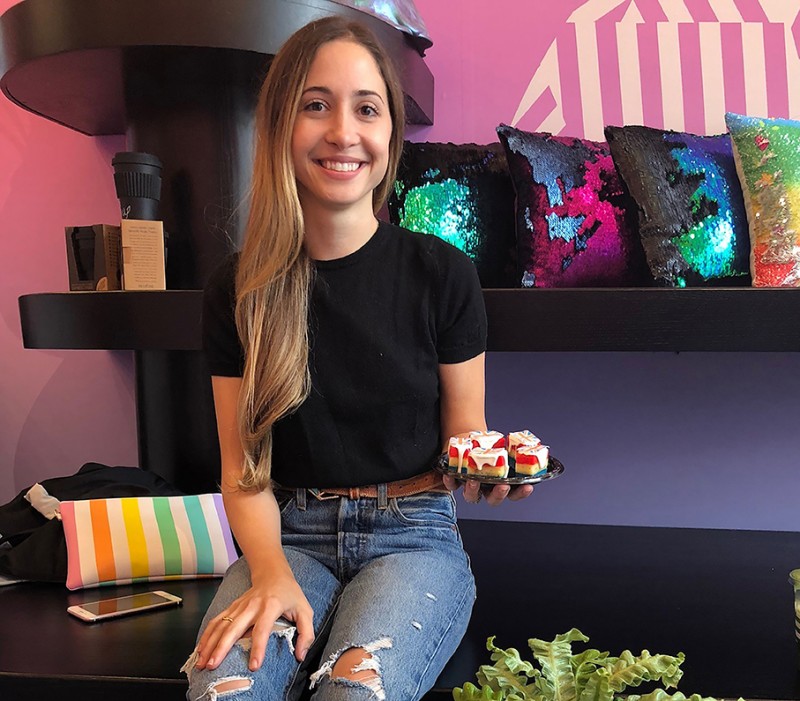 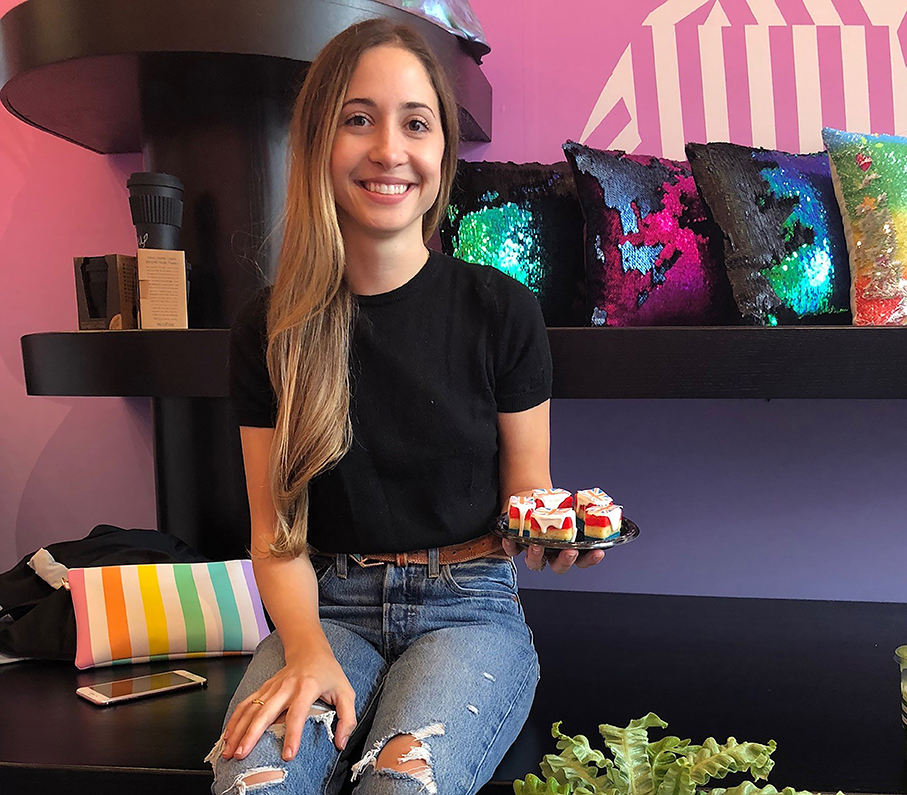 As a Binghamton University student, Samantha Zola ’11 did plenty of baking for friends and roommates from her Court Street kitchen in Binghamton.

“I used it as a way to procrastinate from studying,” she recalls. “My friends were encouraging about my baking and said I had something special. It made me realize that I could take the skills I gained at Binghamton and see what I could do in the baking world.”

A decade later, Zola is making a name for herself in the food industry as the owner and operator of Zola Bakes, a Long Island-based bakery that specializes in placing a modern-day twist on rainbow cookies.

The rainbow cookie has been a New York City specialty since its early 20th-century origins in Italian-American bakeries. The cookie, which looks like a dense, bite-sized, three-layered cake, has historically featured the colors of the Italian flag: red, green and white. Some may know it as a “Neapolitan cookie” or a “Venetian cookie.”

Zola brings the cookie into the 21st century by using filling flavors such as raspberry, apricot, hazelnut and chocolate hazelnut spread (Nutella), while also adding chocolate drizzle and edible glitter in products like cookie brownies, cookie cakes and regular rainbow cookies. The goodies can be customized by color for special events and can be shipped anywhere in the United States.

The recipe for success

Even though Zola has baked all of her life, she admits that rainbow cookies were never her favorite on the tray.

“I loved the way they looked, but I wasn’t the biggest fan of how they tasted,” she says. “But they became one of the things I baked often, and I discovered that making them fresh was so much better than the ones I got in the deli.”

Zola’s favorite rainbow cookie to eat: Nutella. “You don’t need to be a Nutella lover to love the Nutella [rainbow] cookie. It nicely complements the cake-cookie part.”

Most popular cookie with customers: Newcomers prefer Nutella, while older customers go for raspberry or apricot. “They find us through social media or our website. Instagram helped the business take off by promoting our products and letting people see these beautifully colored treats.” (Follow @Zola_Bakes on Instagram)

Zola didn’t have baking on her mind, though, when she began at Binghamton University. Coming upstate was an easy decision, as her parents — Jeffrey Zola ’80 and Susan Kosoff ’80 — met at Binghamton as students.

“It was the best choice for me,” she says. “I majored in human development. I was interested in psychology, sociology and learning about different demographics. Human development seemed like the right fit.”

Those close to Zola, such as future husband Jesse Charnoff ’10 and friend Shira Schwartz ’11, knew back then that she had the talent and tenacity to make it big in baking.

“Living with Sam came with the huge perk of her baking all the time,” Schwartz says. “She was always creating something — and I was happy to reap the benefits. Sam was already experimenting with rainbow cookies back then, so I got to try all the early prototypes as she started perfecting the recipe. Everything Sam baked was amazing, but she kept challenging herself, saying: ‘I can make it better.’ And she always did.”

After graduation, Zola pursued her dream and headed for training at the French Pastry School in Chicago (the only major culinary arts school in North America dedicated to baking and pastry) and then became a baker in the production kitchen at Épicerie Boulud in New York City. In fall 2012, she became head baker at the renowned Magnolia Bakery in Manhattan, eventually rising to the general manager position.

“I learned the ins and outs of a bakery and became intrigued about what goes into running a bakery,” she says.

The lessons became beneficial when she left Magnolia to move with Charnoff to Miami Beach for his medical residency. She soon began baking rainbow cookies out of their apartment.

“They reminded me of home — and I was a little bit homesick,” she says. “When I made them for other New York City transplants, they told me they were the best rainbow cookies they ever had. They couldn’t find rainbow cookies in Florida.”

Word of mouth led to customers outside of the Sunshine State asking for the cookies. Zola Bakes was born.

“I saw an opportunity to introduce rainbow cookies to other people in other states who really didn’t know what they were,” she says.

Zola and Charnoff relocated Zola Bakes to Long Island in 2019, working out of a production kitchen in Central Islip. The company’s products were soon featured in places such as Good Morning America, the Food Network and New York City-based media such as NY1 TV and FOX5NY TV.

A three-minute televised segment on CBS Sunday Morning in 2020 about rainbow cookies was particularly beneficial for the company, Zola says.

“Our website went bonkers when that aired!” says Zola, who was interviewed and made cookies during the segment. “We were as prepared as can be, but it was just me [working] at the time. It helped our success.”

Also helping in the Zola Bakes success was something that hurt other businesses: the COVID pandemic. The company saw a spike in sales, as mail-order rainbow cookies were just one way to bridge the social-distance gap.

“Everyone was sending boxes when they couldn’t get together for birthdays,” Zola says. “Or they would send get-well boxes. Our cookies were a way to brighten someone else’s day.”

Zola estimates that about 4,400 cookies are baked each day in the kitchen. It’s important, she says, to have lots of cookies in stock, as more than 500 are sold and shipped per day (and even more around the holidays).

In summer 2022, Zola (who has two children: Nellie, 2, and Mack, born July 31) decided to bring on some help, hiring a second baker. She also expanded the Binghamton connection by adding Schwartz, her longtime friend, as director of sales and operations.

“It feels incredible!” Schwartz says about joining the Zola Bakes team. “To see your best friend succeeding in something that started as a dream is just amazing.”

Schwartz says she has learned so much from Zola’s talents and work ethic.

“For so many years, it was just Sam taking orders, baking and shipping — she did it all,” Schwartz says. “She has taught me to trust yourself, surround yourself with people you can trust and don’t let anyone tell you that you can’t do something. ... I admire how Sam approaches every day with a smile on her face and literally sees the rainbow in every situation. No matter what storm comes our way, the rainbow will be there at the end.”

As for the future, Zola is hinting at the reinvention of another New York City deli cookie by the end of the year: She is planning a twist on the black-and-white cookie (also known as a half-moon cookie). Zola also wants to stay in e-commerce (“Brick-and-mortar is such a different beast,” she says) and continue educating the public on what a rainbow cookie is.

“I want to be the ‘it’ brand for rainbow cookies,” she says. “I want the whole world to know what rainbow cookies are and experience what a quality rainbow cookie tastes like instead of what you get in a supermarket or a deli. I think they are beautiful and make a great gift.”