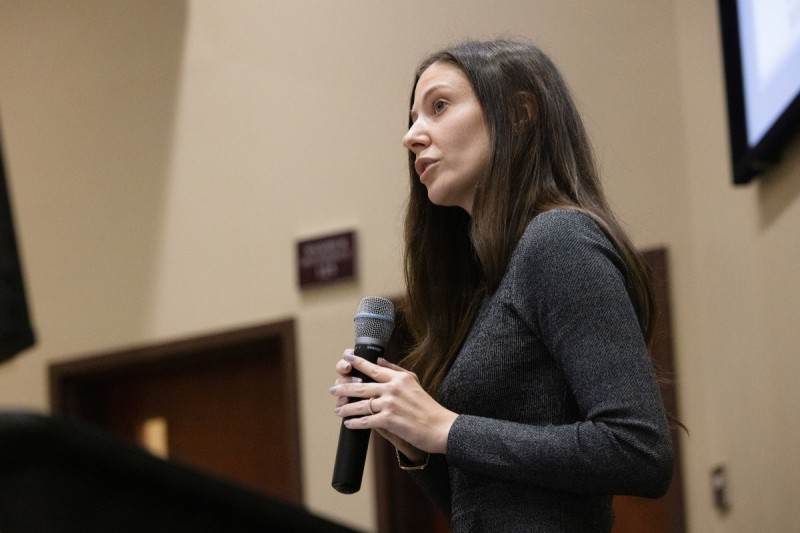 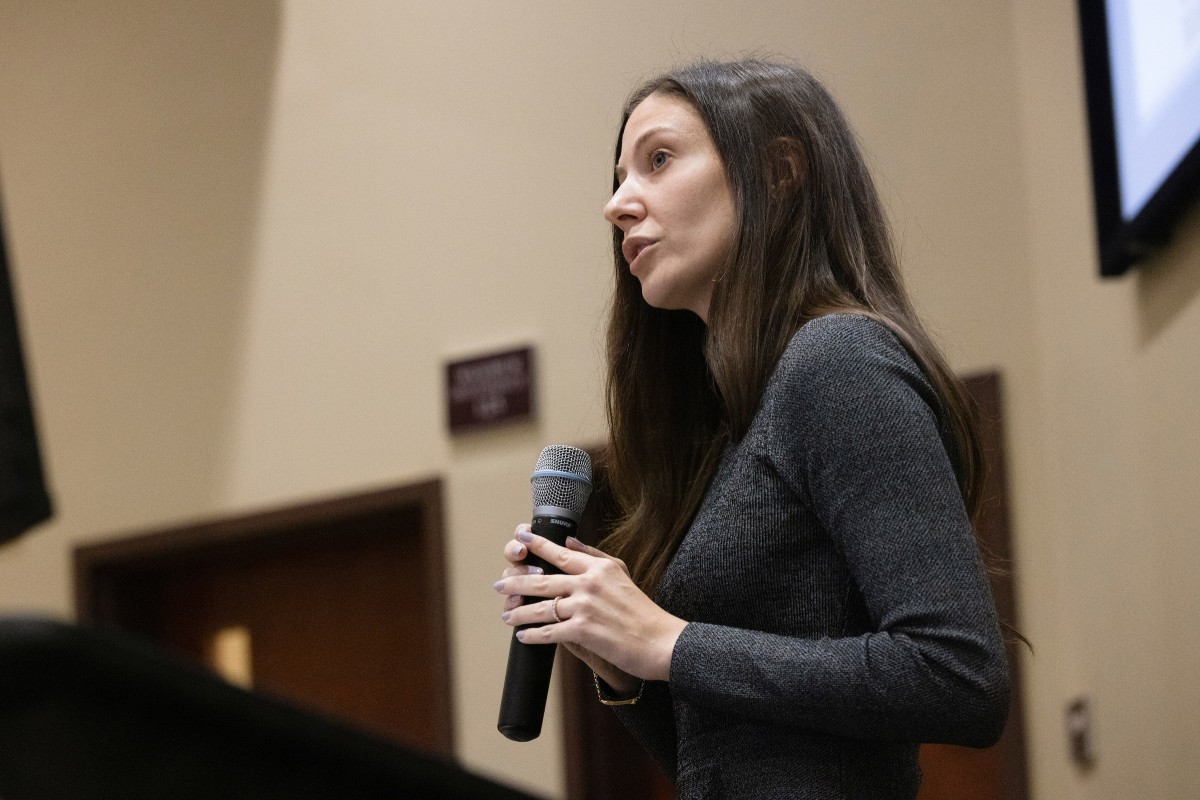 Binghamton University alumna Moira Penza '05, who as a federal prosecutor took down the NXIVM Sex Cult, was the featured speaker of the Bonzani Memorial Law Lecture that took place at Symposium Hall at the Center of Excellence at the Innovative Technologies Complex, Nov. 1, 2022. Image Credit: Jonathan Cohen.
By Jillian McCarthy ’24

During her lecture, Penza focused on how she pieced together the intricate puzzle behind the case, and her investment in the safety and protection of vulnerable people against sexual violence.

An English and history major, she credited Binghamton University with helping lay the foundation for her later career. She was ambitious from the start, serving as a Judicial Review board member and earning her stripes as a member of the speech and debate team on campus.

“Binghamton prepared me to succeed when measured against the best of the best and to do so with courage, kindness, integrity and a commitment to service,” Penza said.

As a trial attorney, Penza’s primary goal is to form a narrative that is simple enough for the jury to understand and compelling enough to help them decide, she said. In her talk, she detailed her methodology behind sorting through the evidence against Raniere, who was sentenced to 120 years in prison. At one point, investigators discovered 12 terabytes of electronic information, the equivalent of 12 library floors worth of data, she said.

“I wasn’t making a documentary. My job was first and foremost proving the crimes that we had charged Raniere with,” Penza said. “What you have to do when you are putting together a trial is really engage in some editing.”

Penza’s approach from the beginning of this case was to treat it as sensitively as possible, she explained. The goal was to ensure that all evidence would be preserved for the trial, and Penza wanted to make sure of one thing in particular: Raniere would be put away for life. When publications began reporting on NXIVM, Raniere fled to Mexico; Penza knew they had to act fast, she said.

“When you’re investigating a federal crime as a prosecutor, you typically want to keep your investigation covert for as long as possible, presuming no one is in immediate physical danger,” Penza said. “By then, we had enough evidence to charge some crimes, so we couldn’t wait any longer.”

This insight into criminal defense law was given with specific pieces of evidence that led to Raniere’s conviction and sentencing to 120 years in prison on charges that included racketeering and sex trafficking.

Accused of having his victims branded with his initials, Raniere’s own words were used against him during the trial, Penza pointed out. During the trial, Penza played a recording of Raniere on a phone call with actress and confidant Allison Mack, in which he detailed the exact ritual behind the brandings. Before hearing this clip, a victim had described Raniere’s actions with the exact same details in court.

“By the time we got to trial, he couldn’t maintain that lie anymore because we had so much evidence from his emails and recordings where his involvement was incontrovertible,” Penza said.

Penza talked about her experience not only to inspire and educate aspiring lawyers but also to foster a better comprehension of the complexities of cults and criminal organizations like NXIVM. She encouraged attendees to keep an eye out for the signs of indoctrination and lead with compassion when helping others.

“No one really joins a cult; people think they’re joining something that will help themselves or others,” Penza said. “When something doesn’t feel right to you, trust your instincts on that and make sure you are looking out for places where there is an intolerance for other ideas. That is where abuses happen.”