Keeping peace: How Augsburg remained an oasis of calm in an era of religious conflict 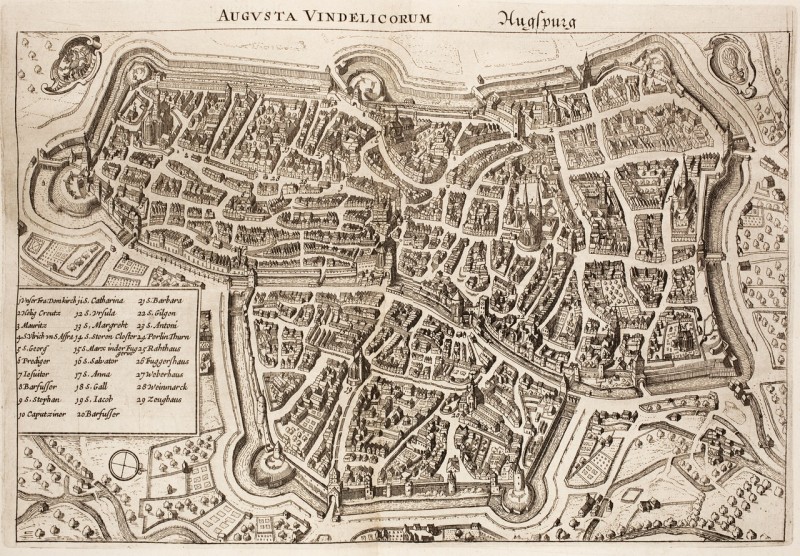 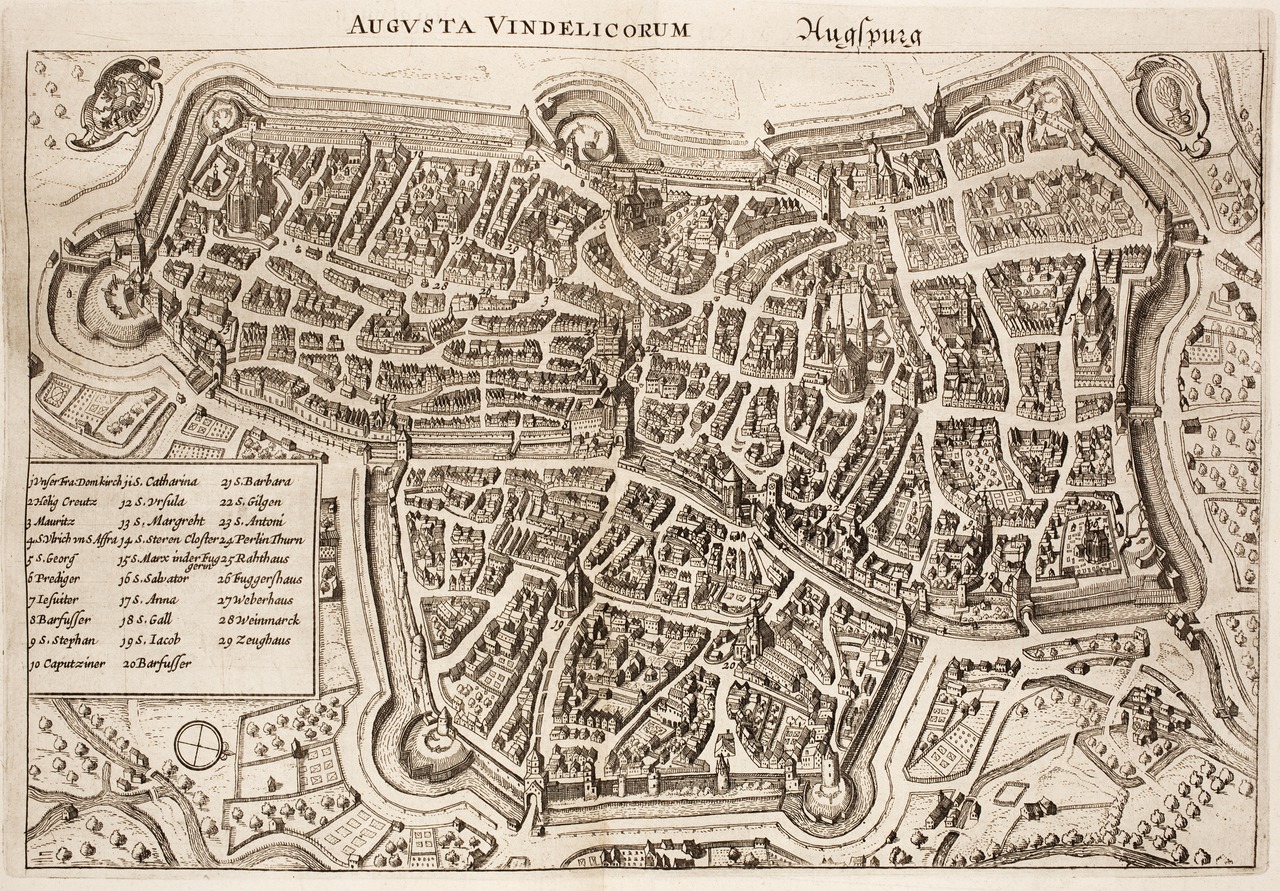 A lawyer, a priest and a businessman sat down at the dinner table together, chatting about a local controversy: Were the miracle-workers in the countryside legitimate? Or were they all frauds?

In the late 16th century, the independent City of Augsburg may have been one of the only places where such a conversation could occur. Much of Europe was wracked by religious warfare between Catholics and Protestants. And yet, these three men — the powerful Jesuit priest Peter Canisius, a Catholic scion of the wealthy Fugger family and the family’s Protestant lawyer — sat down together and openly debated the point, speaking with a disarming level of candor and frank disagreement. Remarkably, both Canisius and the lawyer recounted the conversation in their journals.

In the 16th century, Protestants and Catholics were engaged in bitter conflicts across much of Europe, but Augsburg, located in what is now southern Germany, remained largely immune. Binghamton University Assistant Professor of History Sean Dunwoody’s new book, Passionate Peace: Emotions and Religious Coexistence in Later Sixteenth-Century Augsburg, explores why.

To reconstruct citizens’ everyday lives and inner worlds, Dunwoody drew on a wide range of sources, from police records and municipal correspondence to private memoranda, internal administrative documents and more — such as the journals that preserved the conversation in the Fugger household. The key behind this coexistence: emotional practices that allowed the people of Augsburg to remain good citizens and neighbors, while still acting and living like good believers.

As an independent city, Augsburg had its own government with elected officials. Although small, it was an important place; much of the early banking system ran through the city, forging connections with the royal courts in Madrid, Paris and Vienna. Many international visitors passed through, including Michel de Montaigne, a French statesman who popularized the essay as a literary form.

“As Montaigne passed through Augsburg on his way to the spas of northern Italy, he was really quite shocked at what he had encountered there. Not only were there both Protestants and Catholics, but they resided in peace in the same space, with more than just a grudging acceptance,” Dunwoody explained. “He remarks on their positive cooperation with one another and noted how intermarriage was quite common.

Today, scholars can’t determine exactly how common religious intermarriage was in the city, but anecdotal evidence suggests that it was widespread. The couple who kept the inn where Montaigne stayed represented one such union between a Lutheran and a Catholic. According to both Montaigne’s observations and surviving marriage contracts, the religious education of children was left to whichever spouse cared more about it — an attitude not at all typical of the times.

During the period of Montaigne’s visit, his France homeland was in the middle of a decades-long series of civil and religious wars. Thousands of Protestants had been slaughtered in the St. Bartholomew’s Day Massacre in 1572, starting in Paris and sweeping across the country over the course of several weeks — one of the largest massacres in pre-modern history.

From the 1560s into the early 17th century, sectarian religious conflicts embroiled northwestern Europe and drew many participants from German-speaking lands, often to serve in Protestant armies. One such conflict took place in what is today the Netherlands, then ruled by the Catholic King of Spain; many residents of the Low Countries embraced Calvinism, turning a civil conflict into a religious one.

“The 16th century throughout much of Europe really is an age of religious conflict. It is the defining feature of the post-Reformation landscape,” Dunwoody said.

Augsburg’s practices of tolerance were motivated, in part, on shrewd pragmatism and a keen awareness of the importance of the city’s financial connections to both the ruling House of Habsburg, which was Catholic, and other provinces and cities.

Like people anywhere, the citizens of Augsburg had different personal identities: as citizens, craftsmen, family members and followers of a particular faith. The emotions people experienced depended, to a certain extent, on which part of their identity they engaged at any moment, which “emotional community” they felt themselves part of at any moment.

“On the one hand, you felt very strongly about who you were as a citizen of this free imperial city, with its proud traditions of self-administration. You might also feel very deeply about your identity as an artisan and as a member of a guild, which had its own centuries-long social and political traditions. And, of course, people were Christians,” Dunwoody said.

How did people of Augsburg prevent these identities from coming into conflict, as they did in so many other communities of the day? Dunwoody points to the political community’s emphasis on modesty as opposed to zeal, the latter a kind of emotionally fueled religious enthusiasm. People were expected to show deference and restraint not only in the way they related to each other, but even in the way they held their bodies in physical space.

“You were expected, as a citizen, to maintain this modesty, a kind of level-headedness and, above all, physical control over your own body and its emotional expressions,” he said. “It’s enshrined in the language of legislation and even in the iconography of city hall.”

This wasn’t always the case; the Catholics had been exiled from Augsburg after the Reformation. After they returned in the late 1540s, the way Protestant clergy spoke about strongly held faith commitments shifted; calls for enthusiastic and emotional demonstrations of faith faded from sermons, catechisms and popular treatises sold in the marketplace.

Instead, preachers and authors emphasized deference and trust. The same phenomenon happened among Catholics.

Backsliding and the aftermath

Augsburg’s peace lasted for more than a generation. Then, in the 1570s, new pastors and Jesuit priests came to town and renewed the emphasis on confrontational zeal and open displays of religious reverence, such as processions. In the early 1580s, a riot wracked the city.

Determined to return to peaceful coexistence, city leaders imposed strict political consequences on the ringleaders and oversaw the installation of new Protestant ministers, ensuring that these new preachers would maintain the city’s commitment to modest behavior.

“People hired to serve in the churches of Augsburg had to sign a contract where they said, ‘I know this is a place where Protestants and Catholics live together, and I promise I won’t do anything to stir people up,’” Dunwoody recounted.

Augsburg continued to enforce these practices of tolerance, even as most of the German-speaking lands descended into the Thirty Years War, the last of the early modern era’s religious wars, starting in 1618. As such, the city demonstrates how a strong commitment to a political system enabled the populace to overcome a pervasive atmosphere of religious tension and conflict — something we could perhaps learn from today.

“Even in the 1620s, in the midst of this raging religious war all around them, people of Catholic and Protestant backgrounds could intermarry, they could share a table together, they could stand as witnesses to one another in court,” Dunwoody said.