Is an active advocate for Climate Change Gender Action Plans 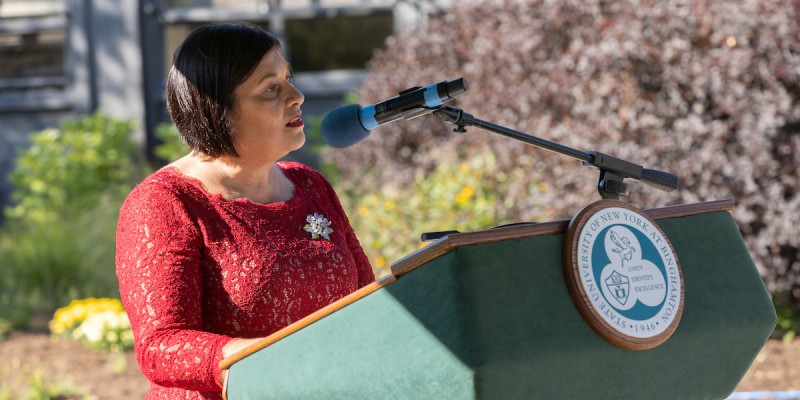 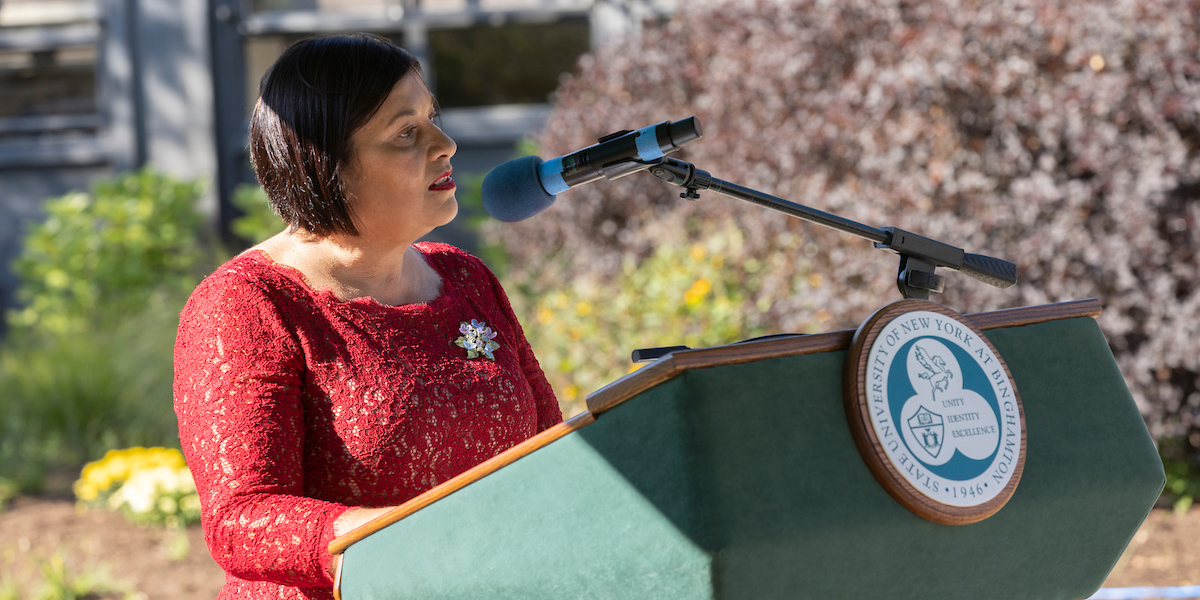 The Ellyn Uram Kaschak Institute for Social Justice for Women and Girls has as its mission to promote social justice and equity for women and girls, both domestically and around the globe.

“We’re trying to invest in new generations by fostering high-impact learning opportunities, bringing together researchers across campus and the world, and connecting our research expertise to communities locally and globally,” said institute Executive Director Lorena Aguilar.

A long-time advocate for climate change, Aguilar said one area the institute focuses on is the linkage between social justice and environmental sustainability, with a very important area of work being climate change,” she said.

Through the Kaschak Institute, two undergraduate students — Cynthia Tan, who has an interest in philosophy, politics and law, and Jason Ocampo, an undergraduate majoring in human development — researched who is doing what at Binghamton in relation to climate change and developed a Climate Change CV.

Opening lines of communication among researchers and colleagues will be key in helping Binghamton University become a leader on climate justice, said Kaschak Institute Executive Director Lorena Aguilar. “One idea I have in coming months is to gather together as many professionals, students, staff and faculty who are working on climate change so we work more strategically.”

For the past six months, Aguilar has been working to position the Kaschak Institute as a major player in the climate change arena through a number of initiatives.

“We’re involved in supporting governments in developing Climate Change Gender Action Plans (ccGAPs),” she said. “For example, we have just supported Guatemala in its ccGAP. Within this context, we brought two students along to have firsthand experience on how to transform international decisions into national policies and processes.”

For anthropology PhD student Ana Sanchez-Bachman, traveling to Guatemala was life-changing. “It was one thing to have a theoretical knowledge of climate policy, migration policy and the sorts of things governments have been doing to address these issues,” she said. “It was another thing entirely to speak with people who had been impacted personally by changing climate patterns, and who had intimate experience with migration.

“Learning from women, both in policy making circles and from grass roots activists, has profoundly changed how I approach my work,” Sanchez-Bachman added. “I do hope to continue working on topics around climate change, and my time in Guatemala has motivated me to do so in a way that might result in actionable information that can be more widely shared.”

At the policy level, the institute will continue to support the government of Guatemala. There is also the possibility of collaborating with other partners in countries like Rwanda. “This will allow different faculty, staff and students to engage in the development of ccGaps that are very comprehensive documents that require a lot of research and analysis,” Aguilar added.

The institute has also been placing itself in the major climate change decision-making bodies, including the United Nation Framework Convention on Climate Change (UNFCCC), known as COP 27, that was held in Egypt in November 2022.

Aguilar said that, for the first time, Binghamton University and the Kaschak Institute were present at the conference where significant decisions were being made. “We conducted a mentorship program for indigenous, youth, and new gender and climate change country negotiators. We also raised our voice to recognize gender equality, and women empowerment and the work women have been doing.”

These activities, Aguilar said, have already portrayed the institute as a place to go. “Little by little, we are establishing that we are a place to go to. And we’re looking in the future to becoming a center of excellence.”

As a result of the mentorship program held at COP 27, the institute has been asked to provide mentorship to support more than a dozen Global South negotiators who will attend the next conference. “They want to come to the institute to develop their capacity in understanding the linkages between gender equality and climate change,” Aguilar said. “

“Between June and July this year, we are planning to host a group of these negotiators, with an alliance of other organizations like UN Women and the International Union for Conservation of Nature (IUCN), so we can develop their capacity, understanding and knowledge of how to bring these topics into climate change negotiations,” Aguilar said.

In addition, the institute, in alliance with other members, is planning to cohost various workshops at COP 28, in the United Arab Emirates in November of this year, to help define the elements for next gender action plan (GAP) of the convention. “There have been two gender action plans so far, so we are going to be providing aid for the third gender action plan,” Aguilar said. “The presidency of COP 28 contacted us, so Binghamton and the institute can become one of their allies in this process. That is just one of the things that will happen this year because of the work we did at COP 27 last year.”

Yet another initiative the institute is planning is an upcoming Summit on Climate Change in Black Communities, in conjunction with the Dr. N. Joyce Payne Center for Social Justice, created by the Thurgood Marshall College Fund, and Binghamton’s Harriet Tubman Center for Freedom and Equity.

“It will be the first of its type and scale to unite a variety of public, private, academic and civil sectors across the African American community around the issue of climate change to serve as a foundation for ongoing collaborations and actions that will center Black voices and perspectives in this fight,” Aguilar said.

“Our idea is to convene leaders and policy makers and develop a comprehensive policy agenda and call to action related to climate change in African American communities,” she added. “Hopefully, we will become a leader in this area and it will allow us to create a platform for ongoing cross-sector collaboration and plans of action related to race and climate change following the summit.”

Finally, Aguilar said that the institute will this year become a leading organization for the United States’ launch of the 1 Million Women (1MW) campaign that was created in Australia with the single goal of getting 1 million women to pledge to take small steps in their daily lives to save energy, reduce waste, curb pollution and lead change.

“We want to shape the 1 Million Women campaign to empower students to act on climate change and make an impact,” Aguilar said. “This will allow us create and test it out to other universities and similar institutions across the United States. Hopefully, in April, the IMW CEO will come to campus sign an agreement between our institutions and launch the initiative.”

Binghamton University is dedicated to the advancement of social justice for all individuals and populations. To that end, a number of institutes and centers have been established to promote research, ideas, communication and critical discourse in areas including human rights; equality for women and girls; and global health, progressive education and well-being for marginalized populations.

Each of these institutes and centers has a specific focus, yet they all exist to raise awareness of issues of historical, systemic injustices, and to explore ways to rise above these injustices to the benefit of the world’s underrepresented.