Now this is pod racing!

35-member Binghamton Hyperloop team comes from across the Watson School, is only N.Y. team in competition 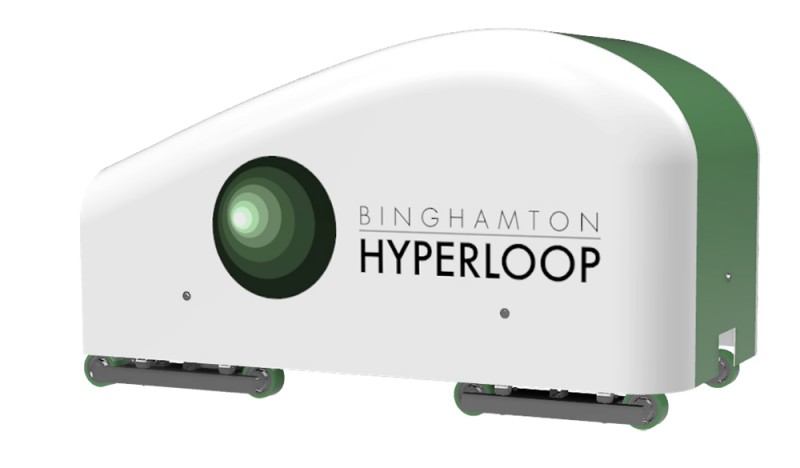 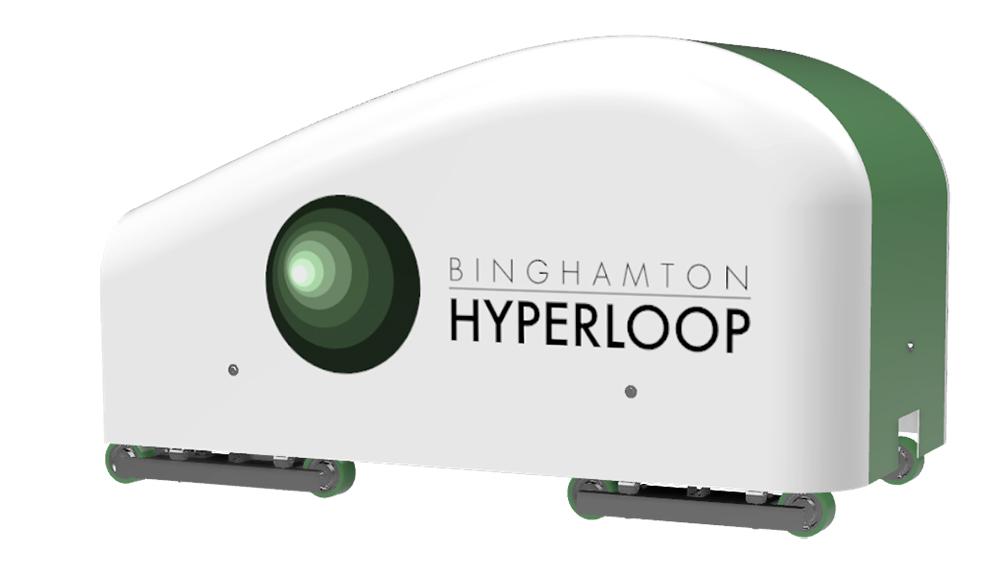 In a statement made after the event, the team said, “It’s been a long week (and year) but showing off all our hard work today made it worth it. We were blown away by the innovative designs and technology being produced by students just like us, from all over the world. Congrats to the Technical University of Munich’s WARR Hyperloop for reaching a top speed of over 200mph! We had a great time at the competition and look forward to making it back next year!”

From April 2017: A team of 35 Binghamton University student-engineers will race against 23 teams from around the world with an experimental pod that might be the future of human transportation.

Binghamton Hyperloop will race in the Hyperloop Pod Competition II hosted by the aerospace manufacturer Space Exploration Technologies Corporation (SpaceX) in August. The interdisciplinary team is the only State University of New York (SUNY) squad to qualify, and the only team from New York to reach this stage of the competition.

“I was elated,” says Project Manager Brian Parsons upon reading the qualifying email from SpaceX. “I could not be more proud to be part of a team of such highly motivated engineers. I hope that this formula of hard work, strong communication and unrelenting dedication to creating an excellent pod design continues to reward our team in August when we compete,” the senior mechanical engineering major says.

Hyperloop is a proposed human transport system in which passengers ride in cars called pods — similar to the pneumatic tubes at a bank drive-through — at, theoretically, up to 750 miles per hour. It was first proposed in 2012 by SpaceX Founder and CEO Elon Musk. Right now, SpaceX only has a test track at its headquarters in California.

To build interest in the concept, SpaceX started the Hyperloop Pod Competition in 2015. Collegiate teams all over the world design and build pods in hopes of getting to test their creations.

In the inaugural competition last academic year, two Binghamton teams were among the 115 international teams from an original field of more than 1,200 to attend a final design presentation conference at Texas A&M University in College Station. Neither was selected to test its design.

This time, the Binghamton team submitted a pod proposal in the fall that was judged on a variety of criteria including materials, dimensions and systems (i.e., braking). After a selection process, the team then presented its work to SpaceX officials directly via Skype in February. When SpaceX picked teams to attend the competition in August, Binghamton was one of the 24 finalists.

With 1,300 applicant teams this time, fewer than 2 percent of teams reach this level of competition. Binghamton will face teams from the University of Michigan, Purdue, the Colorado School of Mines, Arizona State and the Technical University of Munich among others.

“Binghamton University is competing against not only the best engineering schools in the United States, but in the whole world,” Parsons said. “This really put it into perspective just how successful our team was and gave everyone enormous pride to represent the Thomas J. Watson School of Engineering and Applied Science in such a competitive international competition.”

In the final competition, only one thing matters: speed without crashing.

The 509-pound Binghamton Hyperloop Pod is windowless and designed to fit an average adult male. It has a flat front that curves back to maintain stability at high velocities and help with quick deceleration. The pod uses an electromagnetic eddy-current system for braking.

The brake pads also provide lateral stabilization. If there is a power failure, a spring mechanism stops the pod.

“The team was thrilled to learn that the thousands of combined hours invested in this project on all sorts of different areas paid off,” Parsons says.

Overall, the team roster draws from across the Watson School. Three sub-teams are made up of mostly mechanical engineering majors, but also include electrical, industrial and computer engineering majors along with computer scientists. Students from the original Binghamton Hyperloop teams came back to join this project as well. Mechanical engineering research scientist Kirill Zaychik, lecturer Colin Selleck and Associate Professor Peter Huang are all faculty advisors on the project.

“[Having a large overall team] had a profound effect on the productivity, efficiency and effectiveness. The addition of several graduate students, including a couple from the prior year’s team, provided our team with increased support and knowledge,” says Parsons. “We are emboldened by this win to continue our hard work and place well in the competition.”