The young and the reckless

For adolescents, effects of alcohol can last a lifetime 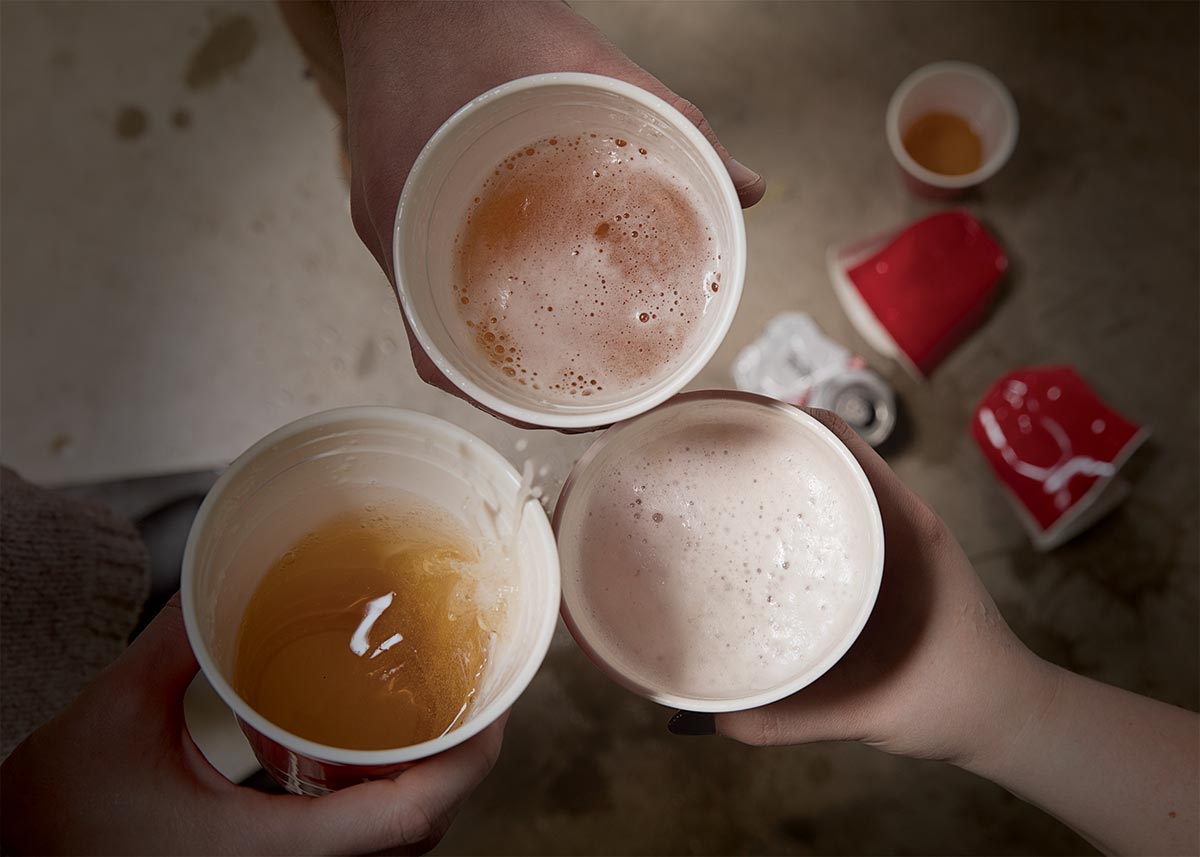 Teenagers are right: The world really does revolve around them. Because right now, their developing brains are a hot topic in neuroscience.

Linda Spear, distinguished professor of psychology at Binghamton University, helped spark that interest when she published a review titled “The Adolescent Brain and Age-Related Behavioral Manifestations” in the journal Neuroscience & Biobehavioral Reviews in 2000.

From that evolved a major finding that captured the attention of scientists and parents alike: Teenagers are less sensitive than adults to the cues that tell them to stop drinking. They are less likely to have trouble speaking, experience motor impairment and suffer a hangover. And that tolerance means they are more likely to drink a lethal amount of alcohol.

Spear’s paper was one of about 30 on the adolescent brain published in 2000. In 2010, there were close to 200. Also that year, Spear published a book, The Behavioral Neuroscience of Adolescence (W.W. Norton), and the National Institute on Alcohol Abuse and Alcoholism awarded a five-year, $8.5 million grant to fund the Developmental Exposure Alcohol Research Center (DEARC) at Binghamton, which she leads. DEARC is currently in its second five-year funding cycle.

Much of the research that has come out of the DEARC focuses on prenatal and adolescent alcohol exposure, and it reinforces the concept of adolescence as a unique developmental stage.

“We’ve been ignoring adolescents, assuming they’re immature adults and we’ll let them get into adulthood on their own,” Spear says. “We really haven’t said to adolescents, ‘This is a really specific period of time, this is what your brain is doing and you can help build your brain.’ It’s on them to make that decision, but they can’t make a good decision if they don’t know what the data show.”

In Spear’s lab, the adolescents are hanging out in a group, and they’re drinking.

They may be rats, but when Spear describes what’s going on in this study of drinking in social groups, it’s not hard to see it in human terms. “What we find is that male adolescents that are socially outgoing drink more in a social setting than they do when they’re by themselves. They seem to be drinking more for social facilitation. The ones that are not socially active don’t drink that much in social situations,” she says.

The Developmental Exposure Alcohol Research Center (DEARC) is a collaborative research venture dedicated to learning the effects of alcohol exposure throughout brain development — especially during prenatal and adolescent stages.

It is funded by the National Institute on Alcohol Abuse and Alcoholism (NIAAA) and currently supports research at Upstate Medical University and Binghamton University, with collaborations at the University of Maryland and University of Tennessee Health Science Center. There are 17 researchers; about a dozen are from Binghamton. Linda Spear is the director.

The Neurobiology of Adolescent Drinking in Adulthood (NADIA) is a consortium of neuroscientists from eight universities, including Binghamton, using cutting-edge and novel approaches to investigate potential long-term consequences of underage drinking. It is supported by the National Institutes of Health.

Females, on the other hand, drink more in a social setting if they are socially anxious than do females that are not.

“It’s the opposite of males,” Spear says. “Females drink to reduce social anxiety and males are drinking because the group is.”

The differences between the sexes don’t end there. Spear and her team have observed that repeated exposure to alcohol during adolescence results in long-lasting social anxiety in adulthood — but only in males. Now they are looking at why females are protected from this social anxiety.

“We’re looking at oxytocin, the so-called ‘love hormone,’ because females have a more active oxytocin system than males. We think that may protect them against the adolescent alcohol exposure effect,” Spear says.

Another sex difference is that drinking during adolescence can leave males vulnerable to chronic stress later on, according to a study published in 2016 in Brain Research by Spear and Binghamton research professor Elena Varlinskaya.

Rats were given alcohol every other day, starting from early to mid-adolescence. When the team looked at the same rats in adulthood, they found that males didn’t show hormonal stress adaptation, making them more vulnerable to chronic stress.

“Stress hormones are released when you get anxious or are in a stressful circumstance,” Spear says; they help you respond in an emergency. “The classic stress hormone is cortisol in humans; it’s corticosterone in rats. When you expose the animals to a stressor the first time, they show a large hormone stress response. However, this hormonal response normally adapts over time, such that less hormone is released following repeated exposure to a relatively mild stressor. But it’s bad to have elevated levels in the long term because they can have adverse effects on a lot of body systems. What we found is that following adolescent alcohol exposure, adults don’t show that hormonal stress adaptation, which suggests that they may be more vulnerable later to chronic stress.”

Last fall, in response to the enormous progress that has been made in adolescent brain research since the publication of her seminal paper, the editors of Neuroscience & Biobehavioral Reviews asked Spear to prepare a special issue highlighting current research.

She enlisted the help of former student Marisa Silveri, MA ’98, PhD ’00, now associate professor of psychiatry at Harvard Medical School and director of the Neurodevelopmental Laboratory on Addictions and Mental Health at McLean Hospital, to serve as co-editor, choosing and reviewing articles for inclusion.

Once a Student, Now a Collaborator

​Marisa Silveri, MA ’98, PhD ’00, joined Linda Spear’s lab in 1995, about the time Spear was turning her research focus from prenatal cocaine exposure to adolescents and alcohol.

Silveri wanted to understand the vulnerabilities of the adolescent brain, and Spear’s new alcohol research provided opportunities to do it in ways that aren’t ethically possible in humans.

“Linda’s lab is at the forefront of preclinical research on alcohol’s effects on the adolescent brain. My experience in her lab was an invaluable springboard for my career in human neuroimaging research,” says Silveri, associate professor of psychiatry at Harvard Medical School and director of the Neurodevelopmental Laboratory on Addictions and Mental Health at McLean Hospital. Her lab uses noninvasive magnetic resonance techniques to look at the brain and explore the neurobiological and neuropsychological consequences of substance abuse and the manifestation of addictions and psychiatric illness.

The use of imaging is cited as a contributing factor in the tenfold increase in the number of publications on adolescent brain development since 2000. So when Spear was asked to compile a special edition of Neuroscience & Biobehavioral Reviews (2016) in order to update significant developments in research since 2000, she naturally turned to Silveri for help.

The work was a great way to rekindle a collaborative relationship, says Silveri, who has published a dozen times with Spear. “It also offered a great opportunity for us, mentor and previous trainee, to exude our passion about the transdisciplinary approach to characterizing the adolescent brain.”

“There are 31 articles, and it reads like the who’s who of people doing adolescent research,” Spear says. “It’s awesome.”

Some articles focus on emerging areas, like how the gut microbiome (population of microbes) affects the adolescent brain. In others is the thread of an idea that says the flip side to adolescents being less sensitive to the aversive effects of drinking is that they are likely to be more sensitive to the rewarding effects of alcohol and, perhaps, of other drug and nondrug stimuli.

“I don’t know if it’s universally accepted, but more and more people are thinking that way and talking about it,” Spear says, noting that in the special edition, at least a handful of articles, on different topics, talked about reward sensitivity being greater in adolescence.

With all that science has learned about the adolescent brain, there’s still a lack of understanding by the owners of those brains.

“All this adolescent drinking really freaks me out,” Spear says. “I don’t think kids know that they’re building their own brains during adolescence.

“Addiction is a developmental disorder and much of that is laid down during adolescence. I don’t think we’re doing a good job educating adolescents that there are consequences and there are actions they can take charge of that can help them build the brain they’ll want in the future.”