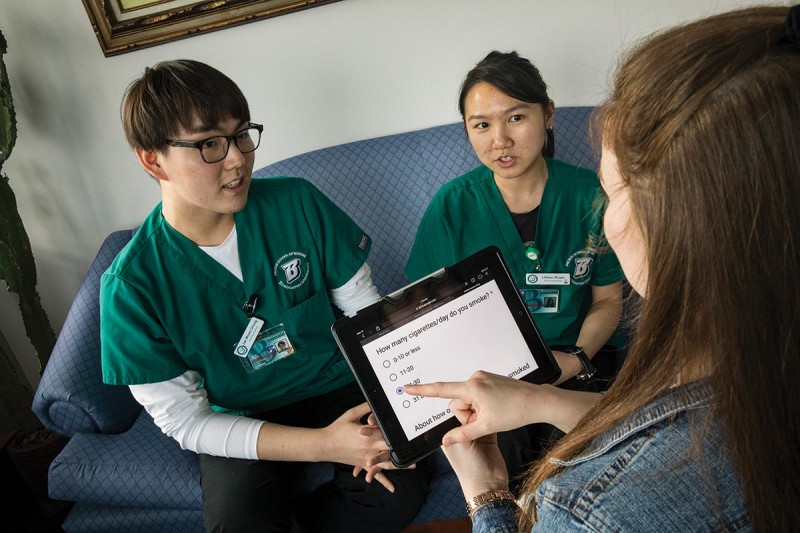 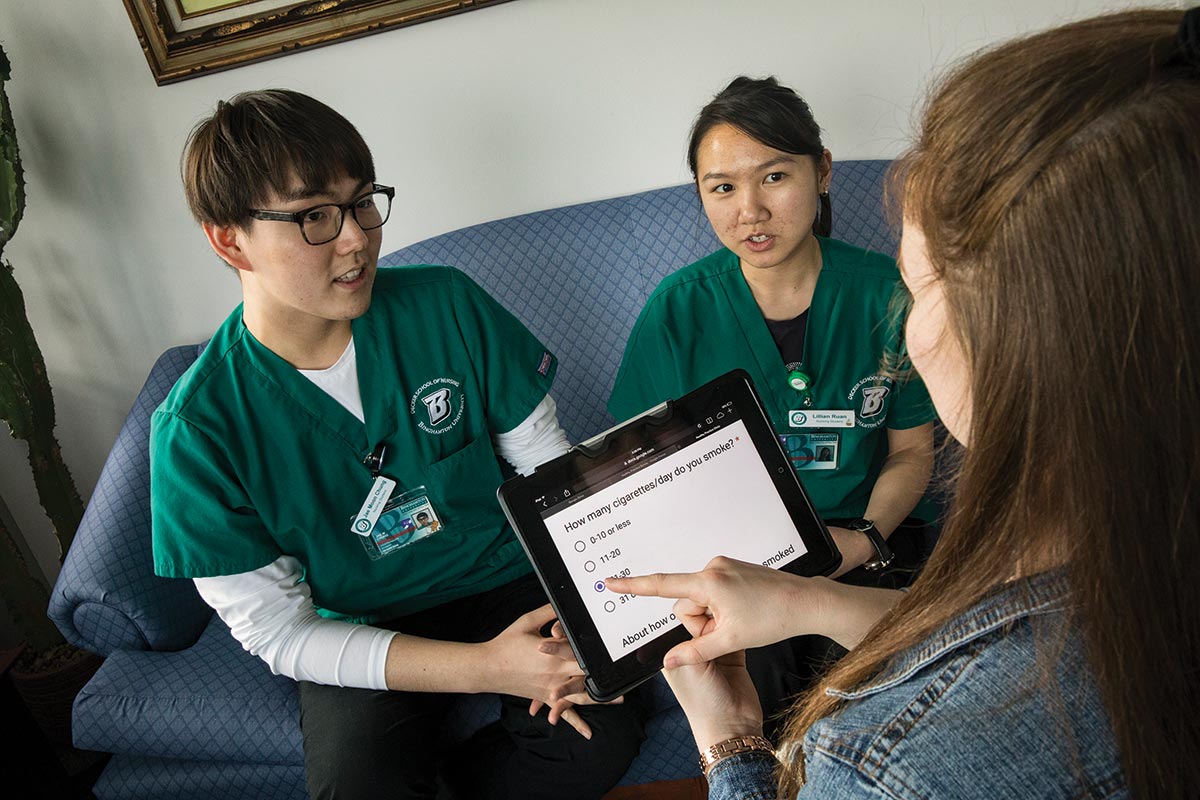 Nursing students Jae Moon Chung, left, and Lillian Ruan interview a mock patient as they prepare for the opening of a tobacco-use support clinic.
By Natalie Blando-George

​While opioid addiction dominates the headlines, more people in the United States are addicted to nicotine than to any other drug.

Two of the most notable effects of nicotine on the brain are increases in the levels of dopamine and epinephrine (adrenaline); the smoker feels less anxious and more alert.

“Nicotine creates changes in the brain’s neurotransmitters, and the more you use nicotine, the more changes occur,” says Rosemary Collier ’09, MS ’13, PhD ’16, clinical assistant professor of nursing at Binghamton University. The number of smokers aged 18 to 24 is estimated to be as high as 30 percent, and this is especially troubling, she adds, “because their brains are not fully formed, and brain development can be affected by nicotine.”

Most smokers who attempt to quit will relapse within a week, according to the Centers for Disease Control and Prevention (CDC). It can take about 10 tries to achieve success.

“I don’t think there’s any single, good way to break a nicotine addiction,” says Binghamton Professor Gary James. “Cold turkey is really difficult, but it can be done, especially if you have incentive to stop.”

The program’s community outreach efforts primarily focus on pregnant smokers and originated in 1998 with Britton’s early work testing a nurse-managed perinatal cessation program. Sprague built upon this work and recently created a video that is delivered to pregnant women during their first prenatal visit to a healthcare provider.

Being tested in healthcare clinics in Binghamton and Johnson City, N.Y., and in Scranton and Wellsboro, Pa., the educational video is paired with a self-administered tobacco-use survey; both are delivered via iPad. The video is narrated by children and includes stories from real nurses and pregnant women who smoked.

Sprague says having the women complete the survey and watch the video without a healthcare provider in the room results in more honest responses.

“We learned that the women weren’t telling the providers they smoked because they didn’t want a lecture,” Sprague says. “They felt they were being judged, and we had to remove judgment because we need accurate information so we can develop the most effective intervention for each individual.”

In addition, the video relieves healthcare providers from the burden of having to deliver a “no smoking while pregnant” message that could strain provider-patient relationships.

Sprague will conclude testing this year and hopes the video and survey will one day be in use in healthcare clinics around the country.

The interdisciplinary nature of ITURP is especially attractive to James, who is on the faculty in the nursing, biomedical engineering and anthropology departments. “Nicotine addiction shouldn’t be studied just in nursing, or medicine,” he says. “You’ve got to be in the ‘cracks’ between disciplines, where you take some things from here and some things from there. I think that’s where the answers are going to be.”