Pablo de Greiff — U.N. special rapporteur on the promotion of truth, justice, reparation and guarantees of non-recurrence — was the featured speaker at the celebration of the launch of the Institute for Genocide and Mass Atrocity Prevention. Image Credit: Jonathan Heisler. 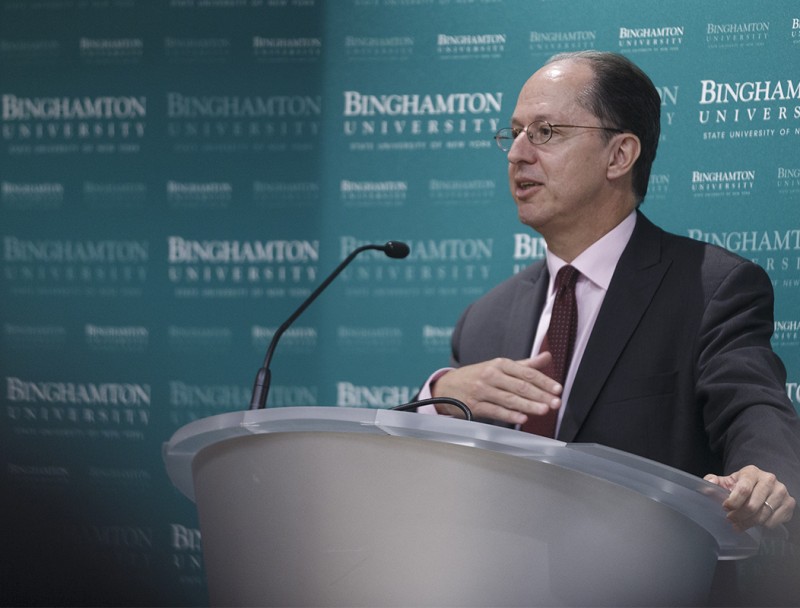 Pablo de Greiff — U.N. special rapporteur on the promotion of truth, justice, reparation and guarantees of non-recurrence — was the featured speaker at the celebration of the launch of the Institute for Genocide and Mass Atrocity Prevention. Photography: Jonathan Heisler.
By My-Ly Nguyen Sperry ’00, MBA ’02

Binghamton University is on its way to making a concrete difference in the prevention of genocide and mass atrocity, according to a special rapporteur of the United Nations.

The University celebrated the launch of its Institute for Genocide and Mass Atrocity Prevention (I-GMAP) Thursday, April 20, with presentations and a reception at the SUNY Global Center in New York City.

Pablo de Greiff — United Nations special rapporteur on the promotion of truth, justice, reparation and guarantees of non-recurrence — was the featured speaker at the event, attended by I-GMAP supporters, U.N. officials, alumni and other invited guests.

“This is tremendously important. This is something that can have a great deal of impact on the lives of people who need it the most,” de Greiff said of the new I-GMAP. “I am absolutely delighted by this, very impressed by the institute and think it can absolutely make a difference.”

I-GMAP was established thanks to a generous gift from an anonymous donor that was facilitated by Owen Pell ’80, LLD ’11, a partner with international law firm White & Case LLP and chair of the board of the Auschwitz Institute for Peace and Reconciliation.

“Owen has been absolutely instrumental in creating this institute. It was his brainchild,” Provost Donald Nieman told the audience at the I-GMAP kickoff event.

It takes the full weight of an entire university and its many departments to address genocide and its prevention, not just a single humanities program or a social sciences program, Pell said.

“Binghamton is uniquely positioned to become a leader in scholarship, research and practice in this area,” Nieman said.

I-GMAP will bring together cutting-edge academic research and the experience and insight of practitioners to transform understanding and disrupt processes that lead to genocide and mass atrocities. It will leverage the University’s expertise in social sciences and the humanities, and its path-breaking research in global affairs.

In addition to its commitment to and emphasis on prevention, I-GMAP will employ multiple approaches to bridge the gap between scholars and practitioners and inform real-world application of the latest scholarship in this field, said the institute’s co-directors, Max Pensky, professor of philosophy, and Nadia Rubaii ’85, MA ’87, PhD ’91, associate professor of public administration.

Too often “we are intervening far too late,” de Greiff said. That is why prevention and broadening the scope of prevention are so important.

Beyond reforms of public policies and actions of governmental and civil society organizations, also needed are changes in the domain of culture, personal dispositions and shifts
in attitudes to make abuses of human rights less likely, he added.

“Massive and systematic human rights violations lead to harm that can’t be undone,” de Greiff said. “Those who are murdered are really murdered. And we are never going to get them back.”

For more information about the institute, go to binghamton.edu/i-gmap.