Like superheroes, Watson School research focuses on keeping us safe 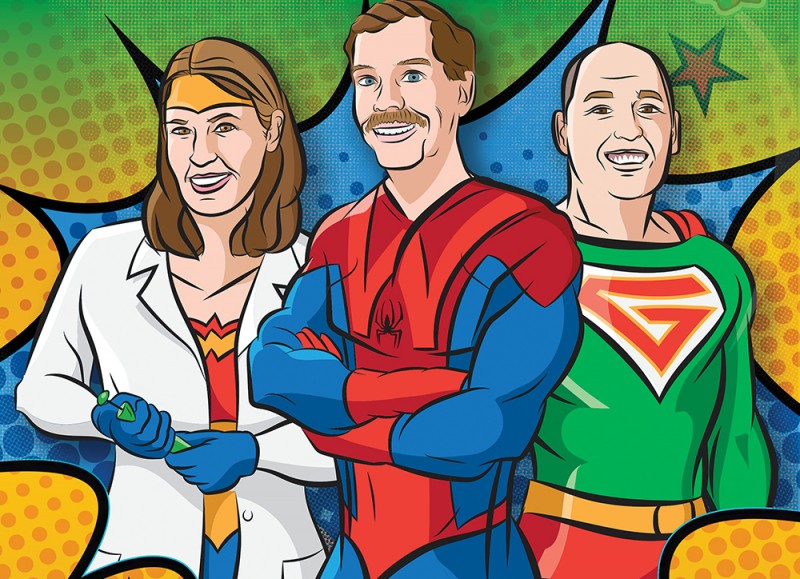 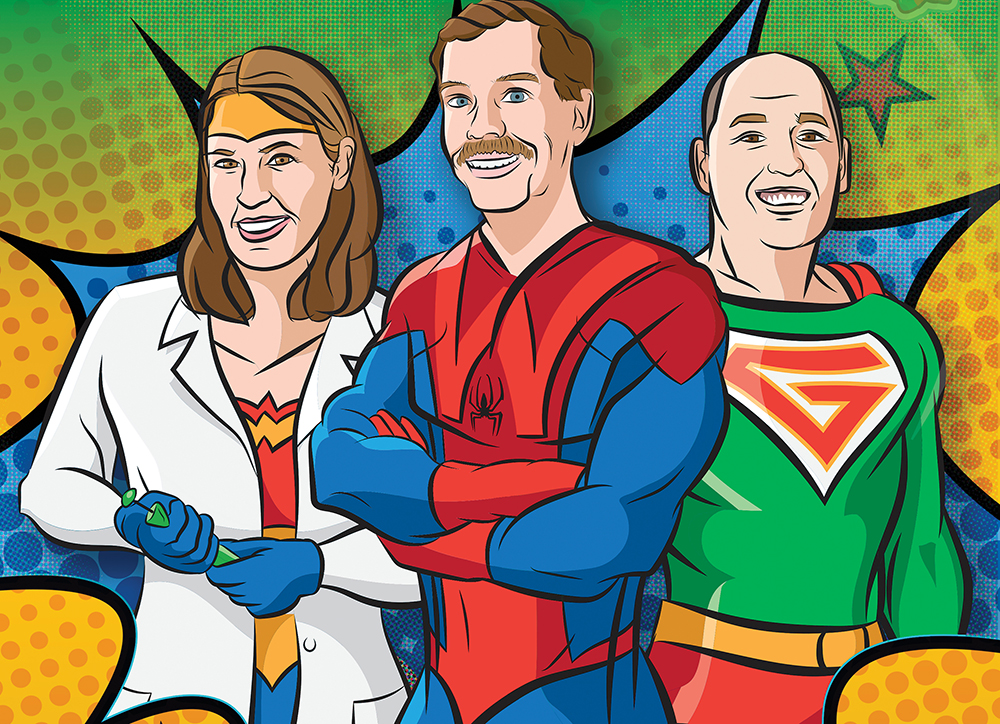 It seems as if Watson Engineers, like movie superheroes, have superpowers.

Some of their cutting-edge work from the past year may help keep you safe in the future.

For the love of skin

Human skin is the body’s first line of protection, and it’s a robust one.

“[There is] a diverse population of microorganisms that naturally reside on your skin. When [skin] becomes ruptured, its barrier function is lost, leaving underlying living tissue exposed to harmful pathogens. These pathogens can cause a variety of diseases and infections,” he says.

German will continue his research into skin with the help of a new, five-year, $500,000 National Science Foundation (NSF) Early Career Development (CAREER) grant. His project — “Understanding the Multiscale Failure Mechanics of Human Skin with Age, Ultraviolet Photodamage and Bacterial Growth” — begins in July.

The fundamental research will explore how aging, ultraviolet light and bacteria weaken skin, cause wrinkles and increase the risk of skin rupture. The results will provide a better understanding of the biomechanical aging process, the onset of skin diseases that could be caused by bacteria in the skin microbiome, and new approaches in skin-based drug delivery in creams and ointments. Some of the results may also be transferable to flexible electronics and energy harvesting units.

Much of the current work in the field focuses on macrotesting equipment and treating skin as a homogenous material, but skin is heterogeneous at many length scales German says, so he plans to look at the tissue microscopically. Experiments will combine immunostaining, mechanical manipulation, high-speed imaging and tractionforce microscopy to show how skin degrades under a variety of conditions.

If taking over drones is a supervillain’s plot, he might want to reconsider.

Christina Stracquodaine ’15, MA ’16, explored how to prevent hackers from taking over drones, which they could then crash into buildings or other aircraft, use to drop payloads on unintended targets or land in enemy territory.

The group addressed cyber vulnerabilities of an experimental quad copter that flew independently with an autopilot and navigation sensors. Researchers created an internal event monitoring system that could detect intrusion. The system is embedded in the autopilot software at key points to minimize computing impact but still be effective.

The embedded system built an in-flight “profile of normal behavior.” If any anomalies indicative of an attack were detected, the embedded system assumed it was a security threat and sent a distress call. In a real-world scenario, that call would give controllers a chance to destroy the drone or force it to land.

The work was part of a series on UAS security and was presented at the 2016 International Conference on Unmanned Aircraft Systems in Arlington, Va.

Instead of running tests on live kidneys, biomedical engineering alumna Courtney Sakolish, PhD ’16, and Assistant Professor Gretchen Mahler developed a model kidney for working out the kinks in medicines and treatments.

The reusable, multilayered and microfluidic device incorporates a porous growth substrate, with a physiological fluid flow, and the passive filtration of the capillaries around the end of a kidney, called the glomerulus, where waste is filtered from blood.

“This is a unique platform to study interactions between drugs and cells or tissues, specifically in the kidney, where current models were lacking,” Sakolish says. “These platforms will, hopefully in the future, be used as an animal alternative during preclinical testing to more accurately direct these studies toward successful results in humans.”

Results suggest that cells grown in the device exhibit more natural behaviors than those grown in traditional culturing methods, and the filtration by the glomerulus is necessary for healthy cell function.

“We found that the more complex, dynamic culturing conditions (like those used in this project) are necessary to accurately predict renal drug toxicity in human systems,” Sakolish says.

Using data from more than 140,000 terrorist attacks between 1970 and 2014, Tutun developed a method that calculates the relationship between features of terrorist attacks (e.g., attack time, weapon type). Mohammad Khasawneh, professor and chair of Systems Science and Industrial Engineering (SSIE), assisted and advised the research.

Comparing the results with existing data shows that the proposed method was able to predict characteristics of attacks with more than 90 percent accuracy. The results support previous findings that terrorists tend to emulate the behavior of other terrorist groups and learn from their mistakes and successes.

“They are learning, but they don’t know they’re learning. If we don’t have social media or other technologies, we need to understand the patterns,” Tutun says. “Predicting terrorist events is a dream, but protecting some areas by using patterns is a reality. If you know the patterns, you can reduce the risks. It’s not about predicting, it’s about understanding.”

Previous studies have focused on understanding the behavior of individual terrorists rather than modeling the relationships of attacks. Detection also often focuses on individual incidents, which does not take into account the dynamic interactions among them.

Tutun believes policymakers can use these approaches for time-sensitive understanding and detection of terrorist activity, which can help avoid future attacks.

Tutun presented his work at the 2016 Industrial and Systems Engineering Research Conference.

“Corrosion-related damage costs more than 3 percent of the United States’ gross domestic product (or about $503.1 billion by 2013 numbers),” Zhou says. “Oxidation of metals is a universal reaction caused by the simple fact that the oxide is more stable than the metal itself.”

Zhou is a co-author of “Early and Transient Stages of Cu Oxidation: Atomistic Insights from Theoretical Simulations and In Situ Experiments,” along with Qing Zhu, Wissam A. Saidi and Judith C. Yang, from the University of Pittsburgh, and Binghamton graduate student Lianfeng Zou.

Public water problems are often caused by corrosion, and understanding it is critical to avoiding future problems.

Oxidation of copper occurs via layer-to-island growth of copper oxide on flat copper surfaces with copper atoms evaporating from the surface, according to the research. Solid oxide, made of copper and oxygen atoms thermally mixed microscopically above the surface, is deposited back on the surface. This differs from the long-held idea of a solid-solid transformation. The observation is counterintuitive because if a surface can be made more uneven, it can resist oxidation better.

Zhou’s work was supported by the Department of Energy.

Beyond public water issues, millions who use private wells could also be at risk.

“Through a collaborative effort with the Virginia Cooperative Extension, I analyzed thousands of drinking-water samples from private systems in Virginia and observed that 58 percent of these systems exceeded at least one Environmental Protection Agency (EPA) drinking-water standard required for municipal systems,” says Kelsey J. Pieper ’09.

Pieper, a U.S. Department of Agriculture postdoctoral fellow at Virginia Tech, majored in mechanical engineering. She was the lead author of “Profiling Private Water Systems to Identify Patterns of Waterborne Lead Exposure” in the journal Environmental Science & Technology.

Young children are most at risk of lead poisoning, as small amounts can result in permanent brain damage.

In samples from homes in Albemarle County, Va., Pieper found a pattern of corrosion in private systems consistent with patterns in municipal systems. The best way to make sure water is safe is to test it.

“Homeowners should contact local or state health departments for more information about testing,” she says. “These organizations also provide resources and assistance for homeowners interested in correcting water-quality issues.”

There really is a spider sense

Mechanical engineering Distinguished Professor Ron Miles helped researchers from Cornell University prove there really is a “spider sense.” Because despite not having ears — or eardrums — jumping spiders can perceive airborne sound.

The 5,800 species of jumping spiders primarily perceive the world through sharp eyesight and the ability to sense vibrations (such as a fly struggling in a web) instead of hearing them.

It was thought they were deaf to airborne sounds.

After sensors were implanted in a spider’s brain, scientists played sounds at the same frequency as the buzz of the predatory mud dauber wasp. Spiders froze in response to the threat — a behavior observed in the wild. Spikes in brain activity were recorded as spiders “listened.”

“I was involved in showing that the experimental setup presented the spider with only airborne sound rather than vibrations through the ground,” Miles says. “We made sure the vibrations were too small to influence the results, and our anechoic chamber, one of the quietest places on Earth, was the perfect place to test that. We demonstrated this and provided a model of the vibration of the fixture that the spider was on when it reacted to sound.”