Desborne Villaruel moved to America from Trinidad and Tobago in 2002. He will earn a bachelor's in accounting, and pursue his master's in the fall. Image Credit: Jonathan Cohen. 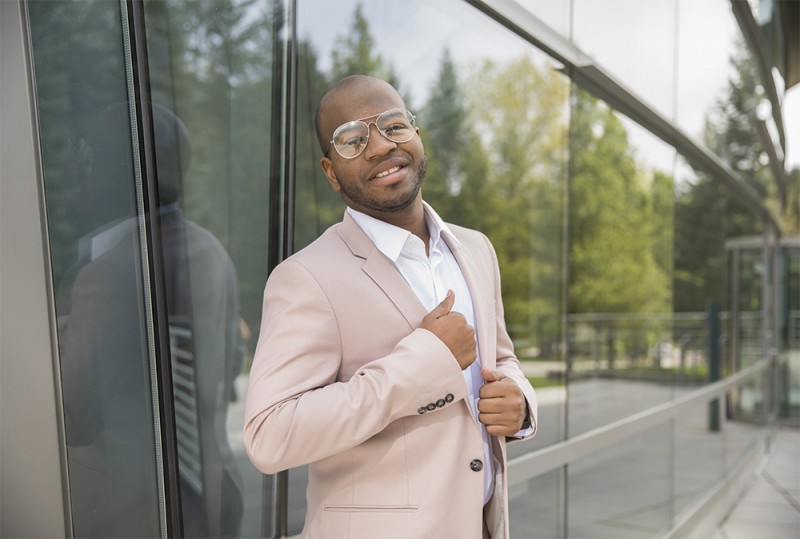 Desborne Villaruel moved to America from Trinidad and Tobago in 2002. He will earn a bachelor's in accounting, and pursue his master's in the fall. Photography: Jonathan Cohen.
By Melissa Wickes

Moving to the United States was scary for 7-year-old Desborne “Dez” Villaruel. Witnessing the Sept. 11 attacks on television a year before his move made it downright terrifying.

Villaruel, who was born in Trinidad and Tobago, immigrated to the U.S. with his mother in 2002. He said they arrived in America with high hopes of a better life and increased opportunities — and that’s exactly what they got.

“We came to America for a better life, but it was really scary coming into a brand new country after seeing all that had happened on TV,” said Villaruel, who is majoring in accounting with a concentration in finance in the School of Management.

He grew up in a small apartment in Brooklyn with his mother, aunt, uncle and seven cousins. Villaruel’s mother worked so much that he only saw her about once a month.

“My mother received no formal schooling past elementary school, so pursuing a college degree was not always a guarantee for me,” Villaruel said.

His citizenship made applying to college more difficult.

“I was still not a legal citizen my junior year of high school. I was scared I wouldn’t be able to go to college,” he said. “I spoke to my guidance counselors and they connected me with the Wall Street Finance and Scholastic Training (FAST) Track Program.”

Through this FAST program, Villaruel was able to connect with mentors in the business field who taught him and other students from low-income backgrounds about finance and to build career aspirations.

“This was the first time I felt like I had the chance to do something more,” Villaruel said.

At the end of his junior year of high school, Villaruel got his green card and started applying to colleges. He was accepted to Binghamton University through the Educational Opportunity Program (EOP).

“Desborne, in my opinion, is the epitome of the mission of EOP,” said EOP Director Calvin Gantt. “Desborne has given as much to Binghamton University and to EOP as he has received. I’m proud to have had the opportunity to be associated with such a scholar and a gentleman.”

Villaruel said his “family” of EOP counselors and fellow peers helped him finally feel like he had purpose. After one semester at Binghamton, he transferred into the School of Management and declared his major in accounting and concentration in finance. Villaruel was accepted into the PriceWaterhouseCoopers Scholars Program his junior year, the SOM honors program focused on developing future leaders through academic excellence, professionalism and unique networking opportunities.

“Desborne has served as a great example, showing students that, when done correctly, they can achieve academic excellence, success at their job and remain actively engaged in the campus community,” said Karima Legette, a senior academic counselor in the EOP Office. “While he’s affected by the same stressors as other students, he learned to manage many of those feelings by remaining in control of his time and seeking guidance from a variety of campus resources.”

Villaruel said he loves to network, and it’s a skill that helped him get internships at Morgan Stanley, EY and the Benjamin Banneker Academy.

“Due to the support I received from Binghamton as a whole I was able to achieve a lot,” he said. “My lowest grade in college was an A- and I’ve been on the dean’s list every semester.”

He’s also been a part of several organizations on campus, including SHADES, Quimbamba, National Student Exchange and the Juvenile Urban Multicultural Program. Villaruel is a resident assistant in Newing College; tutors in calculus, economics and accounting; and volunteers through EOP.

Villaruel said it would be “impossible” for him to choose just one thing to stick with for the rest of his life.

In the fall, he will pursue a master’s in accounting at Binghamton and study for the Certified Public Accountant Examination. Ultimately, he wants to work at one of the “Big Four” accounting firms.

“I want to build my network through my future experiences and eventually open up a nonprofit that teaches financial literacy to students who don’t have access to these resources,” Villaruel said. “I want to give them hope.”