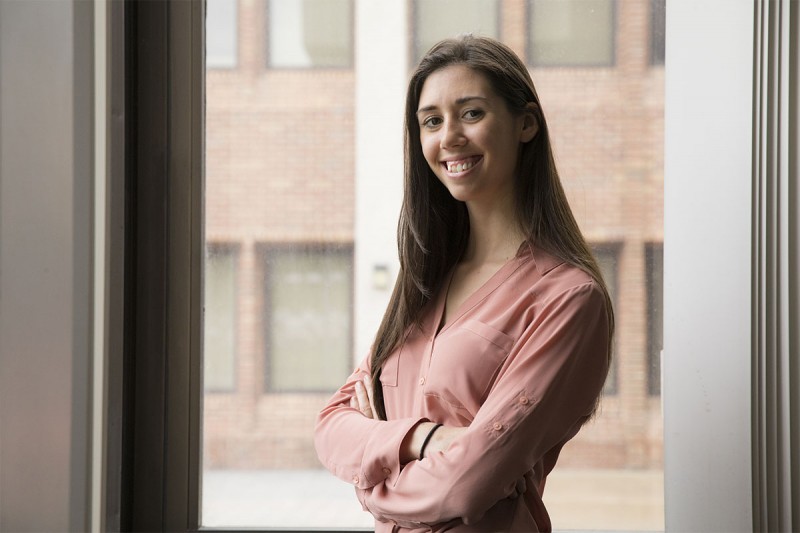 While some people dive into their work, Rachael Shaw lived with hers.

“It was such an amazing project,” said Shaw, a double major in psychology and human development from North Babylon, N.Y. “Too often I think researchers are separate from the population they are studying. It was great to hear the perspective of the veterans and to collaborate with them.”

The NSF funds intensive summer programs where students live at other universities to conduct research. Shaw was with four other students and five veterans, and said that her roommate was one of the strongest people she’s ever met. Shaw said the veteran, who is in her late 20s, had been on tour for about six years and has faced a multitude of hardships not obvious to the rest of us.

“Due to sandstorms, the air quality is deemed unlivable in some of the countries our veterans are deployed,” Shaw said. On top of the trauma caused by war itself, there is a whole different struggle of being a female in the military, she added.

After graduation this week, Shaw will present her research in Boston at the Association for Psychological Science conference. Her project focuses on attachment and the effect of social support on veterans who have Post Traumatic Stress Disorder (PTSD).

“Everyone always makes fun of me because I pick the dark stuff, but I’m really interested in trauma and human resilience,” Shaw said.

Shaw studies in two research labs at Binghamton. She works in a sex and gender lab under the supervision of Ann Merriwether, lecturer in psychology and human development, and Sean Massey, associate professor in women, gender and sexuality studies. She conducts both independent and group projects there. Shaw also works in the Couples Adjustment to Stress and Trauma Lab (CAST) under the supervision of Christina Balderrama-Durbin, assistant professor in psychology.

In the sex and gender lab, Shaw said, she had a lot of freedom to explore her interests and pick her own research topic. Her honors thesis focuses on intoxicated hookups and confidence in consent.

“It’s really interesting to look at consent on a scale because most studies on consent have a black-or-white answer,” Shaw said. “But there is a gray area. Only about 21 percent of people were absolutely confident that they gave consent in their last hookup in which alcohol was involved. A lot of people fall in the 2 to 5 range on a scale from 1 to 7.”

Shaw became interested in trauma when she interned for the Interpersonal Violence Prevention Program during her first year at Binghamton University. She was an educator on campus about sexual assault and bystander intervention, as well as served as an advocate for those who were sexually assaulted. Now she’s an intern at Rise - Comprehensive Domestic Violence Services, in Endicott, N.Y.

“My goal for the future is to understand how we foster resilience,” Shaw said. “Some people have the ability to overcome such intense trauma and it motivates me to want to help others do the same.”

As lead tutor for the University Tutoring Services, president of the Psi Chi International Honor Society and business manager for Student Association Ink, Shaw knows a lot about balancing a busy schedule. She said she gets joy out of being surrounded by people and learning from them.

“A lot of being a leader is clearly communicating with people all the time,” Shaw said. “You have to trust that you have a good team. Organization is so important in every aspect of life, especially if you want to be a leader.”

Shaw plans to pursue a doctorate in clinical psychology at the University of Buffalo, where she will study alcohol and PTSD.

She said she’s grateful for the friendships she made in Binghamton.

“I’ll always remember just sitting in my kitchen with my friends,” Shaw said. “We started this thing where we record each other randomly, like a cooking fail or something, and we call the videos #everydaymoments so that we’ll always have them.”