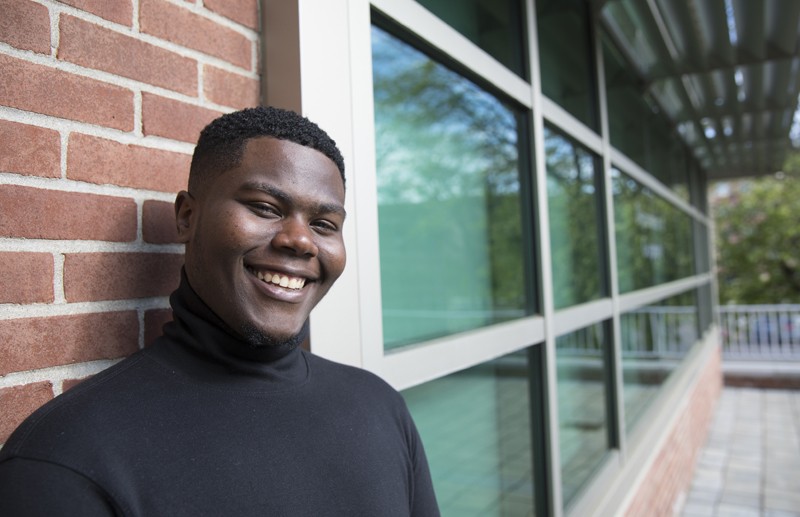 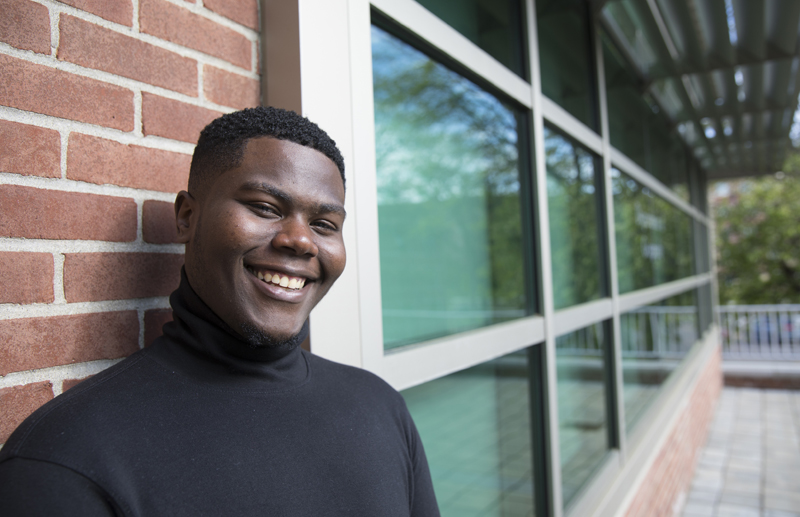 Frank Tolbert, who received his bachelor's degree in geography, will remain at Binghamton University to pursue his master's degree. Image Credit: Jonathan Cohen.
By William Livingston

In high school, many of Frank Tolbert’s black and Latino friends from the Bronx had asthma.

His research at Binghamton University helped him learn why.

“If you look in the North Bronx, where they’re wealthier and predominantly white, their asthma hospitalization rates are incredibly low in comparison to the South Bronx,” Tolbert said. “There’s a direct effect to how we have settled African-Americans and Latinos in the South Bronx.”

Tolbert, who graduated in May with a degree in geography, used urban planning to understand how different groups of people are affected by their surroundings. His research focused on the child asthma rates around the South Bronx, where all of the New York City Housing Authority buildings are.

“I was able to learn all of the triggers that factor into a lot of African-Americans and Latinos in the South Bronx being sick,” Tolbert said. “I found a correlation with major roadways and with major truck traffic. One-third of New York City’s trash is actually processed in the South Bronx.”

Tolbert presented his research project at Kent State University last year. Despite being one of only two undergraduate students to present alongside doctoral candidates, Tolbert came in sixth place.

“All of the confidence that I have in my academics comes from the resources that Binghamton gave me,” he said.

Tolbert actually found his calling in urban planning by chance. He took his first geography course the summer before his freshman year at Binghamton University through the Educational Opportunity Program (EOP).

“They put me in my first geography course and I loved it,” he said. “I learned what urban planners do — they utilize communities to best create sustainable lives for people.”

EOP got Tolbert’s foot in the door at Binghamton University. The program gives lower income students and underrepresented minorities an opportunity to attend SUNY schools.

“Basically, that program helped me come to Binghamton, sped me up and put me on track to join the rest of the students,” he said.

Tolbert said that finding support within the Binghamton community is the key to success.

“John Frazier, my advisor, really gave me the resources to be where I am today,” he said. “For anyone coming to Binghamton, if you really want to be successful, find an advisor who will have your back and make sure you’re good.”

Tolbert made lifelong friends at Binghamton who pushed him to work hard and stay focused on his future.

“I also have one friend, Ashley Lopez, who has been in my life since the Educational Opportunity Program. She grounds me academically and we keep each other on track,” he said. “In school, you need a friend around you who will tell you when to have fun, and when to sit down and focus on your studies.”

In addition to his research on urban planning, Tolbert worked in public service, applying his knowledge by advocating for underserved communities. Last election cycle, Tolbert dedicated an entire year to the Hillary Clinton 2016 presidential campaign.

“Yes we lost, but it was the greatest experience ever. I feel like I truly know the ins and outs of the political system,” he said. “I was actually able to meet Hillary Clinton. She took my phone number down. I was able to email the campaign and after all of my work they wrote me a letter of recommendation for graduate school.”

Although the Clinton campaign wasn’t a success, Tolbert remains positive in his efforts to create change.

“The greatest thing that came out of the election for me was the loss,” he said. “The loss turned me into a workaholic. I’m working to restore what I feel was lost in the election.”

Tolbert will continue his work in public service and geography at the graduate level in Harpur College, where he’ll pursue a master’s degree.

Though the world of public service is unpredictable, he believes there is one tactic that any aspiring public servant should stick to.

“You need to be yourself. Find your own voice and follow it,” he said. “Don’t try to be anything else other than your true, genuine self.”