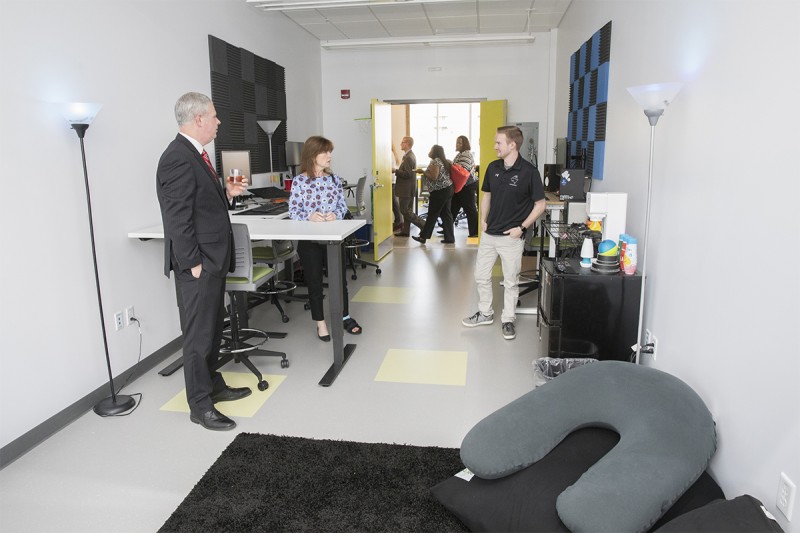 “This was a complicated collaboration of many public and private entities working to put this together,” he added. “Nobody could have done it alone.”

Support for the incubator came from:

The new $19 million, 35,000 square-foot facility includes offices, high-tech labs, wet labs, dry labs and common areas, as well as co-working spaces that will encourage collaboration between companies. It was built to provide a supportive environment for entrepreneurs and startup companies.

“We hope this building will be a place to gather in the future and for companies to graduate from as well,” Stenger said, as he thanked the many partners who worked to bring the facility to fruition. “This building has the feeling of still being created, and that’s intentional. It’s an incubator where things start and that’s a metaphor for the construction here.

“The startup companies here all understand the important part is not that they’re here, but that they graduate from here,” he added. “We’re going to see these companies – about a half dozen per year – graduate. I thought it was a little corny when we coined the term Southern Tier Soaring, but it’s an apt description and we’re ready to soar with this incubator.”

“A game changer for Broome County and communities throughout the region, the Koffman Southern Tier Incubator will provide endless research and development opportunities for 21st-century businesses, while creating an environment for entrepreneurs to thrive and grow,” Gov. Andrew Cuomo said in a news release. “By continuing to support innovative projects like this technology incubator and fostering job creation, this administration is committing to ensuring the Southern Tier soars for years to come.”

Though unable to attend the opening, U.S. Sen. Charles “Chuck” Schumer sent his message in a letter, read by aide Amanda Spellicy, who vividly recalled Schumer waving a bright flag at the groundbreaking for the incubator in October 2014. “Waving that flag was an example of his passion for the project,” she said.

Schumer called the building ambitious and exceptional. “It’s a product of hard work and collaboration and must be celebrated,” he wrote. “At its heart is its entrepreneurial spirit designed to cultivate support and grow the high technology companies of the future, while helping to shape the advancements of tomorrow. It’s the embodiment of the best the Southern Tier has to offer and will serve as a catalyst to spur more.”

“We’re now full circle at SUNY Broome, which started in downtown in 1946 in the old armory,” said Kevin Drumm, SUNY Broome president. “And now, we’re back downtown with the third floor of this building and happy to be back, where we can expose as many students as possible to what it will take to start a business. We’re looking forward to launching many businesses here at the incubator.”

In partnership with Binghamton University and SUNY Broome, the Koffman Southern Tier Incubator will provide entrepreneurs and startups with the knowledge and resources they need to build a sustainable business. Incubator programs will include a variety of workshops, seminars, mixers and mentoring. They will also have access to the schools’ skilled workforce, facilities and human resource programs such as internships and co-ops.

The facility will also include wrap-around financial, legal and regulatory resources and services, Stenger said, including colocation of the Small Business Development Center and the Trade Adjustment Assistance Center.

“Binghamton University’s Downtown Center sparked a new era of renewal 10 years ago and we’re now seeing fruits of that activity,” Akshar said. “Today’s grand opening is building on that momentum to create opportunities right here in the heart of downtown. But I offer that the work doesn’t stop now. It’s incredibly important that we realize we can’t just sit back. It really takes all of us working together to communicate and partner with one another.”

Calling it a long-awaited project, Lupardo added that the incubator is really “a long-awaited dream and hope, so much more than a project. It’s a unique collaboration of all partners working toward the same goal to bring new life to the area. It’s encouraging a new culture, an entrepreneurial culture of those who innovate, create and take risks,” she added. “This incubator, I’m certain, will do that. Let’s get creating.”

Broome County Executive Jason Garnar and Binghamton Mayor Richard David also spoke, both reiterating the partnerships that made the building possible. Garner said the building “doesn’t mean that we’re done. Our takeaway is that we can come together for a great purpose – jobs, hope, revitalization – that will give our community what it deserves.”

Noting how dilapidated the block the incubator sits on was, David said the building has transformed the area. “For several months and beyond we’ve had a host of activities because of this building. Fifteen years ago when the University Downtown Center was built, it was also catalytic. We’re operating at a much higher level now and know the role we can play in the growth of the region and economic development. This is a treasured asset.”