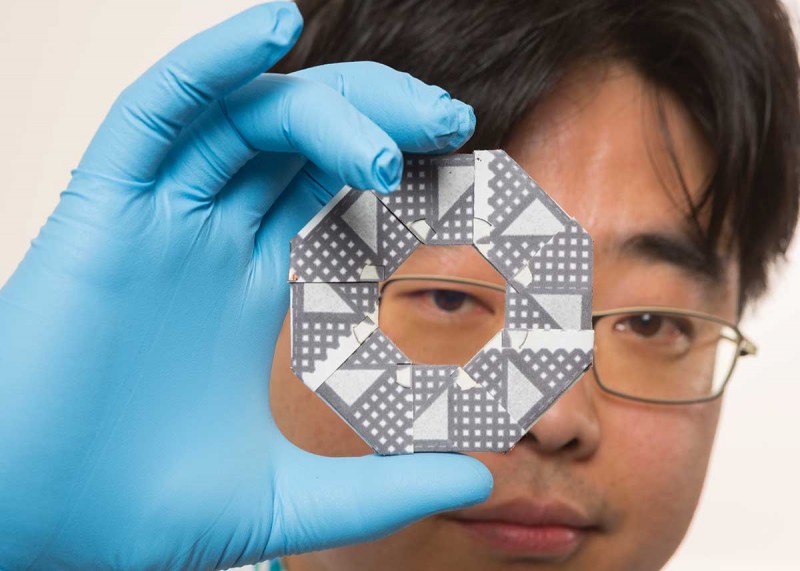 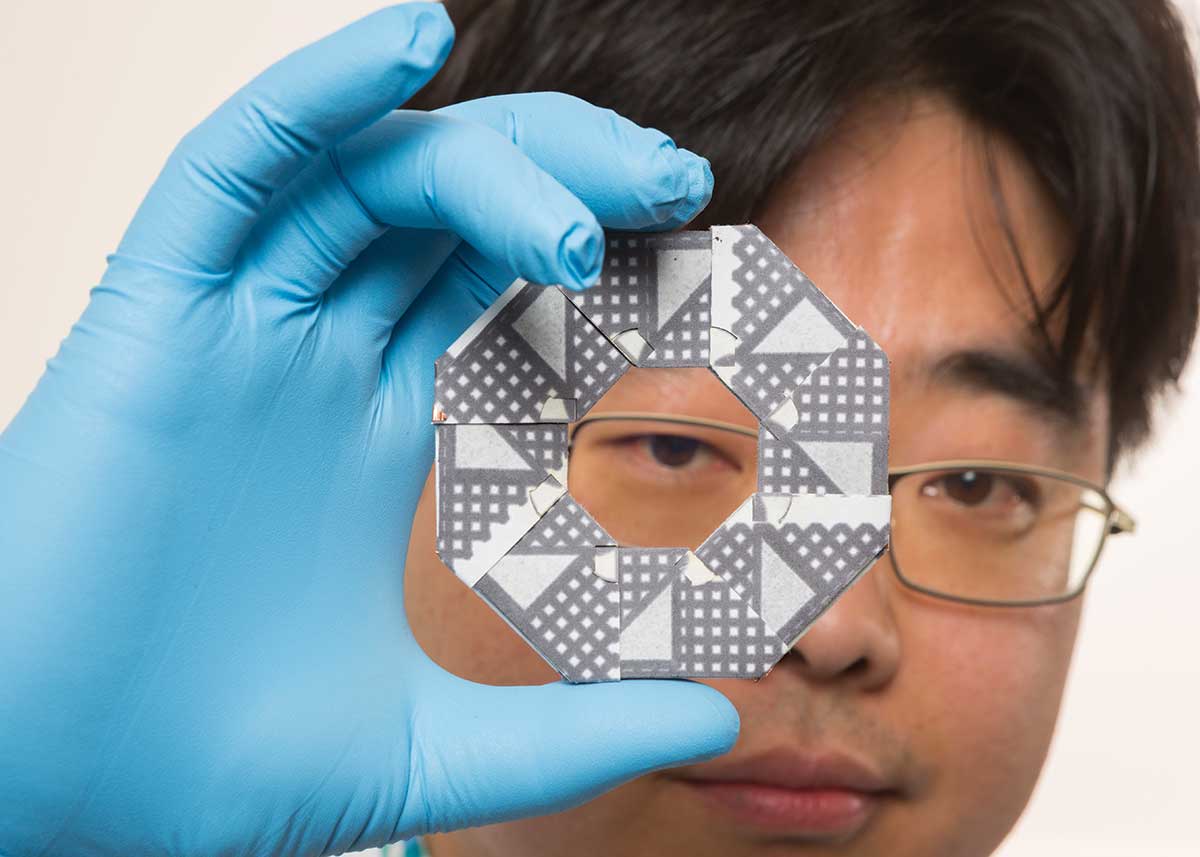 In the 1987 movie Innerspace, a cocky Navy test pilot (Dennis Quaid) undergoes a top-secret miniaturization experiment and is accidentally injected into the body of a hypochondriac store clerk (Martin Short). And since it was the ’80s, hilarity ensued.

The film has an 81 percent rating on Rotten Tomatoes, an Academy Award for Best Visual Effects, and it inspired Binghamton University Assistant Professor of Electrical and Computer Engineering Seokheun Choi to become a scientist.

“[The movie] fascinated me. The possible combination of microtechnology and the human body was fascinating,” Choi says, looking back at his teenage years. “It substantially affected my career path and motivated me to pursue science, engineering and, especially, micro- and nanobiotechnologies.”

That initial spark has turned into a string of recent projects connecting microtechnology and the human body through the development of bacteria-fueled paper batteries and fuel cells. The battery projects, in particular, are designed to power health sensors in remote or dangerous locations.

“I knew the movie was science fiction, of course, but I wanted to create things that could change the fiction of using microtechnology to protect the human body into fact,” Choi says.

Saving lives with bacteria and paper

By the time Choi joined the Thomas J. Watson School of Engineering and Applied Science faculty in 2012 — after early career experience in industrial battery R&D, doctoral studies at Arizona State University and research work at the University of Cincinnati — he knew bacteria could be the microscopic building blocks that would let him bring technology and body together.

The concept of bacteria generating electricity through cellular respiration dates back over 100 years, but Choi wanted to use it to make a bacteria-fueled battery to power sensors attached to a patient’s skin. The batteries and sensors, for measuring heart rate, blood glucose or infection levels, are most needed in remote, rural or dangerous places where stable power sources aren’t available or have been destroyed.

The problem was that there were no practical designs small, light or durable enough to be used in those environments. To build biobatteries in the lab, Choi was using plastic, glass and silicone materials to hold the necessary anode (negative terminal), cathode (positive terminal) and bacteria-rich wastewater electrolytes; but the materials were expensive and rigid.

“We had the means to generate the power we needed — bacteria can be found in wastewater anywhere on the planet — but there wasn’t the right design to harness that in the field,” Choi says. “I kept asking myself, ‘What would be the most practical and cost-effective device platform?’”

While exploring his options, he decided to try a counterintuitive building material that was just beginning to be tested: paper.

“Paper is extremely cheap and light,” he says. “It is disposable, which is desirable, since some devices monitor infectious diseases and must be destroyed after use. It is biocompatible and provides a large surface area to promote microbe growth. Paper also does not require any pumps or tubes because capillary force can move liquid without any external energy [making the battery more efficient]. It does everything we need. We are not the first to generate electricity with bacteria, but we are among the first in the world to combine paper with bacteria in this way.”

In June 2015, Choi had his first major battery breakthrough at Binghamton with a design about the size of a matchbook that could be folded easily and was powered by just a few drops of bacteria-rich wastewater. He has improved on that since.

“The concept of the paper-based [batteries] is straightforward, but making it a reality is not easy, and improving the device performance is even more difficult. For example, we need to make sure cathode materials do not react with the cellulous fibers or the wax in the paper and do not permeate to other parts of the device and compromise performance. Plus, they need to be fabrication-friendly and inexpensive to justify the potential applications,” says Yang Gao about the stipulations of the building materials. Gao is one of Choi’s research assistants and an electrical engineering PhD candidate. “Before these projects, I worked with wind and solar energy. I’d never thought about using paper and bacteria to make biofuel cells or batteries.”

Overall, the amount of electricity generated by the batteries is very small — microwatts. It would take millions of paper batteries to power a 40-watt light bulb, but raw power isn’t the goal.

“There may be a way to scale these up in the future. But, for right now and not to overstate anything, we are building these to help save lives in rural or war-torn places,” Choi says.

The building materials are unique. The designs are eye-catching.

That first breakthrough in June 2015 was predicated on assembling the battery using the ancient Japanese art of origami. A specific folding pattern was needed to create the connections to make electricity flow.

A year later the group unveiled an evolved design inspired by Japanese ninja throwing stars, in which eight paper batteries were folded together to connect in a series.

“Another huge advantage is how easily paper can be folded and unfolded with the origami technique. It makes the batteries easier to travel with and also allows us to explore designs that aren’t possible with rigid materials. Certain folding patterns allow us to run multiple batteries in parallel or in series, which is more than we could do with metals or plastics,” Choi says. “The ninja star shape is a great example of how to combine multiple individual batteries into a single, stronger unit.”

The innovations don’t mean Choi will stop pushing the bacteria-fueled envelope, either.

“I am the first person working with textile-based biobatteries in our lab, instead of paper-based. The basics are the same, but the fabrication is completely different. I have had to use my home-economic lessons from high school to remember how to use a sewing machine,” says Sumiao Pang, also one of Choi’s research assistants. She is in the accelerated biomedical engineering master’s degree program. “I think that both paper and textile-based devices have a bright future. There is a deep interest in renewable and wearable energy, so wouldn’t the best way to develop it be by utilizing what is around us or what we wear?”

Choi added: “We are pursuing many other projects: compact and self-sustainable biobatteries for wireless sensing networks, flexible and stretchable textile biobatteries for flexible electronics, more complex biosolar cells and biofuel (bioethanol) generation. I strongly believe a good part of the future of energy will start with microorganisms. I don’t think those microorganisms will be miniaturized Navy pilots, but who knows?”

Choi helped design a biological solar cell that was roughly a million times more effective than other technology of the time. The main improvement was to switch the thin strip of gold or indium tin oxide anode to a carbon anode immersed in bacteria-laden fluid.

Choi developed a battery that was about the size of a matchbook, could be folded up for easy storage and transport, and cost about a nickel. Made of paper, it generated electricity through the metabolic processes of bacteria that fed on wastewater.

Choi and his team, for the first time, connected nine biosolar cells into a biosolar panel. It continuously produced electricity and generated the most wattage of any existing small-scale project at the time — 5.59 microwatts.

The next step in the evolution of the origami battery project was a design inspired by ninja throwing stars. The new version is about 2.5 inches wide and has an increased power and voltage output, since it is eight small batteries connected together.

On one half of a piece of chromatography paper, there is a ribbon of silver nitrate underneath a thin layer of wax to create a cathode. A reservoir on the other half of the paper acts as the anode. Once properly folded and a few drops of bacteria-filled liquid are added, the microbes’ cellular respiration powers the battery.

The first microscale self-sustaining fuel cell was demonstrated. In a chamber about one-fifth the size of a teaspoon — 90 microliters — researchers placed a mixed culture of phototrophic and heterotrophic bacteria. After some help, the two bacteria symbiotically worked together to generate power for 13 straight days.