A Place Where Ideas Can Thrive 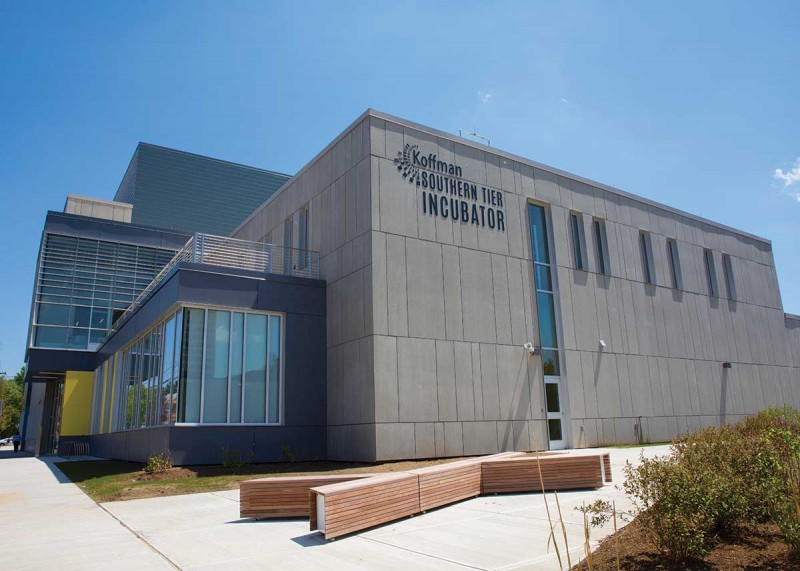 Take 20 people out of their circa- 1960s offices — with doors — and transplant them into a wide-open, light-flooded room scattered with desks, funky stools and comfy chairs. The walls are bright yellow, and you can write on them.

Welcome to the “sandbox,” part of the third floor of the newly opened Koffman Southern Tier Incubator in downtown Binghamton.

The Incubator is designed to give startups a place to take root and, within five years, grow into self-supporting companies that will move into the community. It features more than a dozen suites, 10 wet labs, 12 dry labs, four co-working collaborative spaces, event spaces, a conference room, administrative office space and more, says Daniel Mori, Incubator director.

After the building opened this spring, Binghamton University’s Communications and Marketing team moved in temporarily and gave the space a trial run. Some of us claimed adjustable desks (you can sit or stand!), while others preferred to be laptop-toting nomads, happy to sit in the green recliners one day and perch on the stools at the “window bar” the next.

The interior is part blank slate, part “we-know-you-need-this” innovation. Consider the staircase between floors 1 and 2: There are normal steps on the left, but on the right are larger, deeper steps that function as amphitheater-style seating. Or a backdrop on which to shoot a commercial, as was done recently.

Seven startups were in place in May. They will receive support, including training and mentoring, through Binghamton University’s office of Entrepreneurship and Innovation Partnerships.

“In five years, we hope to have graduated between 10 to 20 companies that are sustainable in our community,” Mori says. “That’s the essence of the incubator, to have a transient group of people coming in to use the facility, to serve their needs and have them leave better than they were when they got here.”

In the meantime, we’ve given our feedback (um, nice closet; needs hangers), erased the walls and returned to our offices. And we’re already missing the vibe.